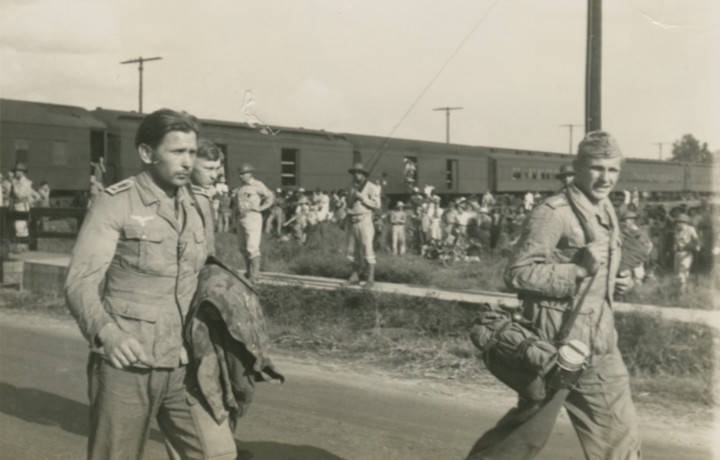 In 1940, Aliceville in Pickens County, Alabama was an isolated, rural small town with a population of around 2,000 located in West Central Alabama. Starting in the summer of 1943, the population swelled to almost 10,000 in one year. 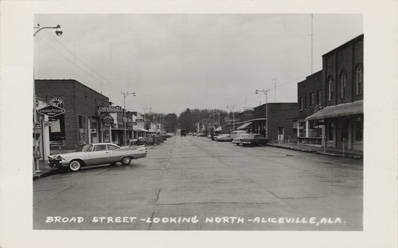 During WWII the United States government was faced with the task of where to house a large influx of German prisoners after an overwhelmingly decisive victory at the Battle of El Alamein and in North Africa in November 1942.

Allied forces under General Bernard Montgomery devastated Field Marshall Erwin Rommel’s famous Afrika Korps, which resulted in the surrender of nearly three hundred thousand Axis soldiers. The U. S. Provost Marshall Generals office looked for sites to build internment camps for the prisoners and Aliceville as well as three other sites were chosen to house the prisoners in Alabama. 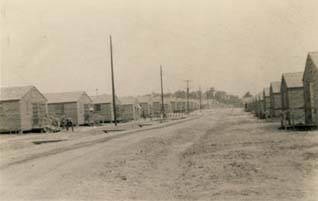 The Aliceville Internment Camp held up to 6,000 German prisoners of war in 1943.  The camp received its first prisoners in 1942 and closed in 1945. The majority of the prisoners were captured in 1943 from the German Afrika Korps. 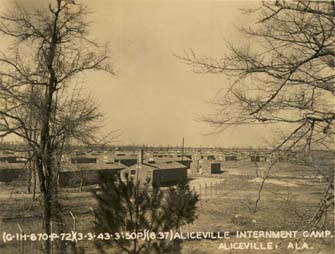 Full Employment for the town of Aliceville

Under the supervision of Major Kark H. Shriver, Corps of Engineers, the Aliceville camp in Pickens County, Alabama was rapidly erected in the fall of 1942. Up to $75,000 per week was pumped into the Aliceville economy that fall with rooming house filled to capacity and by Christmas, the town experienced nearly total employment. 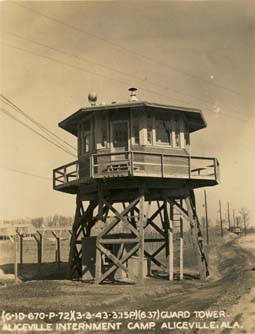 Headquarters building at the POW camp in Aliceville, March 1943 (Alabama Department of Archives and History) 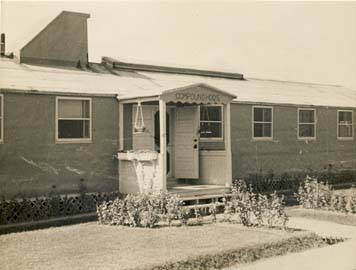 The camp with 400 frame barracks was activated on December 12, 1942. However, the camp remained empty until the spring of 1943. 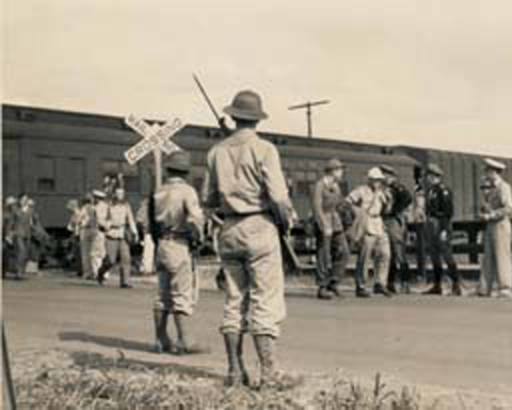 On the late afternoon of June 2, 1943, “companies of soldiers stood along the entire length of the highway that stretched from the railroad station to the camp.” 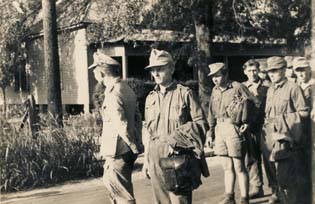 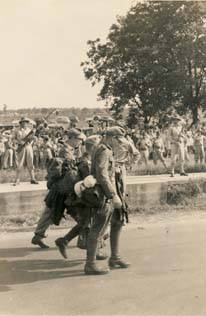 The soldiers were armed with rifles, machine guns, shotguns, and pistols. It was unquestionably the greatest show of armed force most of the onlookers had ever seen, an “event,” wrote one correspondent, “that rivaled the cyclone that hit Aliceville six years ago.” 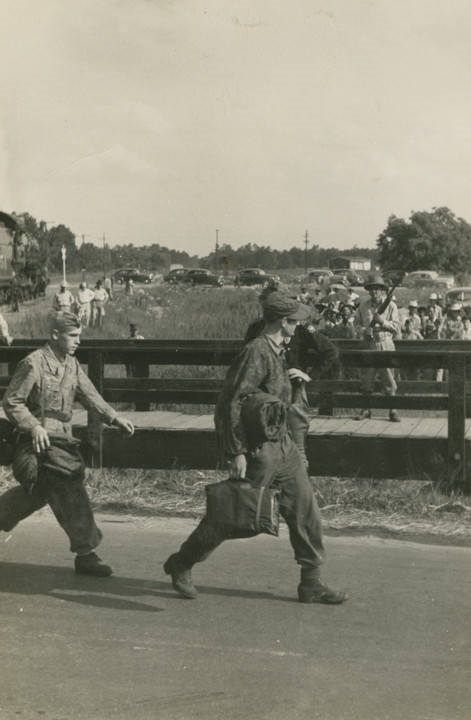 A large crowd was on hand when the train pulled up to the depot and 500 members of the “once invincible Afrika Korps poured off the train and stood blinking in the glare.” The prisoners wore an assortment of tattered uniforms and “clutched meagre stores of possessions in their hands: tattered duffle bags, an occasional musical instrument, a checkerboard.”

German Prisoners getting off train in Aliceville, Alabama  (Alabama Department of Archives and History) 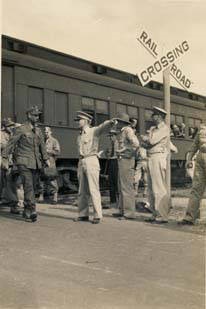 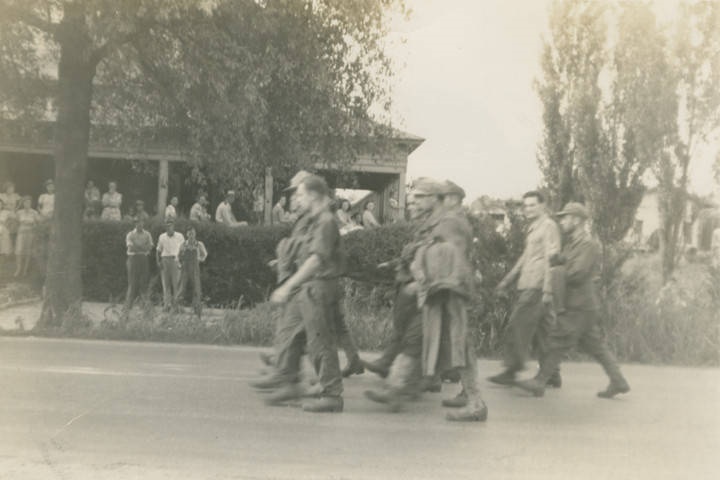 Once they were off the train, a guard moved down the lines and asked if anyone spoke English. “A slim, bespectacled man in a torn, blue coat slowly raised his hand.” He was led to the front of the formation and the prisoners were marched to the newly built camp. By the end of the week 3,000 prisoners were being held at the prisoner-of-war camp. 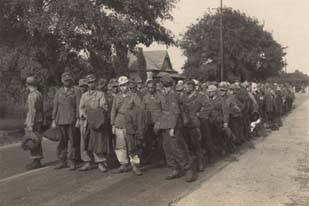 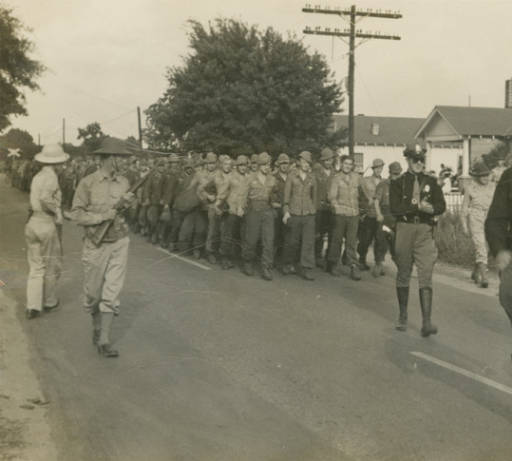 Colonel F. A. Prince was the commander of the Aliceville camp. Many of the prisoners had suffered from scant food and were severely malnourished so the commander made the decision to open the mess hall that night.

At 2 A.M., the first night, the prisoners sat down to their first substantial meal in months. Some of the prisoners thought the abundance of food was a trick, an edible form of propaganda that would soon end, but they soon discovered this was not the case. As the camp population grew, 21,000 meals were provided daily to the 6,000 prisoners.

Life in the camp was governed by the third Geneva Convention. Early on, the United States and Britain had pledged that all their POW camps would strictly adhere to the Convention, initially adopted in 1929. This convention (treaty) defined humanitarian conditions for prisoners of war by providing a list of what was and wasn’t acceptable treatment.

Shortly after the prisoners’ arrival in Aliceville, an unknown respiratory illness occurred among the prison population and some prisoners began to die. The medical staff was at a loss as to what the illness was until doctors Captain Stephen Fleck, Captain John Kellam and Major Arthur Klippen solved the respiratory mystery.

Autopsy results on some of the patients indicated a form of diphtheria and bacterial tests finally confirmed that it was pharyngeal diphtheria, a form of the disease virtually unknown in the United States. Once the diagnosis was made, Schick tests to determine immunity were done and it was discovered that over 1,200 soldiers had tested positive. Immunization began immediately, and within days the results were encouraging and halted deaths to the disease.

Gardens and pathway between barracks at the German POW camp in Aliceville, Alabama (Alabama Department of Archives and History) 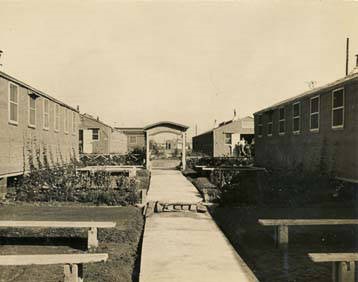 “Arrayed around the barracks were mess halls, a hospital, several small indoor theatres, recreation areas, and storage facilities, a small city. Some of the barracks had radios. Within a week, the prisoner population had ballooned to over 3000, and the workforce of captives had begun to transform the camp.

Elaborate landscaping in a garden between barracks at the German POW camp in Aliceville, Alabama ca. 1943. German sentence says “Through German character the world will be healed.” (Alabama Department of Archives and History) 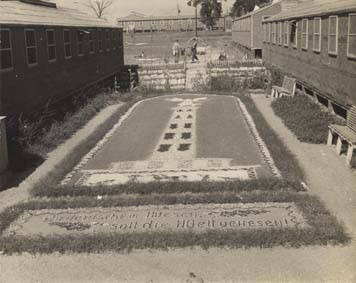 Wearing blue denim uniforms with the letters “PW” stenciled across the back, they toiled diligently in their spare time, improving their quarters and the grounds. They also took charge of their own cooking, and the smells of German pastries, of baking ham and boiling cabbage, soon permeated the air.”

German prisoners working in the Greenhouse in camp ca. 1944 (Alabama Department of Archives and History) 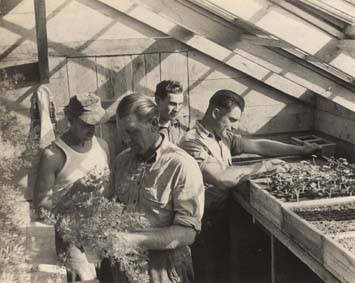 German prisoners of war playing soccer at the POW camp in Aliceville, Alabama (Alabama Department of Archives and History) 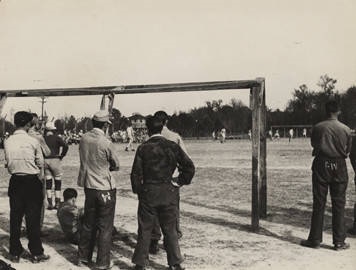 Prisoners received 80 cents a day for their labor, wages that could be spent on “luxury items” in commissaries within the camps.

“Life within the camps was so comfortable that one German prisoner wrote his family and described his temporary home as a “golden cage” and, conversely, some Alabama residents resented what they perceived as the POWs’ pampering while they endured rationing. Few POWs attempted to escape, and several of those who did were killed in the attempt. The comforts of camp life discouraged most escape attempts, however”i

“The only dangers within the camps were the periodic political struggles among the prisoners. German soldiers committed to National Socialism (Nazism) fought with fellow prisoners who displayed anti-Nazi sentiments. To head off such ideological conflicts, American camp personnel separated Nazi and anti-Nazi factions within Alabama’s camps. Army officials then moved the two groups into special camps located outside of Alabama.”ii

Nothing is left at the site of the camp in Aliceville now. Everything has been torn down but the Aliceville Museum and Cultural Center has preserved and promoted the WWII experience in Alabama and houses valuable artifacts and records of the camps. Many friendships developed between prisoners and guards and some prisoners have even returned to Aliceville for a reunion.

Other German war prisoners were held in Alabama at camps in Opelika, Fort McClellan, and Fort Rucker

Here is the actual Feb. 1942 [film, photograph & speech] of the USS Alabama battleship being launched which is now a museum ship in Mobile, Alabama

ALABAMA FOOTPRINTS Pioneers: A Collection of Lost & Forgotten StoriesStories include; The Yazoo land fraud; daily life as an Alabama pioneer; the capture and arrest of Vice-president Aaron Burr; the early life of William Barrett Travis, the hero of the Alamo; Description of Native Americans of early Alabama including the visit by Tecumseh; Treaties and building the first roads in Alabama.