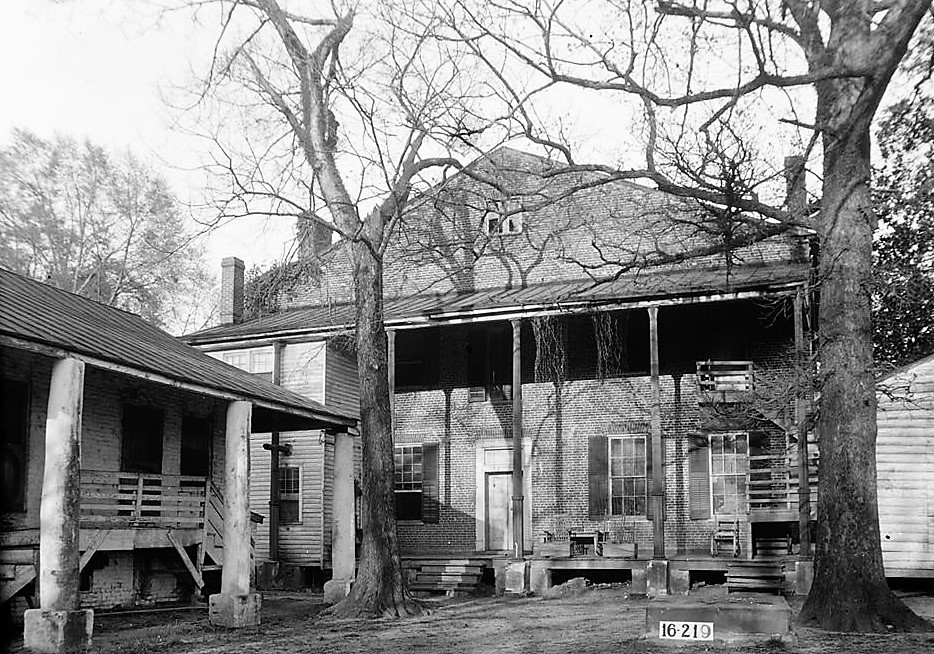 Today Magnolia Grove, located at 1002 Hobson Street in Greensboro, Alabama is a historic site and museum located in Greensboro, Hale County, Alabama that is overseen by the Alabama Historical Commission. The site hosts the Magnolia Grove Christmas Open House on the second Sunday in December.

On a knoll far back from the head of Main Street of Greensboro stands this majestic old Hobson home known as Magnolia Grove. This is one of the shrines of Alabama. It is reached by a graceful winding walk and a circular driveway. The flower garden joins the vegetable garden and orchard and is most attractive. The ten beautiful magnolia trees, mystery trees of the South, with other trees, from the twenty-acre grove. 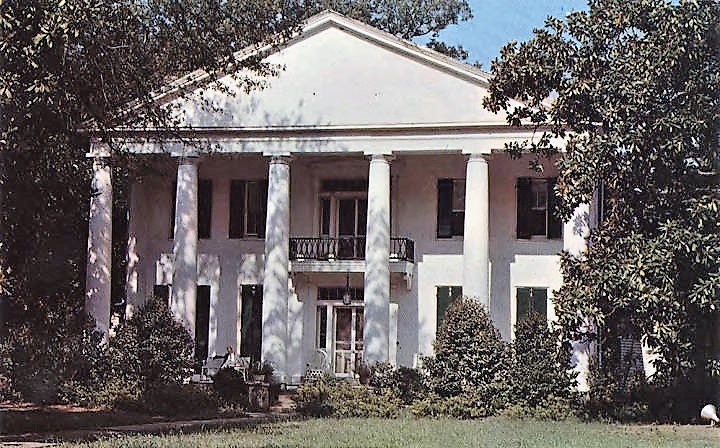 Built in early part of the eighteenth century, of bricks made on the place by slaves. The home is spacious, eight rooms, high ceilings, wide halls and verandas full length of the house. Across the front are columns of solid masonry; in the rear they are of fluted iron, which are supposed to have been brought from England. In the wide entrance hall there is a winding stairway, which is unusually distinctive and handsome, the most interesting feature of the house to many people. 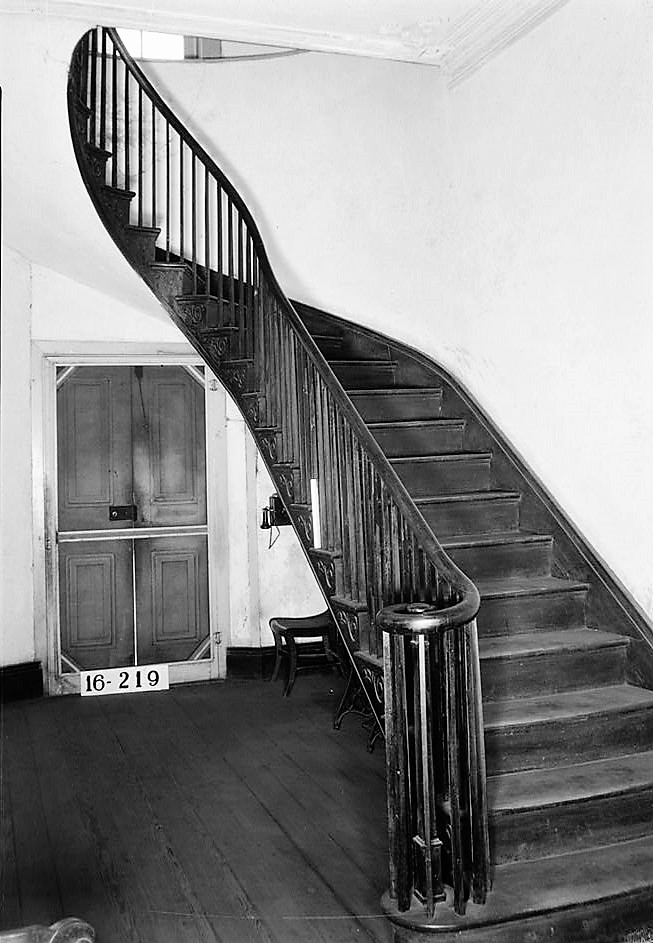 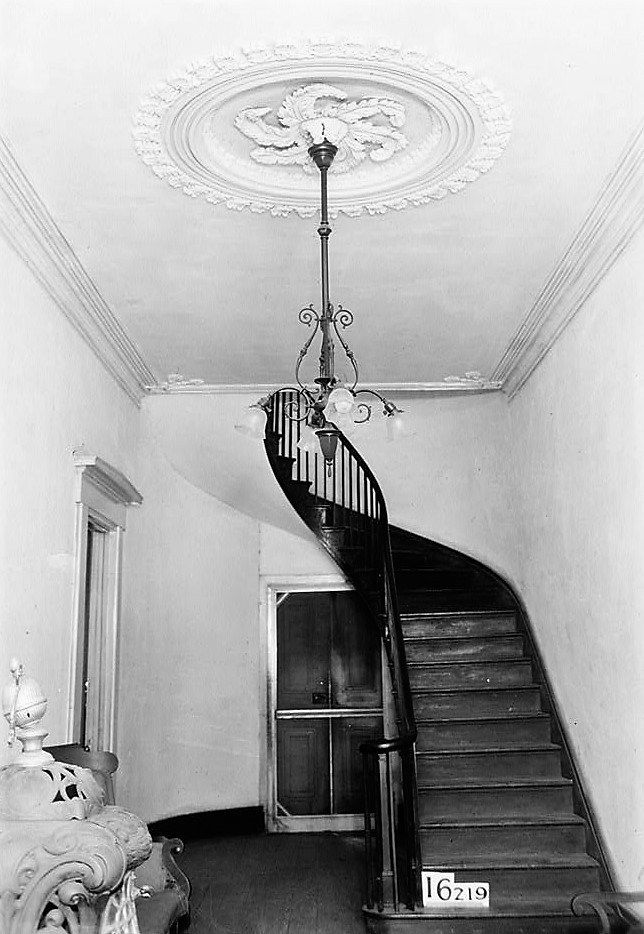 It is people who have built and lived in a home that really makes its interest, the ancestors came from North Carolina. Isaac Croom built the Hobson home. He settled in Green County then, now Hale County, at the county seat and selected one of the prettiest sites in that section. After Isaac Croom had finished his house he found that a large oak tree that grew at the end of the street kept people from seeing his pretty new house so good, so he asked the permission of the town to cut this tree but there was a good well under the tree and the town objected to having the tree cut. One night when the people of the town went to sleep the tree was standing and when they awoke the next morning the tree was gone. 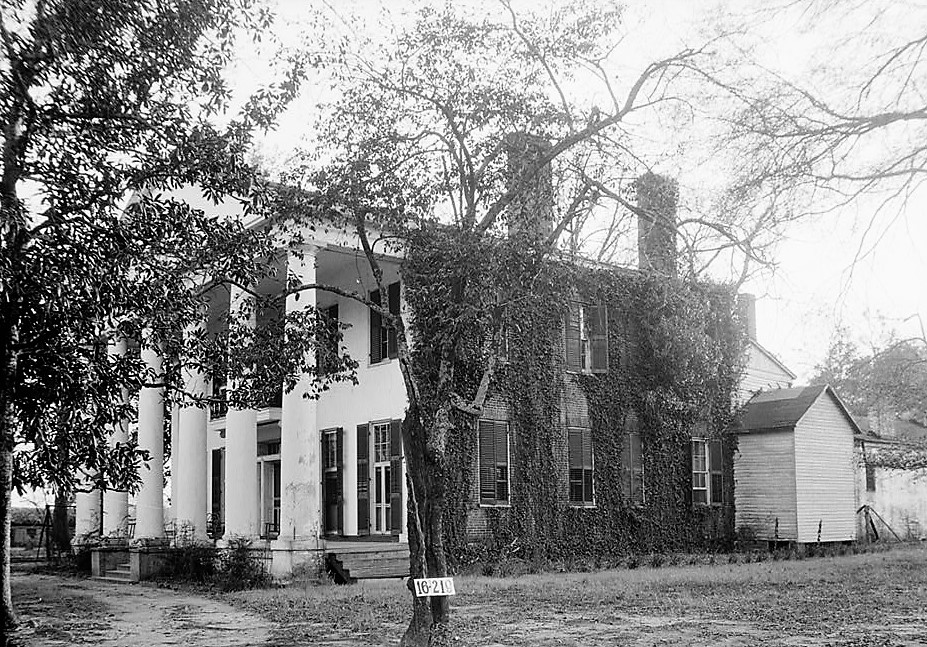 Croom had no children

The Crooms had no children so the home passed into the possession of Sarah Croom Pearson, afterward Mrs. James H. Hobson mother of Captain Hobson. 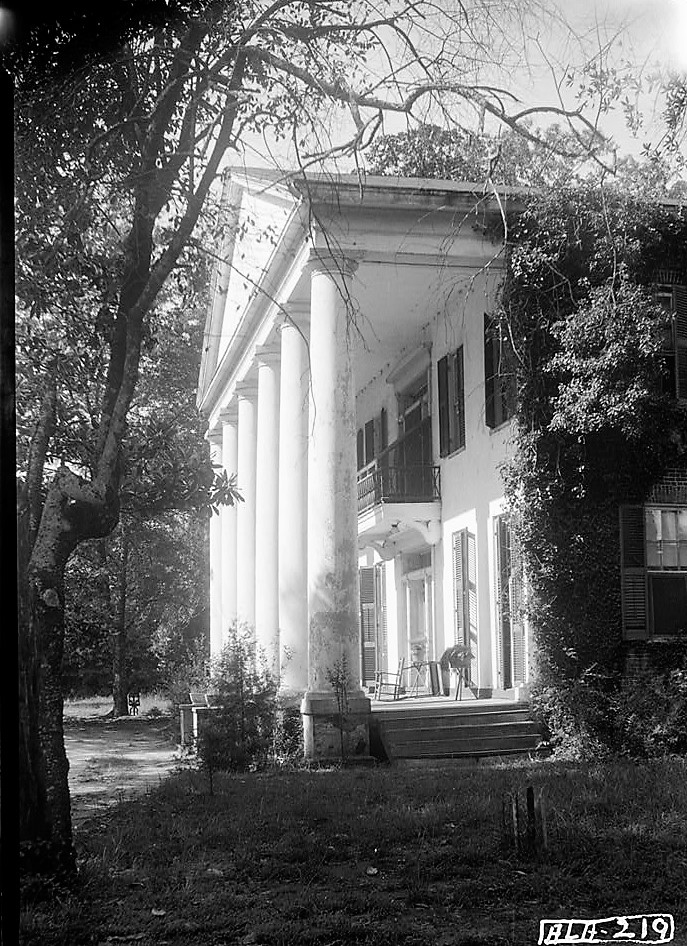 Known as belles and beauties

This old home was always the center of much gaiety and entertainment, especially when the beautiful Pearson sisters from North Carolina came to visit their aunt, Mrs. Croom, Sally Pearson, the mother of Admiral Richmond Pearson Hobson, and her sister, Laura, were noted belles and beauties. 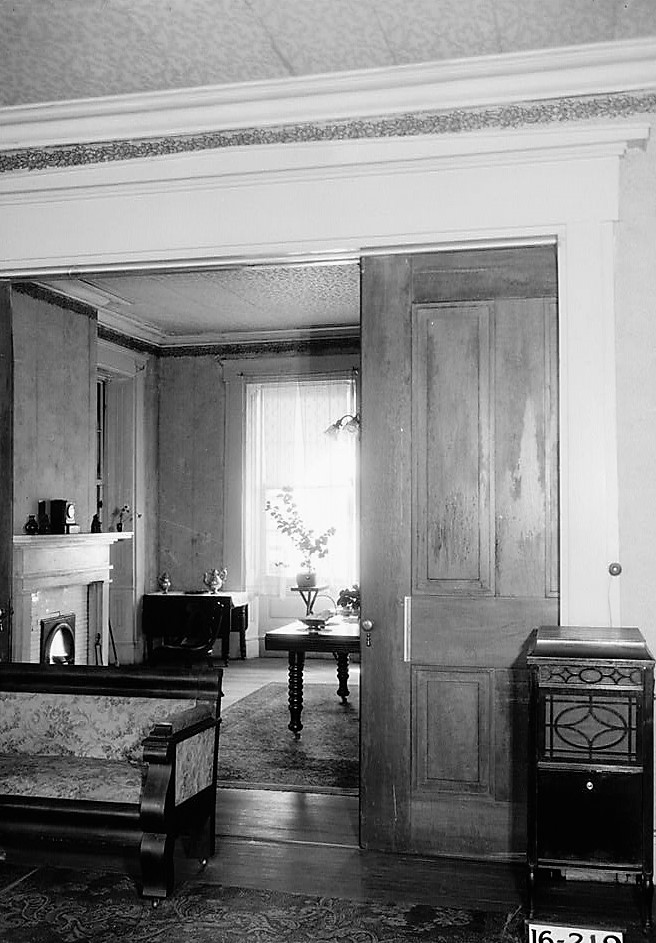 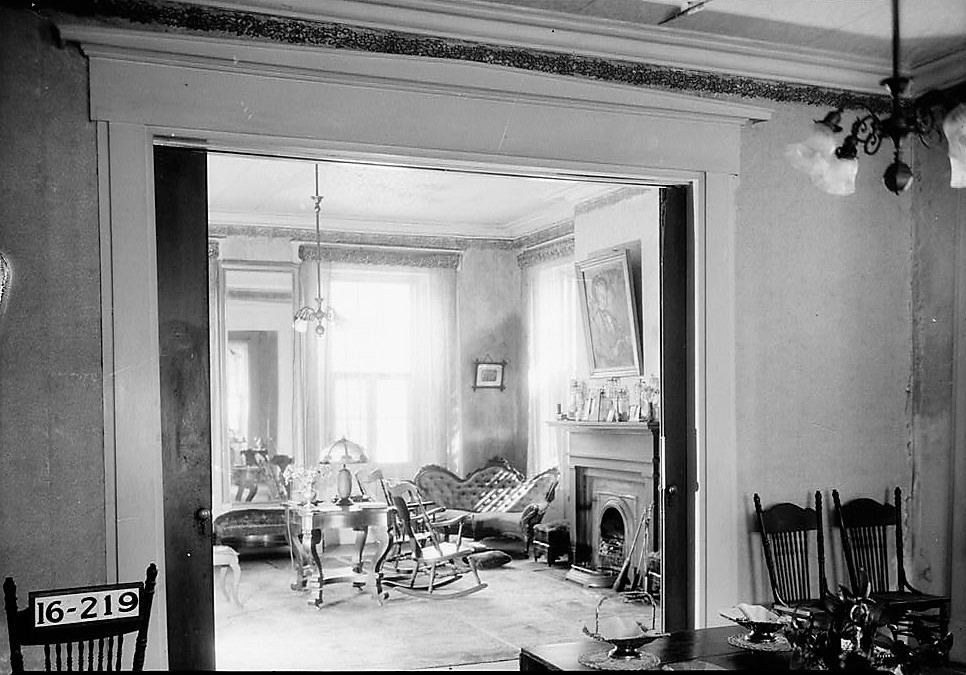 Portraits in the home

In the home are portraits of Colonel Isaac Croom and his wife; Judge Richmond M. Pearson; Eliza Mumford, mother of Judge Pearson; Judge James M. Hobson, his mother, Ann Morehead and others.

Naturally, Richmond Pearson Hobson is there in his Naval uniform. He entered the Naval Academy at Annapolis at the age of fourteen. 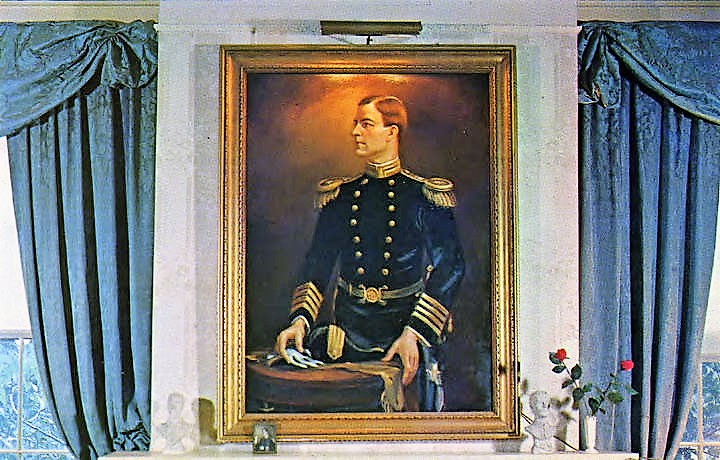 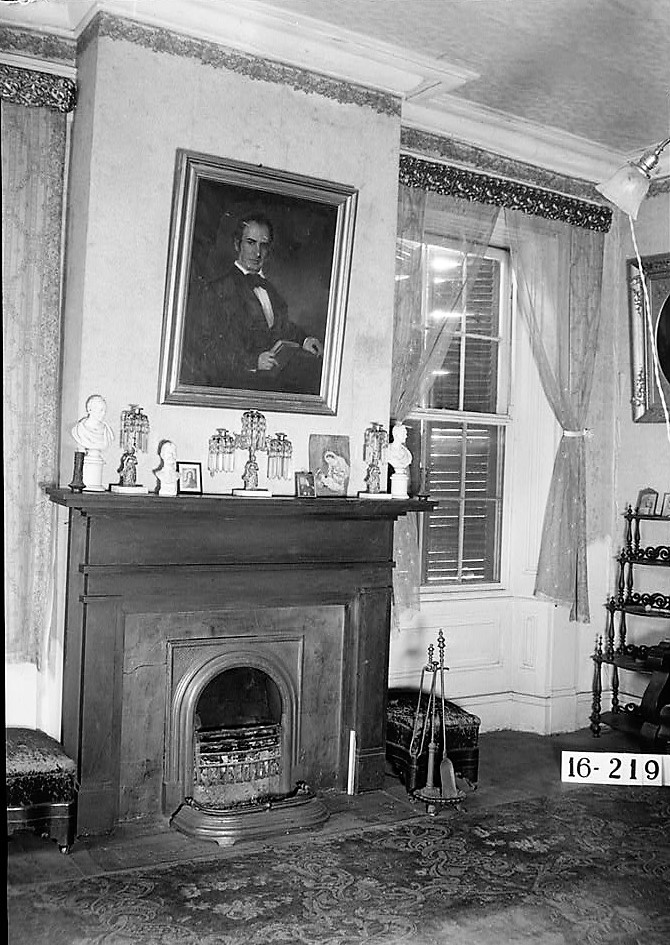 Although the Admiral’s work carried him to all parts of the world, he tried to make an annual visit if possible, to his old home at “Magnolia Grove” where there was always entertainment given in his honor. He loved outdoor sports and hunting, swimming and riding. The house is filled with curios brought by Admiral Hobson from many different lands. Among them is a pine of the tree under which there was an exchange of prisoners made when Admiral Hobson was made free after being captured when he sunk the Merrimac. Also, there is a chair which was once aboard the Merrimac. 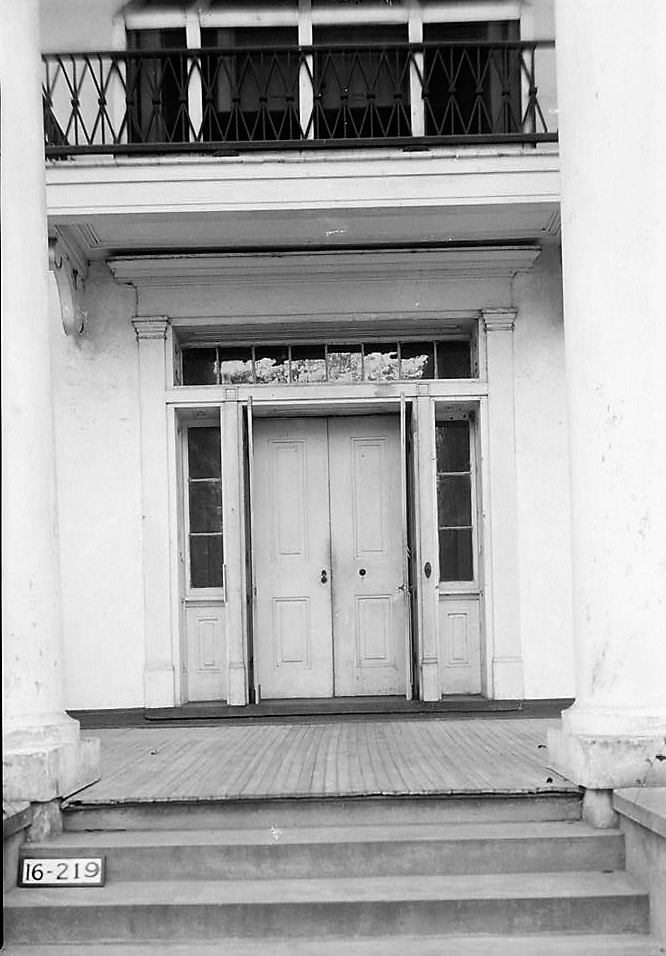 It is gratifying to the friends of the Hobson family that belated official recognition from Congress came to Richmond Pearson Hobson in 1933 for the daring feat performed in June 1898, during the Spanish-American War, which has been pronounced one of the most brilliant deeds of heroism in the entire military history of the nation. This was because of a defect in the law. This law restricted award of the Congressional medal to enlisted men, was later amended to include commissioned officers, and Congressman Oliver, of Alabama, introduced a bill to correct the long and officially honor the hero by presenting to him the medal.

These were the words of “Uncle Ben” “Shucks, you ain’t tellin’ me nothin’, man. I knowed as how Rich was gwine ter be a big man. Didn’t I see dat boy a sailin’ all sorts uv little boats on dat pond out dare. He didn’t take no foolishness neither. A boy playin’ wid him tried to ruinate one uv dem ships one day, and de way Marse Rich thrashed dat boy wuz a sight.” 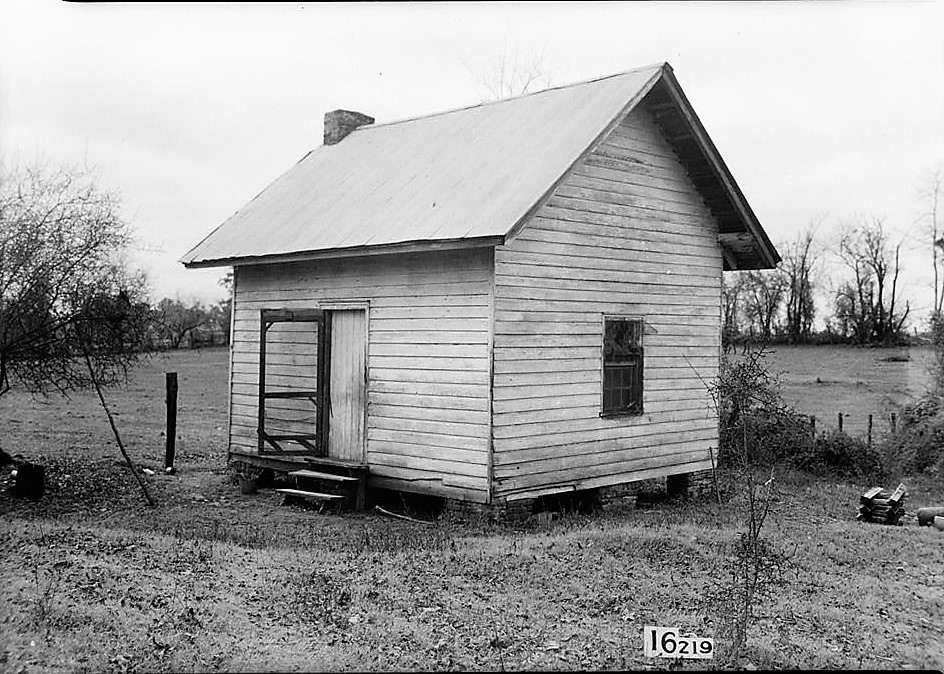 “Uncle Ben” the old family servant of the Hobson family, said this when he was told that the whole world was talking about what a hero Capt. Richmond P. Hobson of Alabama, had proved himself to be. “Uncle Ben” was just as glad as anyone else for he had been with the Hobson family all of his life, and he felt as though “Rich” as he called Richmond, belonged to him.

At the present time (1940s) visitors are welcomed at the Hobson home without any cost. There are two sisters and two brothers of the late Rear Admiral Richmond P. Hobson living in the home.

Information on “Magnolia Grove” and Richmond Pearson Hobson came partly from “Historic Homes of Alabama and their Traditions” and mostly from Miss Margaret Hobson, (youngest) sister of the late Richmond P. Hobson. 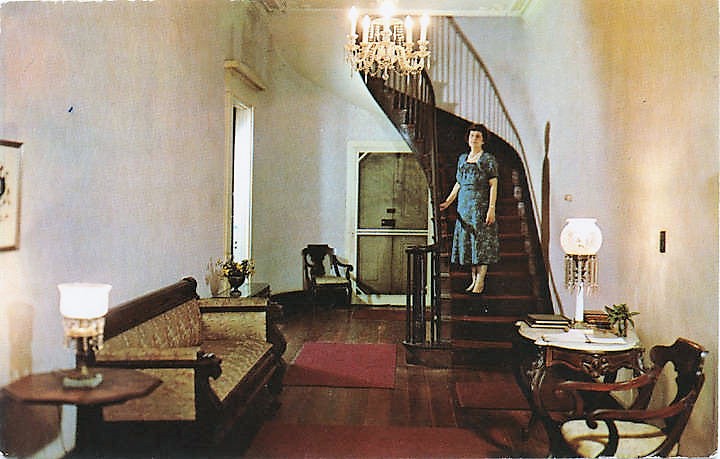 Hallway and stairs of Magnolia Grove in 1950s postcard – Margaret Hobson, the youngest sister of Richmond Hobson stands on the stairs (Alabama Department of Archives and History)

Isaac Croom died in 1863, (of pneumonia) with Sarah following him in 1878. They left no living children, so the estate passed to Sarah C. Pearson, the daughter of Richmond Mumford Pearson. Sarah Pearson married to James M. Hobson, also of North Carolina. James Hobson would eventually serve as probate judge of Hale County for over twenty years. The Hobson family moved to Greensboro and raised four sons and three daughters at Magnolia Grove.

The Hobson’s most famous offspring was Richmond Pearson Hobson, a naval hero of the Spanish–American War who would later serve as a U.S. Representative from Alabama.He was awarded the Medal of Honor in 1933 for his actions aboard the USS Merrimac during the Spanish-American War and in 1934, by special act of the United States Congress, he was advanced to Naval Constructor with a rank of Rear Admiral.

On January 22, 1942, the Gleaves-class destroyer, USS Hobson, was commissioned in his honor posthumously. Magnolia Grove was dedicated as a state shrine in his honor on May 1, 1947

ADDITIONAL INFORMATION FROM ENCYCLOPEDIA OF ALABAMA

According to family records, John Drish, a physician, architect, and early founder of Tuscaloosa, was the designer and oversaw construction. Some of the design features are similar to the work of architect William Nichols, who was active in Tuscaloosa in the 1820s and early 1830s. Indeed, Nichols’s son married one of Sarah Croom’s nieces. 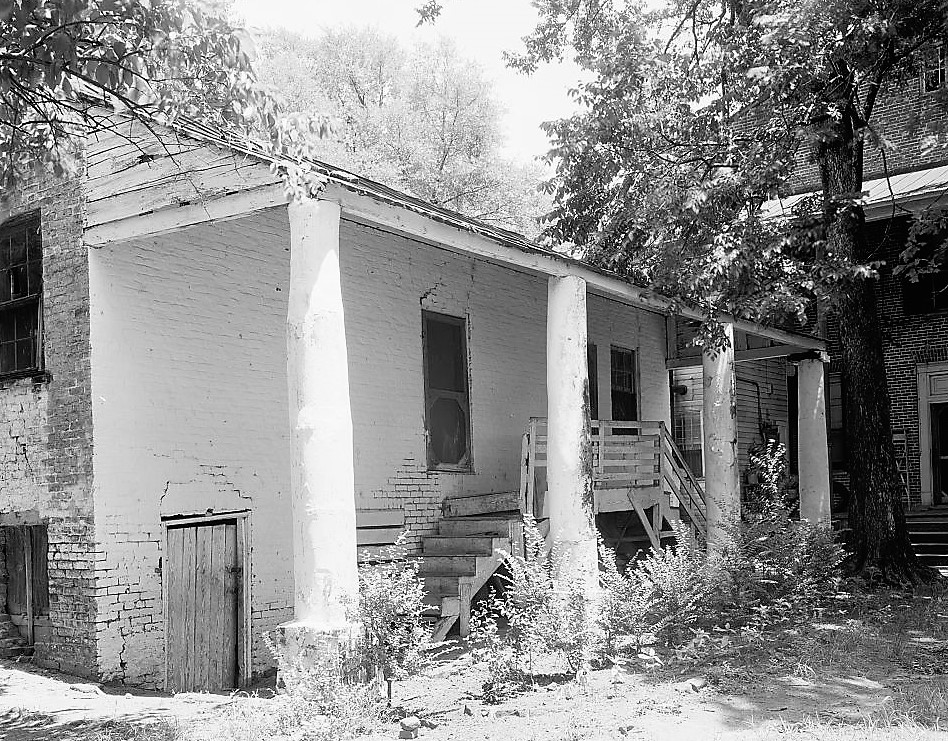 The site retains much of its original context, sitting on 15 acres. In addition to the main house, the original kitchen, a detached two-story structure, still stands behind the main house. The basement level consists of a root cellar, wine cellar, and what was possibly a laundry. The upper level has two rooms; the cooking area and cook’s living quarters. Another outbuilding, a one-room frame structure located at the south end of the rear porch of the main house, is believed to have been the original plantation office, but it was repurposed in the 1870s to serve as the kitchen. A one-room frame slave cabin stands at the southwest corner of the property. There was one other slave house that was demolished prior to the 1930s, as were a barn, bath house, and privy. A small four-column brick structure described in the HABS as “slave quarters” was in fact the original kitchen. (see below) As this was a townhouse, the number of slaves living here would have been few, probably no more than 12 and consisted of domestics, gardeners, and a carriage driver, for example. 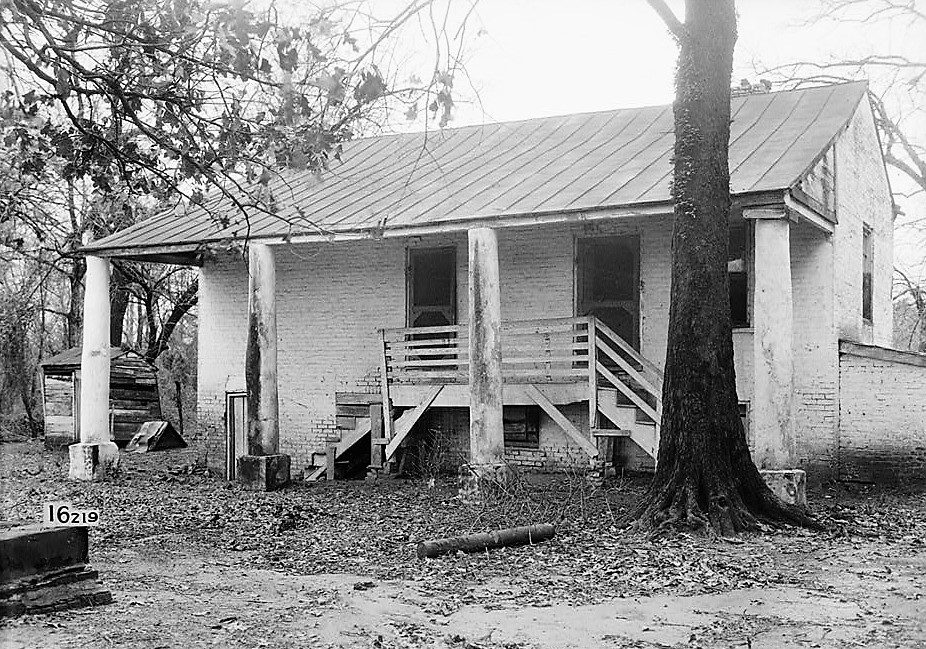 Savings – Just in time for Christmas Gift Giving! Buy one and get one free! Four books from the Alabama Footprints Series have been combined into one book for the price of three books.