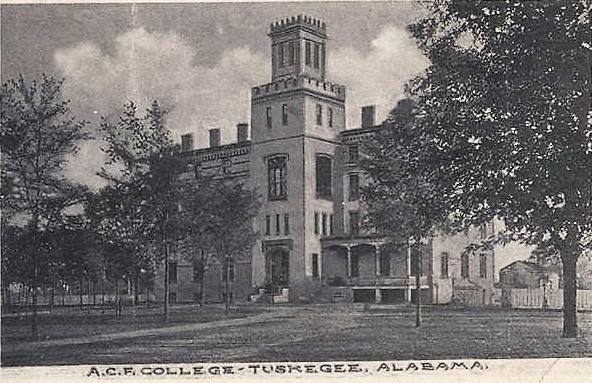 Published in The Alabama Historical Quarterly, 1956

In the Fall of 1849, John Crenshaw Burruss, a young man from Caroline County, Virginia, arrived at the town of Notasulga, Alabama. He was twenty-eight years of age and had been ordained as a Universalist Minister in Richmond, Virginia, in 1844. His father, George Burruss, a teacher and a farmer, had died several years prior to his moving to Alabama. He was a descendant of the Burruss, Turner and Noll families of Virginia and Maryland.

During the same year that Reverend Burruss settled in Notasulga, the name of the town was changed from Moore’s Cross Roads. Amos Moore had been Postmaster in 1845. H. H. Armstrong was Postmaster in 1849. Other early Postmasters were W. A. Shaw, 1855, and J. J. Dickson, 1875.1

Macon County was organized in 1832, and Tuskegee, the County seat, was laid out in 1833. Numbers of settlers moved into east Alabama from Virginia, North Carolina, South Carolina, Tennessee and Kentucky. This was especially true after the removal of the Indians in 1836.2

During the 1840s and 1850’s, there was a rapid growth of population in Alabama. People were in the process of building small towns and cities. New fields were opened, agriculture was the chief industry, and cotton was king.

Early settlers told of an Inn located on a knoll near the present location of the Notasulga Methodist Church. Possibly Reverend Burruss stayed at this Inn until he could find a place to live.

Reverend Burruss was married on April 7, 1853, to Frances Ann Tinsley. Burks3 who lived near Notasulga. Frances Burks Burruss was the daughter of Reverend Charles S. Burks, a Baptist Minister. Her mother was Elizabeth Armstrong Burks, daughter of James Armstrong, a Baptist Minister from Wilkes County, Georgia. The Burks family had moved to Notasulga from Wilkes County, Georgia. H. H. Armstrong, Postmaster, was an uncle of Frances Burks Burruss.

Reverend Burruss purchased a block of land extending north from the present corner of Lyon and Hardwich Streets to “Back Street”, now known as the Tallassee Highway; west to the street which the old settlers called “Shirt Tail Bend” (near the present location of Rea Brothers’ Gin). He bought a house near the middle of the block, facing Hardwich Street. The street now known as West Avenue was not in existence at that time.

Cedar trees were planted to form a circular drive to the house. On the east side of the house stood the printing office and library. The house still stands, but has not been in the family since Reverend Burruss’ death. It is now known as the W. P. Moss home.

Built his own church

John Crenshaw Burruss was vitally interested in his religion. He built his own church on a little knoll surrounded by cedar trees, on his property, not far west of his home. He had studied for the ministry at Richmond, Virginia, and later the Degree of Doctor of Divinity was conferred upon The Reverend Burruss by Buchtel College, Akron, Ohio. He preached in all of the southern states from Maryland to Texas. Several tours were made through Kentucky, Indiana, and Illinois. He retained his home in Notasulga.5

“Journey of the Editor” was a column in The Universalist Herald. Interesting observations were made concerning roads, or lack of them, crops, the condition of the Editor’s horse, Prince; geography of the particular area, farming, politics, stage, train and boat travel; Inns, schools, growth of population and the condition of the churches as well as the members thereof.

Doctor Burruss was interested in education. The following was published in The Universalist Herald, December 18, 1857:

“The subscriber will open an English School in the Universalist Church, in Notasulga, on the Third Monday in January 1858. Terms of tuition per quarter of eleven weeks: Spelling, Reading and Writing—$3.00, Arithmetic, English Grammar and Geography—$4.00; Geometry, Trigonometry and Surveying $5.00. The school will close at the end of the third quarter. His daughter, P. F. Baber, will give, if desirable, lessons in Architectural and Prospective (sic) Drawing and Painting at three dollars for ten lessons, (Signed) Thomas Baber”. 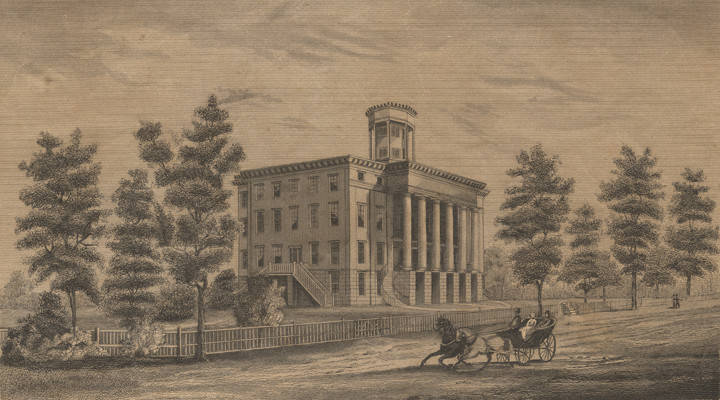 East Alabama Female College in Tuskegee, Alabama, 1852 print from a drawing by Julia Adams (Alabama Department of Archives and History)

Other notices concerning local schools were published in The Universalist Herald. The Notasulga Academy posted notice of its opening in 1856. James B. McMurray was Superintendent in 1859. There is mention of Rocky Creek Academy, four miles from Notasulga, in 1857, In Tuskegee, the Alabama Conference Female College was established with Dr. A. A. Lipscomb as president. Tuskegee also had a military school for boys, as well as the Tuskegee City Schools. The East Alabama Female College was established at Tuskegee but soon closed.

Alabama Conference Female College in Tuskegee moved to Montgomery in 1909 and renamed Alabama Female College. When it became co-educational, it was renamed Huntington College (Alabama Department of Archives and History)

Notasulga District High School and Cross Keys High School were also in Macon County. John F. Yarborough advertised his English Classical Teaching at Loachapoka, then Macon County, in 1856. Professor I. J. Morris advertised his system of English Grammar, at Auburn, Macon County, in 1858. The Masonic Female College was founded in Auburn, Professor Darby was Chemist and Professor Douglas was the first president. The cornerstone for the East Alabama Male College was laid in 1857. Dr. Burruss wrote an account of the event, describing the speeches and the delicious dinner served to the public.

More notices in his newspaper

The following notice appeared in The Universalist Herald in 1856:

“Auburn Water Cure the establishment located in the pleasant and healthy town of Auburn, Macon County, Alabama, being on the Montgomery and West Point Route Railroad, is convenient to access from both east and west. To invalids all the facilities of thorough treatment, together with personal attentions of the physicians. (Singed) Dr. W. M. C. Reed”.

Dr. Burruss sold books pertaining to his religion and also books concerning medicine, agriculture, education, history, labor cooking, and other subjects. These books were on sale at his printing office. He read widely, as is evidenced by the number of books he had in his home library. He was the author of “Letters to Reverend Lovick Pierce, D.D., of the Georgia Methodist Episcopal Church”, in 1853, “Discussion of Endless Punishment With Reverend William Hicks of the North Carolina Conferences” 1859 and “Discussion of Endless Punishment with Reverend J. R. Graves, Baptist, of Memphis, Tennessee”, 1878- 1879. Public debates were common during those years, and Dr. Burruss printed his debates in The Universalist Herald.

Dr. Burruss remained in active service for more than sixty years. He was a Democrat and a Mason, being Chaplain of the Notasulga Lodge for many years. He was tall of stature fond of wearing a tall beaver hat and a frock tail coat; quick-witted and humorous. His life spanned an interesting and exciting era. To him, life was a challenge and he accepted it in high spirits He died in Notasulga on Dec. 12, 1910, just a few months before his ninetieth birthday. His, was a long and fruitful life.