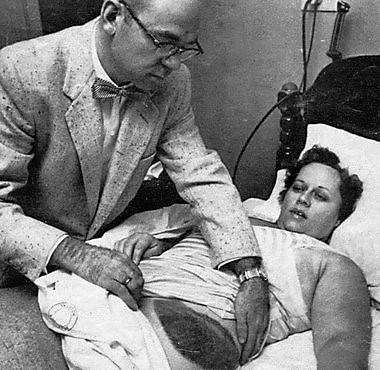 On November 30, 1954, a historic event occurred in Alabama when a meteor appeared in the Alabama sky in the morning and was seen by a Montgomery meteorologist and a radio announcer as it trailed across the pre-dawn hours with an eerie green glow.

The meteor exploded and at 2:56 p.m., a chunk went through the roof of the Hodges home and injured Elizabeth Ann Hodges as it smashed a hole in the roof above her living room, hit her radio and them bounced off her hip. Mrs. Hodges was reported to have been not feeling well and was lying on a couch in her living room when the meteor smashed through the roof and tumbled through the ceiling. She received a major grapefruit size bruise when the meteor struck her hip according to a hospital in Sylacauga but that was not the only suffering Mrs. Hodges endured from the event.

Taken to Maxwell Air Force Base

So many people flocked to the Hodges house that when her husband, Eugene Hodges, returned home from work he had difficulty getting in his own home.

The meteorite was taken to Maxwell Air Force Base in Montgomery where it was tested and identified. It measured about six inches in diameter and weighed approximately nine pounds. The inside consisted of a metallic, gray granular substance which responded to tests given for sulfide and the outside coating was a black satin appearing substance.

The next day, Mr. Hodges complained that the Air Force had no right to take the meteorite and it should be returned to him. His neighbors agreed with him. The Air Force reported that the stone would be shipped to Wright-Patterson Air Force Base, Dayton, Ohio, for inspection and afterward returned to Mrs. Hodges.

Meteor seen across many states

The exploding meteor was reported to have been seen over the states of Alabama, Georgia, and Mississippi. Six Tuscaloosa, Alabama citizens also stated they got a good look at the meteor as it fell. The accounts below were recorded in The Tuscaloosa News, December 1, 1954.

Another piece discovered in a field

According to the Avondale Sun of 1954 (October-December), James (Julius Kempis) McKinney found a missing mass of the meteorite that hit Mrs. Hodges of Sylacauga in a field on December 1st. He took his find to George Swindel, U. S. Geologist at Sylacauga who verified his find.

Previously, there had been 60 recorded ‘close calls’ of a meteorite falling close to people and in the 1860s, and a few instances of death to animals hit by meteorites but there was no other authenticated case before 1954 of a human actually being struck by a meteorite.

Mrs. Hodges was later featured in Life Magazine as being the first person ever reported being struck by a meteor. She reported that she had been napping on her couch, covered by quilts when the incident occurred.

The Hodges never fully recovered from the event and all the excitement it generated. The couple divorced in 1964. Ann Elizabeth Hodges died of kidney failure in 1972 at a Sylacauga nursing home at the age of fifty-two. The Hodges eventually donated the stone to the natural history museum in 1956.

Years later, their house caught fire and was later demolished. Today, a historical marker stands in Oak Grove near the spot of their house on the Old Birmingham Highway. (Turn east off US Hwy 231 at the Shell Station onto Highway 511. The historical marker is on the right,three-quarters of a mile)