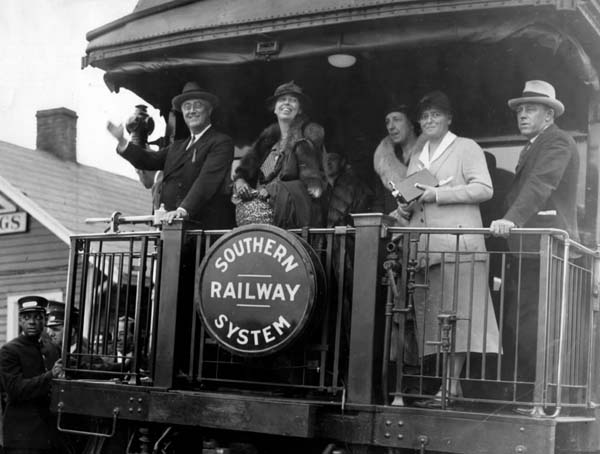 Harold and Helen Fisher of Hoover are friends of mine. Harold found a clipping from the Birmingham News printed in 1933 that his father, Harold I. Fisher wrote when he was an editor at the Birmingham News. I read and found very interesting. Below is a copy of the clipping.

By Harold I. Fisher

To the blaring notes of “Happy Days Are Here Again” Franklin D. Roosevelt, next president of the United states was welcomed to Birmingham by a cheering throng of 30,000 receiving a large gift of flowers and an iron medallion of himself, spoke briefly of his pleasure at being in Alabama and departed waving his hand, his face wreathed in his pleasant smile while the band again struck up his campaign song and the crowd shouted.

The wild acclaim of the massed thousands below the elevated tracks rung out at the instant the president- elect stepped to the rear platform of the train reechoed when he expressed the determination to put the Muscle Shoals plants at work and again sounded when he expressed the hope the the song, “Happy Days Are Here Again” will come true.

The rear platform of the special train abreast of the battery of loud speakers with Senators Black and Bankhead, Congressman Hill and other dignitaries grouped about the rail. As the car stopped rolling, the president-elect appeared on the platform to be greeted by an outburst of applause. Waving his hand for a moment, Mr. Roosevelt then turned to the door of the car and drew out his daughter, Mrs. Curtis Dall.

She smiled at the crowd and at the insistence of her father waved her hand.

“My friends, I am extremely glad to be welcomed to your great city. I had a wonderful day in the Northern Alabama seeing that great plant built by the United States government but which is now idle.”

“I want to place that great plant at work again.”

“You know I feel that you people of Alabama are neighbors of mine. From the top of the mountain behind my home at Warm Springs, Ga., I can look over into Alabama.”

“I hope I can come back to Birmingham some day for a longer visit with you. It is a great welcome you have given me.”

“May I express the hope that the song your band has just played, ‘Happy Days Are Here Again,’ will come true.”

Mr. Roosevelt stepped back from the microphone and started chatting with Mr. Fitts about several mutual friends in the North. Meanwhile Sam F. Clabaugh, president of the Chamber of Commerce mounted the platform and presented the president-elect with a bronze medallion the likeness of the great New Yorker, as the gift from the Birmingham Chamber of Commerce. Mr. Roosevelt thanked him for the gift and resumed talking with others on the platform.

Much of the credit for the smoothness of the Roosevelt appearance in Birmingham Saturday is due to the efficient arrangements worked out by Congressman Lister Hill, of Montgomery. Mr. Hill was personally on the job during the pause of the presidential party at the L. and N. Station, and it was directly a result of his insistence that train was shifted to a position where the throngs could greet the next president.

In addition he mapped out arrangements in advance for other details in the Roosevelt visit in Alabama working in close cooperation with all arrangement committees.

George McLaurine, crippled boy ,of 1500 South Thirteenth Place was brought to the rear of the train and presented a letter he recently received from Mr. Roosevelt asking to meet him on his visit here.

Mr. Fitts reached down over the railing and took the letter calling attention of the president-elect to the boy. Mr. Roosevelt spoke warmly to young McLaurine, inviting him to visit Warm Springs and expressing his hope he would recover from his affliction.

A few more moments of chatting with friends on the platform and the train slowly began moving away. A cheer broke out from the crowd and Mr. Roosevelt again exhibited his wide smile, waved his hand cordially and ended his visit to the tune to which it was started, “Happy Days Are Here Again.” 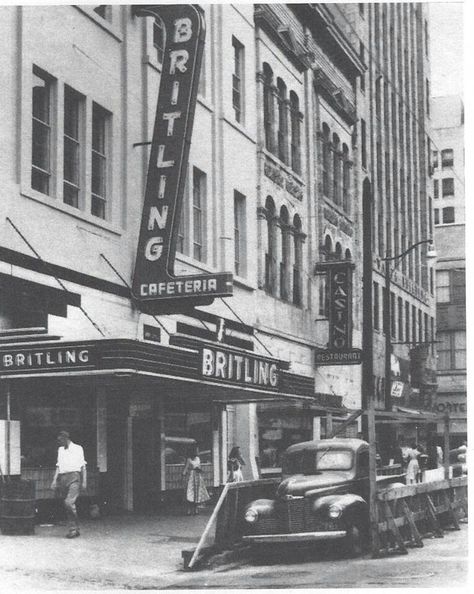 At the bottom of the clipping there was an ad from The Britling Cafeteria which advertised: