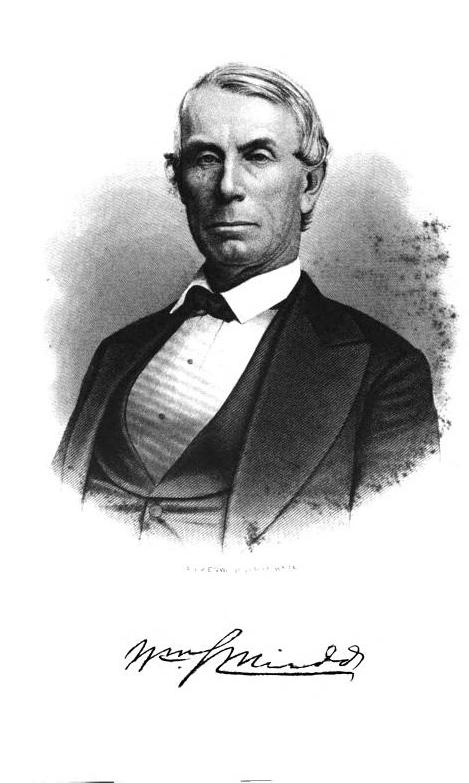 William Swearingen Mudd was a lawyer, legislator, and circuit judge He was born December 2, 1816, near Louisville, Jefferson County, Kentucky, the son of James and Sarah (Swearingen) Mudd, of Kentucky. He is the grandson of Abijah and Susan Swearingen, both of Kentucky.

The founder of the Mudd family in America came from England with Lord Baltimore, three brothers coming over as colonists, one going later to Kentucky, one to Missouri, while the third remained in Maryland.

Judge Mudd received a sound preparatory education in the schools of his native state, and later entered St. Joseph’s college, Bardstown, Kentucky, a famous institution of the period conducted by Roman Catholics.

He moved to Madison County with his parents, in 1817, and later to Lawrence County. In 1831 he located in Jefferson County,where he read law under Walker K. Baylor. His plantation, Arlington, was located east of Elyton. Being admitted to the bar in 1839, he practiced his profession in Jefferson and surrounding counties. He was elected to the Alabama legislature for the sessions of 1843 and 1848, inclusive and he was elected solicitor of the judicial circuit embracing his county with others. In 1856, he was elected judge of the circuit, an office he held consecutively until 1883 when forced to retire because of failing health.

Judge Mudd was a successful business man and one of the men who founded and developed the foundations of Birmingham. He operated the Oxmoor furnace in the early 1870s and his success in that undertaking gave renewed confidence to the coal and iron interests which at that time were at low ebb.

He was a charter member and director of the Elyton Land company until his death. In association with Josiah Morris, the Montgomery banker, and T. L. Hudgins, of Birmingham, he founded the Citizens’ bank, which afterward consolidated with the First national bank. Judge Mudd built the first hotel in Birmingham, which was later replaced on the same site by the Florence hotel, which in turn gave place to a modern mercantile establishment.

Prior to the War of Secession, Judge Mudd was a Whig but afterward became a Democrat. He opposed secession and was a union man until hostilities began, after which he devoted his influence and means to the Southern cause.

His ancestry was Roman Catholic in faith, but a short time before his death he united with the Episcopal church. He was a Mason.

Judge Mudd married on December 22, 1841, in Elyton, Florence Jane, daughter of Dr. Samuel Sidney and Harriet Hampton (Wright) Earle of that place, natives of Pendleton District, S. C., who moved to Alabama in 1820. The former was a noted physician of the period and a descendant of John Earle, a Revolutionary soldier and progenitor of all the Earles in Alabama. The family was of English origin, and migrated to Virginia in 1652, three brothers, Baylis, John, and Elias, going later from Virginia to South Carolina, and their descendants settling in Georgia, Alabama and Mississippi.

The only survivors of this large family in 1920, were Mrs. Jordan and Mrs. Carter.

is filled with Hints and Tips to begin your family genealogy research and acquire Genealogy information. In this book, you will find, many on-line resources, how to do court house research, where to find birth, death, social security records free on-line, and 81 questions to ask when interviewing elderly relatives. The Tips on How to break down the proverbial ‘Brick Wall’ and Free ON-LINE resources will help even the experienced genealogists