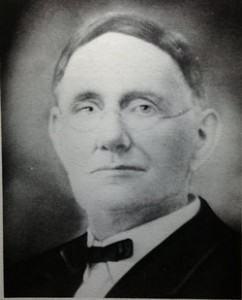 William Yancey Adams, a teacher, was born at Gum Springs, Blount County the son of Barclay M. Adams and Martha (Musgrove) Adam onFeb. 4, 1848. His father, born in Edgefield, S. C, came to Blount County, in 1846 and served in 1st Alabama infantry regiment, C. S. Army. William was the grandson of Jack Adams and Elizabeth (Nicholson) Adams, of Edgefield, S. C, and of William Henry Musgrove and Sallie (Fowler) Musgrove, the former a native of Georgia who served several times in that state’s legislature. She was the daughter of Rev. John Fowler and a cousin of William L. Yancey.

His father was a captain in Co. C, 29th Alabama infantry regiment, C. S. Army, and a Baptist minister. He died at Mobile, Alabama about 1862.

William Y. Adams was the great-grandson of Rev. John Fowler, a cousin of William Lowndes Yancey.

Mr. Adams was educated in the common schools of Blount County at Blountsville high school, Ruhama high school, East Lake; and graduated A. B. Howard college. He taught schools at Hanceville, Walnut Grove college, Blountsville, and rural schools, beginning in 1866-67 and covering a period of fifty-two successive years. Afterwards, he served two years as superintendent of education of Blount County. He represented Blount County in the legislature in 1919. He was a Democrat; a Baptist; Mason; and Odd Fellow.

by first wife were;