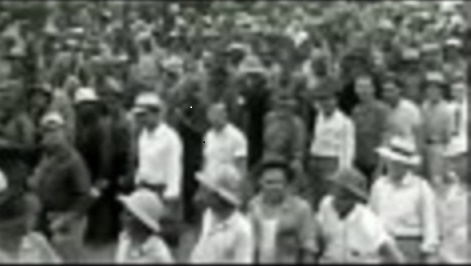 During WWII, several Alabama small towns manufactured high explosives for the War. Here is a news article from June, 1941 that reveals where the plants were.

Birmingham, Ala., June 19 – (AP) – Manufacture of high explosives at the Childersburg, Ala., ordnance plant, announced officially by the War Department after weeks of unconfirmed rumors, will bring total plant expenditures in North Alabama for defense purposes beyond the #200,000,000 mark.

Construction at Childersburg is still in preliminary stages, although rapid progress has been made since work began there late in April.

Steel production in Birmingham and Gadsden

Manufacture of high explosives there will round out North Alabama’s ordnance production to include all of the major essentials for shells. Steel is produced in Birmingham and Gadsden, and shells are forced and machined in a new ordnance plant at Gadsden and at several Birmingham plants converted from civilian uses.

A bag-loading plant at Talladega, costing approximately $13,000,000 will handle most of the Childersburg powder output. At Sheffield, an ammonium nitrate plant is being built at a cost of more than $6,500,000, and an ammunition storage depot is under construction at Anniston, estimates to cost $12,800,000.

Other defense plant construction includes a $35,000,000 aluminum plant at Listerhill, near Muscle Shoals, and a $35,000,000 expansion of the iron and steel industry in the Birmingham district.

Other plants made machinery

Numerous smaller plants have installed new machinery and some have built annexes to handle munitions orders.

Announcement of the Childersburg high, explosives plant brought renewe speculation on the possibility of construction of a shell loading plant within the North Alabama “ordnanc triangle” formed by Birmingham, Gadsden and Childersburg. Usually well-informed sources said a site between Birmingham and Gadsden has been under consideration. Shell loading plants cost up to $35,000,000.

Well-informed sources said the high explosives manufacturing operations at Childersburg would add approximately 600 employees to each work shift. The powder plant is expected to employ approximately 8,000 on a three-shift basis.

Start researching your family genealogy research in minutes. This inexpensive Ebook has simple instructions on how to get started with FREE sources. Download the Kindle version of  WHERE DO I START? Hints and Tips for Beginning Genealogists with On-line resources to your computer immediately with the FREE APP below and begin your research today!