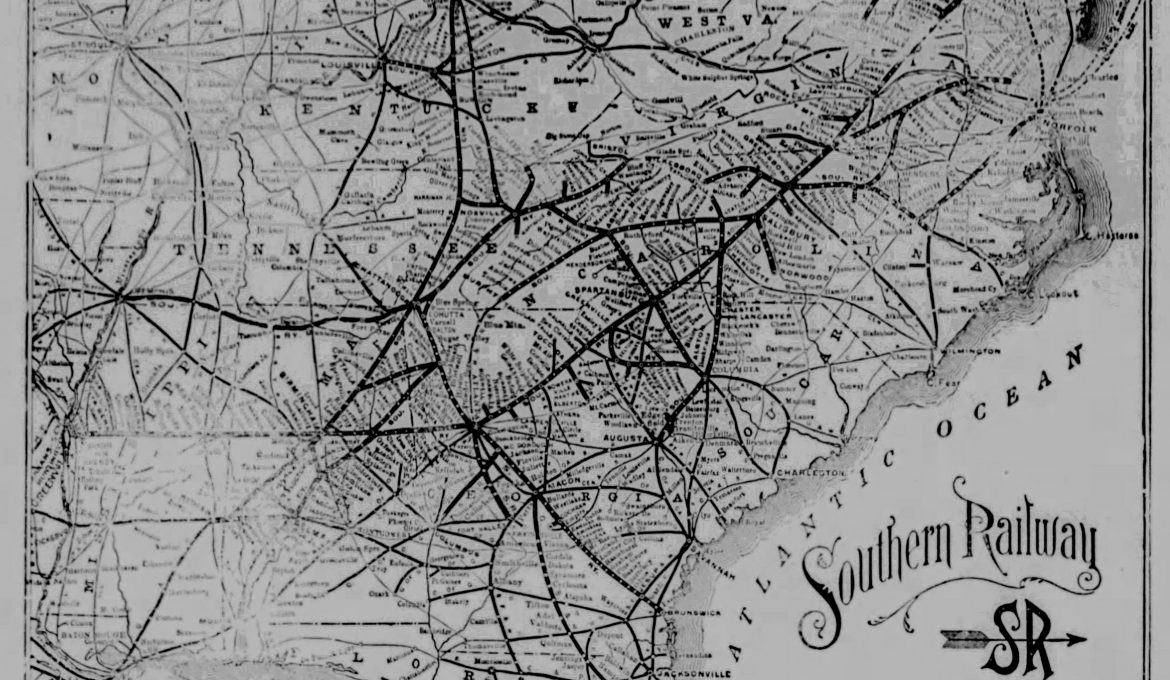 REACH EVERY PRINCIPAL CITY AND PORT

In the South —The Fastest Passenger and Freight Schedules — The Road Bending Every Energy Toward Developing Resources of the Country Lying Adjacent to Its Rights of Way.

If a place or section is shown in periods of depression to have such advantages for manufacturing in any line that its establishment are able to make money while factories of the same kind in older manufacturing communities are not able to operate at a profit it follows that when there is a general revival of industrial enterprise and renewed investment in manufacturing establishments such a place or section must still be a better location for new plants and must command the support of the far-sighted investor.

The South showed during the hard times that it had pre-eminent advantages for a great many lines of manufacturing over other sections of the United States by keeping up to a large degree a steady industrial development, in spite of low cotton and a scarcity of money, and now, in a revival of industrial enterprises, its development cannot but be proportionately greater than during the past few years. The things necessary to make sure of this increased development is for steady and intelligent work to make known the advantages of the different localities of the South for various lines of industries, ready and active co-operation of local enterprises and capital with outside capital, and a spirit of encouragement on the part of the people with all industrial establishments which go to build up the community and to advance its interests.

The great railroad systems of the country are intimately associated with the industrial development of all points on their lines. The Southern railway system is most intimately concerned in the development of the territory through which its lines run. It has paid special attention to the building up of the cities and towns it reaches and the development of the agricultural regions it penetrates. Including the Alabama Great Southern road, it is the great industrial line of the South. It reaches from the important gateways of domestic and foreign travel and traffic to the principal industrial and commercial centers, to the fine fruit raising, stock raising, grain, cotton, tobacco and truck growing sections of Dixie Land. It can be said to be the industrial line of the South, as by far the greater portion of the important industrial enterprises are located on its lines. The cotton industry is but a fair sample of the importance of and development of manufactures along its lines. In 1890 there were in the eight Southern States in which the Southern railway has lines, in round number 1,500,000 spindles. In 1894, the date of the organization of the present Southern Railway Company, there were 2,300,000 spindles, of which 1,400,000 were on its lines. On the first of last January there were about 4,000,000 spindles in the same States of which 2,500,000 were on the Southern Railway, showing that the great growth of the industry in the South has been along the lines of this system. This is so far the two reasons that the territory which the road reaches has so many natural and other advantages for textile manufacturing, and that the company’s policy has been such that it has worked constantly to develop this and other industries in the communities it serves.

HOW THE SOUTHERN HELPS

The Southern Railway Company festers industries along its lines in two ways. It furnishes the best and cheapest means of reaching markets or supply points and the best facilities possible for the prompt handling of traffic at initiatory and terminal points. It also, through its industrial department, carefully studies the conditions of industry in the South and in the country generally, the advantages of the particular communities along its lines, keeping in touch with the commercial bodies and with the people of such communities; constantly works to bring to the attention of manufacturers and investors and of homeseekers the opportunities and advantages its territory possesses, and in all possible ways aids in the establishment of new factories and in the settlement on new colonies. In the last fiscal year of the Southern Railway more than 1,200 families from the North were settled along the line of the road; over 100,000 acres of land were sold to these settlers, while there was invested in manufacturing enterprises and in the enlargement of old plants several million dollars. These settlers and the new industries were pretty generally distributed along the road in the different States of the South.

The vast forests of hard wood in the South along the Southern Railway should bring to its territory large numbers of woodworking plants which are now making many Northern communities prosperous, simply because they will find nearly all conditions more favorable for them in this section. The head of a furniture plant of large size in New York recently said to a representative of the Land and Industrial Department of the Southern Railway that his company bought most of its supply of lumber in the South, and at that time it had a car on the way from Alabama on which the freight would be $150. It is good to find a market for Alabama lumber in the North or elsewhere, but it would be better – and it will come – that the lumber be made into chairs and desks and such things in Alabama, and the finished product shipped to the other sections of the country and to the foreign markets.

The South is the best section of this country for the raising of fruits and vegetables, and the canning industry is to be one of its most profitable industries – one that will support a large population. There has been a good deal of interest taken in the establishment of canneries in Alabama of late. Another industry which will doubtless become an important one in this section of the country is the production of leather and the accompanying shoe factories. There are many other lines of manufacture which might be mentioned now assuming importance in the South, and for which there are special advantages. There are excellent glass-making sands in Alabama and other States, and one of the newest industries on the line of Southern Railway is a glass factory at Tallapoosa, Ga. Pottery plants will so furnish an attractive investment for capital.

The mining industry is one of the chief ones of the South, on the Southern Railway, and one which gives it an immense advantage for manufacturing and commercial supremacy. Alabama is the leading mineral state of the South. The development of the coal and iron mines, of the quarries of marble and granite, of kaolin, buxite and other deposits, of gold mines, etc. has been important in the past and will continue to be so in the future. —- development of the great coal interest of Alabama and Southern railway has played an important part. The barge line established by the road on the Mississippi for handling Alabama coal has been a success, and will have much effect in building up that new outlet for the mines of this State.

The settlement of the South by farmers of the north to take up much of the land that is now fully utilized is of the utmost importance, and is hardly second to the building up of great industrial centers and the work of bringing the advantages of the south for homes in other sections seeking new locations is one to be vigorously prosecuted. Alabama, in common with other Southern States, presents superior advantages for the home-seeker, and this is a fact that is becoming known, and the result is a good immigration of a splendid class of farmers.

There is to be a large development in the near future in the industries of the South, and Alabama will, from the many advantages she possesses in her iron and coal mines, her quarries, her clay and other deposits, her timber, her fine water powers, her cheap and intelligent labor, her local and State encouragement of manufactures, and from her fine transportation facilities, benefit most largely from that development. Her fertile valleys and her congenial and healthy climate will contribute much to that growth. No portions of the state possess more advantages for agricultural or commercial or industrial growth than those reached by the Southern railway system. Entering the state from Tennessee, from Georgia and Mississippi, with lines from Chattanooga Birmingham and on down to Meridian, Miss., passing through such places as Fort Payne, Attalla, Tuskaloosa, Akron; the Memphis division passing through the northern tier of counties, and such places as Stevenson, the Decaturs, Huntsville, Florence, Sheffield and Tuscumbia, with the great east and west route through the state, passing through Birmingham, and giving an outlet to the Mississippi river and to the coast and the north via such places as Anniston, Leeds, Cordova and Fayette; with the line from Atlanta Junction to Meridian, by way of Piedmont, Anniston, Talladega, Childersburg, Calera, Selma and Demopolis; with the Rome and Gadsden and Attalla line, the branches from Woodstock and Mobile Junction, and the Akron and Marion Junction line, passing through Greensboro and Marion, the Southern system covers a great part of the productive and industrial portion of the State, and must always play a most important part in its progress and prosperity. It not only gives the local traffic facilities, but lines for traffic to and from the great centers of the North, through Tennessee to the central North, through Memphis to the West, and by its various lines to the coast cities for the export trade.