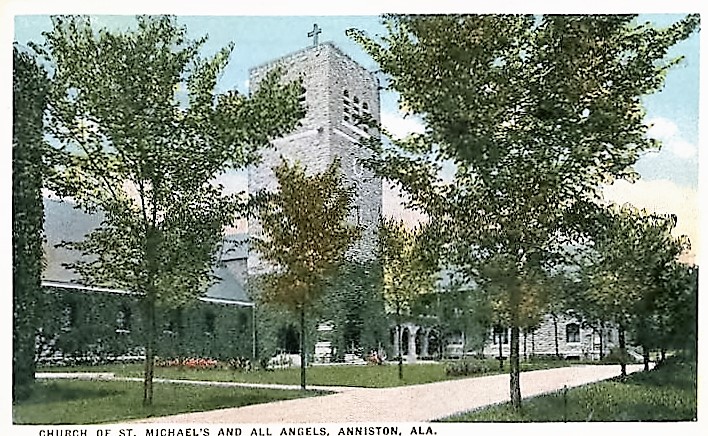 J. A. Gulledge is one of the few remaining settlers in Anniston, if coming here well in advance of the city itself entitles him to that distinction. He came in 1874 and has been here continuously since.

Besides the furnace, which stood where the Robinson or Adelaide cotton mills now stands (1918), the company store of Alabama Hardware Company is now located and and the mill, corner Tenth and Noble, where N. E. Ory’s store is, there was little else here when Mr. Gulledge came, except the company’s farm that stretched from Oxanna to the base of Blue Mountain.

The railroad from Selma to Rome, then known as the Selma, Rome & Dalton, now the Southern, was the only railroad, and on the west side of it were two other farms, the one owned by Charlie Cooper and the other by Jack Lloyd. There were a few other settlers about, but those mentioned were the chief figures.

“The Company” which was represented chiefly by A. L. Tyler, Sr., and Samuel Noble, also had a boarding house situated not far from the Noble theatre and known as “The Hotel.” Mr. Noble lived at the old Jesse Maddox place, just across Ninth street from the Calhoun Grocery Co., while Mr. Tyler lived at the present A. L. Tyler, Jr., home. The Noble or Maddox house was torn down several years ago and removed to West Anniston and rebuilt and is yet doing service as a dwelling. It was first constructed in the early 30s of 1800.

Grace church had its incipient organization and construction in a small building not far from the corner of Tenth and Nobel, where a little school was taught and church services held.

The company also owned two rows of cottages, one known as Cottage Row and the other as Smoky Row. Cottage Row still exists in the little red cottages that stand on the east side of Noble street between Sixth and Seventh streets. (1918) There original location, however, was on the west side of the railroad in the main, the car shops now occupying the greater part of the land on which they were at first built. All those cottages were occupied by laborers who worked at the furnace, the ore beds at the forest making charcoal, or on the farm of the company.

Mr. Gulledge says that for sometime after coming here he worked on the company’s farm and is therefore thoroughly familiar with every inch of it. He remembers that there was a considerable hill on what is now Eleventh street, rising fully twenty feet higher than at present from Noble street to the rear end of the two bank building now occupying the opposite corners. (1918) Also that the crossing of Snow’s creek at Thirteenth and Noble was accomplished by a steep descent to the channel and the hill on each side involved a “tight pull” for the teams hauling coal and ore. Moreover, the stream was crossed by pedestrians on a “foot log.” “And, somehow” said Mr. Gulledge, “I remember that stream as a far more pretentious one than it seems to be now.”

“No, indeed,” said Mr. Gulledge, “Anniston had not at the time of my coming here entered the dreams of the most hopeful. It was a place of considerable industry and activity, but in this regard was new, as the furnace had been built only a year before and was a rather crude concern at that. The farm amounted to about as much as the furnace as a money making proposition.

“And as I remember things, Dr. Brock opened a drug store not far from the corner of Eleventh and Noble, though at that time there were no streets. That drug store was run by Dr. Brock’s brother-in-law, John McCain, a crippled man. Dr. Brock himself being a practicing physician, and if my memory is not at fault, it was W. H. Williams who first opened a dry goods store here. That was later, however, than the period of which I have been speaking.”

Continuing his reminiscence Mr. Gulledge said: “I have lived here to see Anniston grow from its birth to its present size and importance in the business world. I love the town. For forty-four years I have been a citizen here and have watched the development of the farm in which I toiled at the beginning into a beautiful city, where life is pleasant and the people happy.

includes some lost & forgotten stories of their experiences such as: