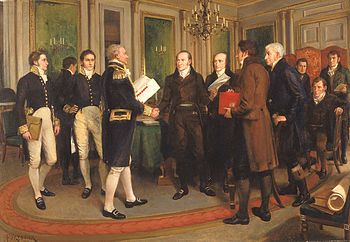 This story can also be found in the book Alabama Footprints: Immigrants

The War of 1812 confirmed the separate existence of the United States and Great Britain as well as the future country of Canada. Alabama was still a part of the Mississippi Territory during the war, and a small section along the Gulf of Mexico was part of West Florida.

The War of 1812 ended with the signing of the Treaty of Ghent on December 24, 1814 which returned all territorial conquests made by the two sides.

The Battle of New Orleans which took place during the War of 1812, was actually a series of battles between December 24, 1814, and January 8, 1815. Together the battles became known as the final battle of the war of 1812.

However, an interesting article from the Florida Times Union in 2010 reported that the latest research revealed the final battle of the War of 1812 was not at New Orleans, as most historians report, but a relatively overlooked fight in Alabama that took place in January 1815.

An excerpt from the newspaper article states the following:

It turns out they were wrong. A member of the Guale Historical Society has found proof that the last land battle was actually fought weeks later on Feb. 8, 1815, at Fort Bowyer in Mobile, Ala.

Historical society member Barry King discovered the information while researching the Point Peter battle to prepare his presentation on pirates in the area two centuries ago.

“When I was doing that [research], I kept seeing Fort Bowyer pop up,” King said. “I later confirmed it in a U.S. Army history book. I just want the truth out.”

Treaty not ratified until February

According to the Library of Congress, The Treaty of Ghent was not ratified until February 16, 1815, and fighting continued on land up until the date of ratification.

The British sailed away from New Orleans to the American occupied, but Spanish owned Mobile Bay. Here the Second Battle of Fort Bowyer was fought on February 7-12, 1815. This was the last land battle between the British and the Americans and the beginning of a British campaign to take Mobile from the Americans. Jackson boasted that “ten thousand men cannot take it,” but the fort was surrendered to the British after a five-day siege.

British set out for Mobile

With the advent of peace came decades of stability, improved diplomatic relations and economic growth, the so-called “Era of Good Feelings.” A sense of self-confidence pervaded the nation, and it inspired the western expansionism that characterized the rest of the nineteenth century. The War of 1812 allowed the new nation to break free of its colonial past and told the nations of Europe that a new player had emerged on the world stage.

A key reason that American frontiersmen in Alabama were in favor of the war in the first place was the threat by various Native American tribes due to the intervention of British agents in Canada. The frontiersmen wanted to access lands which the British acknowledged belonged to the U.S. The British continued to block these lands by inciting and arming the Native Americans. With the death of Tecumseh in a battle in 1813, the First Nation military power ended. The natives were the main losers in the war, losing British protection, they never regained their influence.

In Alabama, the Creek Indians were defeated at the Battle of Horseshoe Bend in 1814. This battle finally ended the threat of Native American hostilities. It opened vast areas in Alabama for settlement as plantations and farmlands.

The U.S. occupied all West Florida during the war. In 1819 the rest of Florida was purchased from Spain, and this purchase closed the base of weapons for hostile tribes. Many Creek Indians escaped to Spanish Florida, where they joined the Seminoles and continued a long resistance known as the Seminole Wars.

This story and more can be found in Alabama Footprints – Immigrants