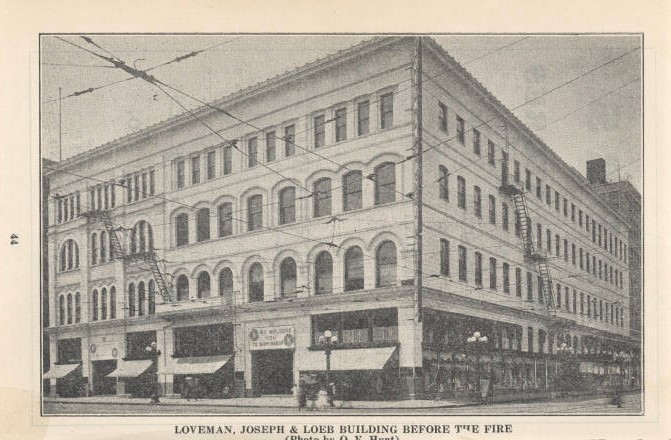 People Across the Country Heard the News.

As people across the country were tuning up their radio dial for something of interest to listen to on March 10, 1934, many were astonished to hear the exciting voices from a WAPI announcer in Birmingham, Alabama as he reported the minute by minute details of a spectacular fire in downtown Birmingham.

The fire was so severe that WSGN broadcast the event directly from the fire lines for seven continuous hours for listeners in Birmingham and North Alabama. WAPI, another radio station in Birmingham, had an even larger audience outside of the state, and also reported about the spectacular fire. Radio stations across the country picked up their broadcast and rebroadcast the report.

The fire was believed to have started around 12:30 P.M. The radio station, WSGN was talking to citizens, on Third Avenue between Nineteenth and Twentieth Streets, in an episode they called ‘Inquiring Microphone’ when they heard the clang of a fire engine. After their program ended around 12:45, Bill Cooper, the announcer, rushed down the street to see what was happening. He reported to the radio station by phone that Loveman’s was on fire.

More reporters were sent to the site so they could broadcast live. G. F. Bishop, Gene Pournelle, Ed Murphey, and Doug Horton from the WSGN staff, were at the scene within minutes. At first the progress of the blaze was slow, but suddenly the flames went through the building and out the windows. Then the roof fell in and showered sparks over neighboring properties,. Excitement grew in the crowd of people near the fire. Shrill police whistles, and the anxious cries of the people welled up, and added to the announcer’s voice.

The WSGN announcer was standing on a stool, watching the scene over the heads of the crowd. When the walls began to fall, the crowd was forced back from the intense heat and he almost tumbled into the melee. Other nearby buildings began to catch on fire. Flames shot out from the top floor of Pizitz department store and the Calder building, but was quickly controlled by the fire men.

WAPI Broadcast from Across the Street

A crew from WAPI tried to set up on the roof of the Alabama Theater but flames began spreading toward them and officials of the Fire Department ordered them to move. While they were moving to safety, Idris J. Jones of WAPI, came close to losing his life when a wall of the Loveman’s building fell near him. The fire was spreading so fast that the WAPI radio crew had to settle for broadcasting from across the street on the fifth floor of the Pizitz Department Store.

Leonard Thomas, of WAPI, took care of the switchboard and main lines while Sterling Hicks monitored the broadcast and placed long distance calls. The only long-distance lines out of Birmingham were from the studios of WAPI; all other long lines were out of commission because the fire had enveloped the Southern Bell telephone building across the street from Lovemans, and the equipment was destroyed. Another announcer by the named of Jack Baily, handled the broadcast.

Tom Allen, an ambulance driver for the Luquire Funeral home, stated that when he arrived, the fire was still confined to the basement of Loveman’s, and the firemen were ripping the boards from the first floor so that they might fight the fire more directly.

Allen said he had to leave when the top of the ambulance caught fire and his clothing was scorched. T

Then he saw the flames leap across the alley and set the Southern Bell building catch fire, so he rushed into the telephone building to warn the workers to leave as soon as possible.

Food and coffee were brought to the firemen around five o’clock. From that hour on, firemen began to fall out. Several had to be taken to Hillman Hospital. Another ambulance driver said that he took a number of firemen to the hospital who couldn’t walk or talk. Their eyes were red and their throats inflamed and raw from the smoke.

A. J. Virciglio, who worked with Tom Allen, said he was impressed by the bravery of the firemen.

S. E. Nelson, another ambulance driver from Luquire said he forgot his overcoat and that with the spray of the water and the coldness of the night, he had difficulty keeping warm.

The drivers remarked that Mr. Louis Pizitz supplied the ambulances with clean, dry linens and blankets and he set up a first aid station at his store. When his men begged him to leave and go home, he refused. He gave innumerable pairs of gloves and shoes to the firemen and had coffee and sandwiches sent to the fighting men.

Dr. Coyle’s Version of the Fire as Told to Miss Mary Timmons

“From the time I was called to a duty which I enjoyed performing – taking care of as many as possible of the fifty-eight or more patients treated during the Birmingham fire –I, with the rest of the doctors and nurses, was kept exceedingly busy. Through a miracle or an act of God, practically all injuries sustained, although very painful at the time, were more or less temporary injuries; the biggest portion of the patients being treated were from utter exhaustion or suffocation from smoke and heat, exposure to the extreme cold and weather under which they worked, and in some instances some of the men actually looked (to a less experienced person) as though intoxicated. They reeled and staggered from the unbelievable, exhausting fight these heroic fire laddies put up not only trying to save Loveman’s but in succeeding as they did under the adverse weather conditions in saving all of the metropolitan area of Birmingham.”

Commissioner Downs’ Version of the Fire

“The fire was unfortunate from many angles. First, in that it occurred on Saturday afternoon when the usual large shopping crowds were in the downtown district and in this particular store. Secondly, that it occurred on a day when there was a very strong North wind blowing, bringing with it rain which froze almost as soon as it fell, the wind in itself creating a very unfavorable condition from a fire fighting angle and the ice on ladders and window ledges making conditions for the firemen and volunteer workers very dangerous.

In view of the fact that this building was approximately forty-seven years old and built of heart pine, with the floors saturated with sweeping compound oil for years and years, and of course the building being filled with an inflammatory stock of goods, it was most remarkable that the fire was confined to such a small area. Of course, there was some damage to some of the adjoining buildings, but, as a whole, this was rather of a minor nature. One of the most remarkable features was the fact that when this fire did develop into an open blaze, it enveloped the whole building from top to bottom within the space of a few seconds, after which the walls fell on every side, and although firemen were directing streams of water of the fire from every angle and spectators were pressing up close to the scene of the fire, there was not a single person fatally or seriously injured, which considering the weather, the slippery and dangerous conditions of the ladder treads, window ledges, etc., was, I believe, a record for a fire of this magnitude.”

The raging fire swept through four buildings, including one of the city’s largest department stores, with a loss of $3.000,000 and caused injuries to 39 persons, most of them firemen. The other buildings damaged were Calder Furniture Co., stock and building, Southern Bell Telephone Co., building and equipment and a five-story vacant building.

When the first alarm was sent in, Loveman was in the midst of handling the noonday crowd. As the alarm spread through the store, the customers, estimated to number 3,500 scattered on every floor, filed out with the 600 employees close behind. Firemen said the blaze, apparently started from a short circuit in the “false” basement. They thought it was contained in the false basement, but it broke through the first floor and when it reached 500 gallons of lubricating oil in the automobile accessory department on the balcony, flames shot up the outside. Employees and shoppers were ordered out of every store on the block. Even the Alabama Theatre, abutting the department store, was emptied.

Twenty-Four Placed in the Hospital

Eighteen days later, a five-story building had been renovated from basement to roof – redecorated — equipped with modern fixtures – and completely restocked with new merchandise.