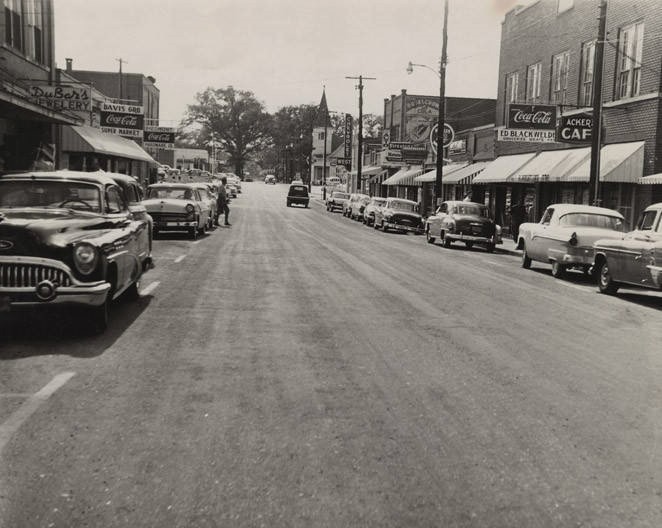 I was riding through Piedmont, Alabama, a while back when something caught my eye. I had no idea that after all these years it still existed. But there it was painted on the side of the building—Steward’s 10¢ Store. Steward’s 10¢ Store was owned and operated by R.M. Steward, often known as Jimmy—and my Daddy. My first memories of his store occurred when I was still a toddler, three or four years old.

In the afternoons after school, my oldest brother, Mutt, would set me on the handlebars of his bike and take me to town to be with Daddy. I can still remember how those bars hurt my little behind. That was definitely not a desired way to travel. At any rate, both my brothers worked in Daddy’s store after school, and when I got older, I spent my summers there.

Steward’s 10¢ Store was located on Center Avenue in the building owned by Dr. Joe Woolf, whose office was upstairs. The building was old even back then—we’re talking World War II era old. In fact, during the war, when Daddy finished working at the store, he would do volunteer work at Fort McClellan. He used to say that he wanted to do whatever he could to support our troops.

Daddy designed the interior of the store and built all the counters by hand. His floors were wooden and oiled. I can still remember, at closing time, having to sweep the floors with a red compound to keep down the dust.

In the back of the store was a room for receiving shipments of merchandise. At one end was a bathroom, actually a cubicle with a toilet, and on the other end was a steep staircase leading up to a stockroom. How I hated those stairs! As I said, they were very steep and narrow, and there was no rail at the top. Daddy could go up and down those stairs like a mountain goat, but if I had to go upstairs to get something, I couldn’t walk down (I am afraid of heights). The only way down was to send the box down by itself—and hope that nothing broke—and then I would sit down on the top step and come down one step at a time. I ruined a lot of pairs of shorts that way.

Halfway up the stairs was an offset. Here was Daddy’s office where he kept all of his catalogs and inventory records. He could work at his desk without being disturbed and at the same time see everything that went on in the store. It was also a neat place to play when I got tired of dusting counters. I kept my doll and an assortment of toys up there.

My favorite spot in the store was the coke box near the entrance. Yes, it was a coke box complete with a 50 lb. block of ice and filled with cokes, Orange Crush, 7 Ups, Fanta grape and orange, and sometimes root beer. Drinks cost a nickel, and they were so good ice cold! Daddy had a hard time keeping ice in the box. The ice was delivered early in the morning before work and left outside on the sidewalk. If Daddy didn’t get to work early on hot summer days, the ice would be partially melted. Then all during the day we (the employees) would chip off some of the ice for our drinks. The store was not air conditioned; so an ice-cold coke or grape (or water) was really refreshing. On Saturdays when we worked longer hours, the ice would be gone long before the day was over, and Daddy would have to order more. I can still hear him of those long hot days: “Stop eating my ice! We need it to keep the drinks cold!”

Just outside the front entrance, Daddy had an old fashioned scale. You could stand on it, put in a penny, and get a little card with your weight and your fortune. When I was small, I enjoyed sitting on the scale on Saturday evenings. It was cooler out there, and I enjoyed watching the people go by. I especially liked to be there when Mrs. Mae Woolf came by to pick up her husband, the doctor. She always spoke to me and waved. And I loved her big white Cadillac!

The candy case stood just inside the front door. It was a long glass case with sections to hold orange slices, coconut macaroons, chocolate drops, marshmallow peanuts, jelly beans, Hershey kisses, and many other kinds of delicious fattening things. The candy was shipped in large cases and then transferred to the glass bins for sale. Before the candy was unpacked, however, the bins had to be cleaned. I learned how to remove the glass partitions and scrub them. Then I could refill the bins with fresh candy. When a customer wanted to buy some candy, it was weighed in the candy scale and then bagged. It was usually sold in amounts of 1 cent, 5 cents, 10 cents, and 25 cents. Sometimes a customer would buy a pound. I always enjoyed working at the candy counter, but I was so small that I would have to stand on a coke flat in order to reach the top of the case.

The store was organized into departments. One was the notions counter where you could find thread, needles, thimbles, scissors, ric rac, ribbon, snaps, elastic—anything you needed for sewing. Next was the baby counter, then a clothing aisle, and a kitchen counter with dishes, glassware, and pots and pans.

The hardware department was in the back of the store. Daddy had an old round metal container for nails. The shelves turned like a lazy susan and had compartments for different sizes of nails, screws, and bolts. There were large rolls of oil cloth sold by the yard, oil lanterns, hammers, saws, pliers, sockets, wrenches. They were all manual tools. Daddy didn’t sell power tools.

Daddy also stocked window shades. If a customer needed a shade cut to size, you unrolled it and cut it to the desired width with scissors. Then you had to saw the wooden roller and reattach the metal end. We didn’t have a machine to cut the shades, and I always dreaded for a customer to ask me to cut one. I never could cut it straight, and Daddy would get mad at me for wasting a shade.

I worked hard in Daddy’s store. I loved it! I felt so grown up when Daddy would let me run the check-out counter and work the cash register, He taught me a lot about business, too—how to take inventory, how to design a display, how to order merchandise, how to keep records. But I was still a kid, and I loved to play, especially with my brother, George, who was a bigger kid. We had some fantastic water battles with water guns we “borrowed” from the toy counter. We would lean out of the window in the stock room upstairs and shoot people passing by in the alley beneath us. They never knew where the water was coming from, because we would duck down below the window sill. Most of the time, George and I would just shoot each other, and we would come down stairs to serve customers with our hair and clothes dripping wet. I often wondered what people thought of us; I guess they just dismissed us as being those wild Steward kids.

Daddy sold his store when he retired. But for many years after that, he still made an impact on the lives of his family. He was a devout Christian, and he told me once that he hoped the Lord would let him live long enough to see all of his children saved. He didn’t want the Heavenly circle to be broken.

Daddy is gone now, but the memories evoked by that sign on the wall will stay deep in my heart as long as I live. And Daddy’s legacy of love and faith will remain alive in his family for many generations to come.