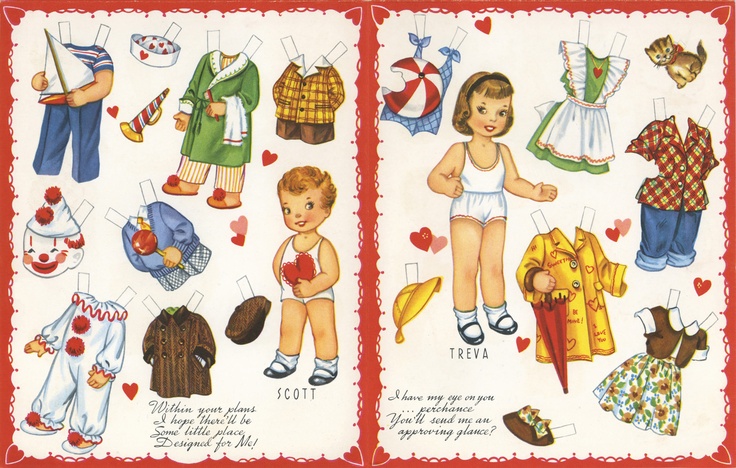 I remember cutting out dresses for my paper dolls too.  This story and video will bring back memories.

A Paper Doll To Call My Own

It happened again! It always happens just as I am going to bed! Some long ago tune comes into my mind and I spend the first half of the night trying to remember the words.  All the words aren’t necessary for this article, but perhaps you’d like to remember with me this song popularized by the Mill’s Brothers in 1942.

I’m gonna buy a paper doll that I can call my own,

A doll that other fellows cannot steal,

Will have to flirt with dollies that are real.

When I come home at night she will be waiting.

She’ll be the truest doll in all this world;

I’d rather have a paper doll to call my own

Than have a fickle minded real live girl!

I guess I’ve had a million dolls or more.

I guess I’ve played the doll game oe’r and oe’r.

I just quarreled with Sue; that’s why I am so blue;

She’s gone away and left me just like all dolls do.

I tell you boys, its tough to be alone.

And it’s touch to love a doll that’s not your own,

I’m through with all of them. I’ll never bawl again.

A box full of memories

In my early childhood, I knew nothing about pretty paper dolls that could stand; they had multiple changes of dresses, hats, purses that could be fastened to the standing doll by bending little paper tabs underneath the body. 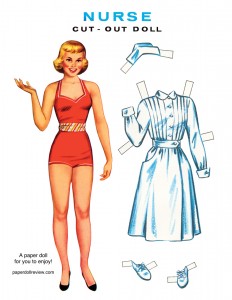 A box full of memories

I still have a box in which my mother saved early childhood memories for me. Recently I unfolded paper dolls she made for me. She would take a strip of brown wrapping paper about 15’’ by 5’’, fold it over and over in what she called “accordion pleats.” Then holding the folded paper tightly, she used her sharpest scissors as the cut through all layers. I remember the row of little girls or boys that suddenly appeared with joined “hands” when the paper was unfolded; it seemed like magic to my eyes. 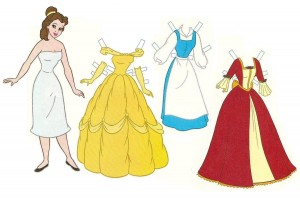 In this same box of memories I found eight sheets of lined notepaper, yellowed and ragged around the edges from age. In my handwriting I identified their having been made by a Joyce Ray, age 8, in the forth grade. My paper dolls were cut outs from a Sears & Roebuck catalog. Evidently, my assignment at school had been to provide pictures of what my home would be like. I don’t think there was a brick house in our little town, but somewhere I found a picture of a brick house and pasted in on page one, using flour paste and labeling it “my home.” Then followed seven more pages of Sears cut outs: My Porch, My Living Room, My Dining Room, My Kitchen, My bedroom, My Bathroom (I don’t think I’d ever even seen a real bathroom. Ours was outside and down the hill!)

The way I hoped I would look

Page eight was the crowning page. It was labeled “My Family.” Once again Sears catalog came through. I found a picture that looked the way I hoped I would look as a grown-up lady. There was a tall, handsome man for a husband and in between were two little boys! And that is how it turned out in real life (except I never looked as pretty as I had hoped!). Those memories have been fun, but life with my real, live family has been blessed indeed.

Joyce Ray Wheeler was born in Kentucky, but after marriage and two sons she and her husband, Dr. Ruric Wheeler she moved to Birmingham, Alabama in 1953. She was a former school teacher for a short while.  She was active in the Faculty Wives Club at Samford University and a member of Shades Mountain Baptist Church where she taught Sunday School classes for women for many years. She enjoyed travel, her grandchildren and writing her memories. Joyce passed away November 2. 2012.

Discordance: The Cottinghams (Volume 1)  A novel inspired by the experiences of the Cottingham family who immigrated from the Eastern Shore of Virginia to Bibb County, Alabama