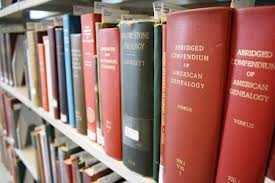 That book may as well have been tap-dancing on the shelf to get me to “listen.”

I was researching as much as I had time for on one of my cousin’s lines as a Christmas surprise for him (a line that he and I don’t share, so it was new to me.) The library was very crowded that day, as there were several tour groups there from different states doing research.

The only microfilm reader I could find was on a lower floor than the one with the films, tucked behind stacks of books. So I spent all day trekking up and down between floors, accessing and returning films. I had done my homework, so I had a whole list of films I wanted to check that day. 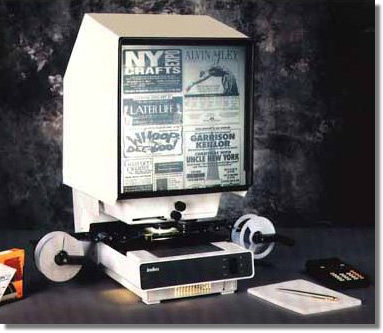 Every time I walked down the aisle between two rows of books, however, one book on the shelf caught my attention. It didn’t stand out in any way; it was just an ordinary, black-covered, medium-sized book, and the title meant nothing to me. Still, every time I passed it,I would think, “Yep, there’s that book again.” I must be a little slow to pay attention, but finally, by late afternoon, that book may as well have been tap-dancing on the shelf to get me to “listen.”

Finally, I literally said, “All right! I promise to look at you before I leave.” And I did. The title notwithstanding, that book was partially about the very people I was researching for my cousin! I forgot about the train I was supposed to catch, sat down and added much to his Christmas surprise. I hadn’t known what was between those black covers, but “somebody up there” did, and wanted me to find it.

Thanks, too, for your article about scuppernongs! Years ago I wrote a novel set in Georgia in which I mentioned them, and my editors said, “None of us have ever heard of scuppernongs; can we change them to a different kind of grape?” But I stuck up for them and said that every southerner who picked up that book would know exactly what kind of grape they were. Wish I’d had your little piece to send them then! And thanks for all you do to promote Alabama research. – Sharon Jarvis