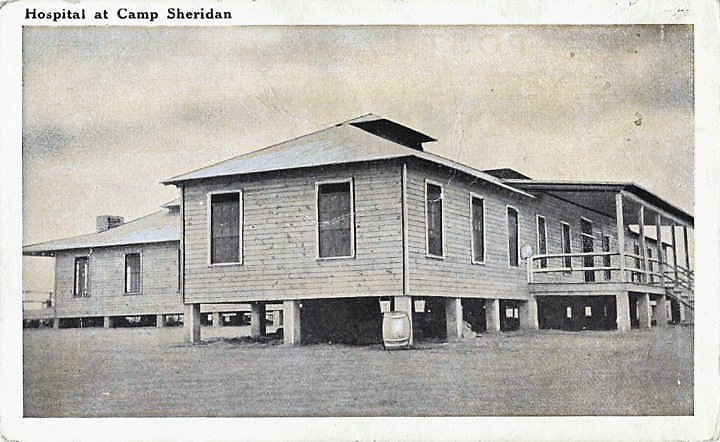 In the following transcribed letter, Lucy describes her work to her son in the influenza ward at the Camp Sheridan hospital.

Transcribed letter from Lucy Durr at Camp Sheridan in Montgomery, Alabama, to her son, Clifford, Written October 21, 1918 (Alabama Department of Archives and History)

This personal letter was written by a mother to her son October 21, 1918 from the influenza ward at Camp Sheridan in Montgomery, Alabama.

The heading of this letter looks very much, as if I, too, were a part of the government, and if I remain here much longer, I will feel that way – At present, I feel humble in the presence of trained women – but I’m already feeling more at home.

“Little Auntie” has written you why I came.

I’m in the Influenza ward – When the patients develop pneumonia, they are taken away. The epidemic, I hear is on the decrease.

[page 2] For five days, I’ve seen nothing but rain and sickness. Rain has made bad conditions worse. I have made some sad observations: one is that a sick man is in a bad fix in the Army. I do not say this in criticism, for certainly the nurse and orderlies are kind.

And since my experience here I will say that the orderlies have the worse job in the Army. At least, so it seems to me. A sweet looking blonde boy came in yesterday, and to-night his fever is running high.

He is on one of the upstair porches. This after noon, I went out to see him and found him nervous & frightened. I asked him if I could do anything for him, he replied, I’m lonesome. I knew that was an invitation for me to stay with him, so

[page 3] 2 I got a chair and sat with him, until supper time. He was from Baltimore and a presbyterian. I could not bear to leave him because he was frightened. “Little Auntie” phoned me tonight, I had a long satisfactory letter from you to-day. Then we heard from you, by telegram of yesterday. I am so glad you are with Paul and Joe.

Joe writes, he will telegraph me, if you blow your nose real loud. Tell him that’s exactly what I want him to do. This evening’s paper, publishes [page 4] the death of Dr. Robert Goldthwaite of meningitis, in France, Sept. 30th. He leaves a wife and four children.

If the “Flu” keeps up, much longer, the casualty list over here, will be larger, than the one in France. You see, I can’t keep off of the Influenza. Seriously, if you get the least sick, telegraph me. One trouble with this epidemic is, the right is not taken of the men in the beginning, in most cases.

I had a letter from John to-day – written Sept. 26th. There was less of interest in it, than any letter he has written since he’s been in France. He wrote that he had recently seen “Harg” Van degraff, who is now a 1st Lt. John is either not a military man, or is “out of luck”. I can’t write you much of interest, while I’m here. When you are too busy & tired to write, keep some cards on hand, & let us hear from you. Love to Joe & Paul. Lovingly – Mother.

Tapestry of Love: Three books in one