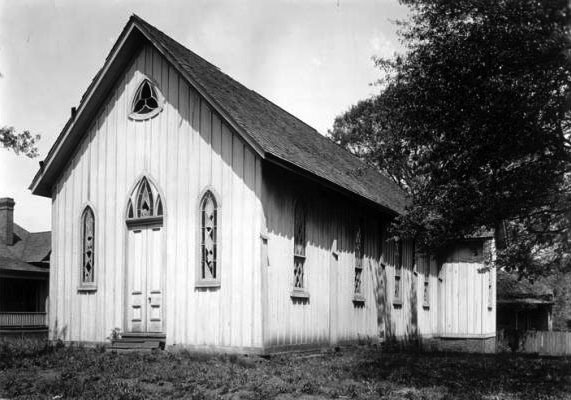 St John’s Episcopal Church was founded in Elyton, Jefferson County, Alabama in 1850. In the decade from 1840 to 1850 the Episcopal Church had no foothold in Alabama between the parallels of Tuscaloosa and Huntsville, except a small parish at Jacksonville, organized in 1849.

Sisters from Connecticut arrive in Birmingham to teach school in 1850

Some time during this decade there came from Connecticut two sisters, the Misses Amy and Maria H. Welton, to teach school. “The loving devotion of these two earnest women to the principles and worship of the church planted the seeds from which sprang up and grew the life which afterward developed, through many difficulties and discouragements, into the organized parish of St. John’s, Elyton, in the year 1850.”i

They had been brought South by William Ely, agent for the land in Jefferson Count granted by the federal government for the benefit of the Connecticut Asylum for the Education of the Deaf and Dumb. They both married prominent local men and remained in Elyton. Maria became Mrs Nathaniel Hawkins and Amy became the second Mrs Mortimer Jordan.ii

The brief and unique Article of Association, with signatures attached, under which the new parochial life began, and is copied from the parish records :

“We, the undersigned, being desirous to form a parish at this place, to be called St. John’s parish, do promise to conform to the doctrine and discipline of the church.” [Signed] Nathaniel Hawkins, Maria H. Hawkins, William S. Mudd, Florence A. Mudd, Mortimer Jordan, Amy Jordan, M. T. Porter, Thomas W. Earle, W. A. Walker, C. H. Williams.

The first vestry of the new parish thus organized were Dr. Nathaniel Hawkins, M. T. Porter, C. H. Williams, and Thomas W. Earle. Mr. Earle was elected secretary, and Dr. Hawkins and Mr. C. H. Williams senior and junior wardens, respectively. The earliest ministrations on record, before this organization, were made in May, 1849, by Rev. Henry C. Lay, afterward the beloved Bishop of Easton, Maryland, and Rev. J. M. Robertson, a noble and devoted priest, both of them from Huntsville, They held services, preached, and baptized a number of children, and administered holy communion.

From the time of its organization in 1850 until 1870, the parish had no regular services. Lay reading,with only occasional visits from the bishop and neighboring clergy, the nearest of whom was fifty-six miles away, at Tuscaloosa, was all the nurture its young life received until 1870, except the short rectorship of Rev. W. Fayette Davidson, who took charge on the 26th of August, 1856, and resigned on the 18th of January.

The clergy, who, besides the Bishops, Rt. Rev. N. H. Cobbs, D.D., and Rt. Rev. R. H. Wilmer, D. D. , in the long interval of twenty years between 1850 and 1870, visited and ministered in the parish were Rev. Messrs. D. D. Flower, H. C. Lay, Thomas A. Morris, William Johnson, R. D. Nevius, J. D. Easter, Thomas J. Beard, and S. M. Bird. The longest intervals between these clerical visits was one of two years and ten months, and another of one year and eight months.

In July, 1870, that faithful and devoted missionary. Rev. J. F. Smith, (who later moved to Talladega, Alabama), took charge and served as rector until July, 1871, when Rev. P. A. Fitts succeeded him, and continued in charge until after the parish had lost its corporate life in the new parish of the Advent, Birmingham, in 1873. The number of baptisms in these twenty-three years was 91 ; confirmations, 57; communicants, in 1872, 51; marriages, 12; funrals, 14.

During the long period of irregular ministrations the services were held at times in the Methodist Church, at others in the courthouse, and in a log schoolhouse on the site of the present school building.

The church building was not erected until 1871 when Hawkins’ father, Williamson Hawkins, donated a parcel of land on Main Street(Tuscaloosa Road) for a new church. An existing frame building and church pews was moved from Ashville by ox-cart from a church who’s members had all died or moved. The following March, a 484-pound bronze bell, cast in Troy, New York, was dedicated at the church. Phillip Fitts was sent as missionary rector to the church. This work was accomplished largely through the self-denying efforts of the daughters of the faithful senior warden and lay-reader, Dr. N. Hawkins.

In the fall of 1871 Rev. P. A. Fitts deacon, took charge. The communicants then numbered fifty-seven, while at the mission point of Birmingham, whose foundation was then being laid, he reported to convention in 1872 only sixteen communicants.

The new parish of the Advent was organized early in 1873, applied and was admitted into union with the diocese at the convention in May of that year, in Mobile, with William Gessner, Ellis Phelan, George R. Ward, R. H. Pearson, S. W. Gillespie as deputies.

Rev. P. A. Fitts became rector of the new parish and in one year the number of communicants increased from sixteen to forty, with a corresponding decrease in the number of St. John’s, Elyton. The first vestry consisted of William Gessner, R. H. Pearson, W. P. Barker, W. J. Milner, and Dr. Sydney Smith. The date of their election and all records of their official action have been lost.

St. John’s was the first church building erected in Birmingham

The Elyton Land Company, in 1871, in laying off the city, generously permitted the selection and donated the beautiful lot, 200 by 198 feet, on the corner of Sixth avenue and Twentieth street, for church purposes, and efforts were made to build a chapel on it in 1872, the first services having been held in a small storeroom on the corner of First avenue and Twenty-first street. The chapel, with some aid from St. John’s, Montgomery, and other points, was completed and ready for use in the spring of 1873 at a cost of $1,200, and was the first church building erected in Birmingham. It was 60 by 25 feet, and seated about 200 persons.iii

Rev. Mr. Fitts continued in charge about three years, nearly one year of which time, having had the misfortune to break his leg by a fall from the railroad platform at Calera, he preached, withal, to his people by his example of patient endurance of a long and painful confinement. This earnest and eloquent preacher and devoted pastor was born in Tuscaloosa, Alabama, reared partly there and partly in Mobile, and educated at the University of Alabama.

He chose the profession of the law, and had entered successfully into practice in his native place, when he was moved to devote his heart and his energies to the sacred ministry. The number of communicants increased in the three years of his rectorship from sixteen to eighty-eight. Having received a call to Clarksville, Tennessee, he resigned, and left to take his new charge in October, 1875.iv

The establishment of Birmingham at the crossing of the Alabama & Chattanooga and South & North Railroads to the east of Elyton sealed the fate of the small congregation. Fitts was charged with overseeing the establishment of a mission in Birmingham and made the journey after morning services each Sunday to preach at Jules Lockwood’s grocery store.v

Elyton families moved to Birmingham to new Church of the Advent

Soon a new Episcopal Church of the Advent was chartered for Birmingham and many leading Elyton families moved to the city and became key members. The older church was rededicated as St John’s Episcopal Church for the Deaf and later moved to Cahaba Heights. The old church was demolished some time after 1980. However, the bell remained. The church moved to Cahaba Heights and brought the original bell with them, where it silently rested upon a pedestal in the parking lot. 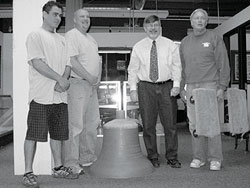 When the congregation was informed of the importance of the bell in 2009, they voted unanimously to donate the bell to the Birmingham-Jefferson History Museum where it is currently located.

The Birmingham-Jefferson History Center needs your support. They have over 13,000 priceless artifacts from Birmingham and Jefferson County’s past and need a permanent home to display the items. For more information about the organization and how you can help save Birmingham’s history, visit their website at Birmingham-Jefferson Center and be sure to click on Membership and Support.