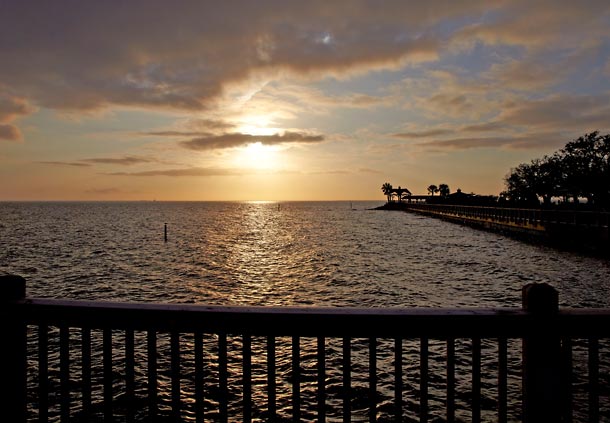 (This is a great place to vacation)

“Christopher Columbus had scarcely been in his grave fourteen years when Pineda discovered Mobile Bay and gave it the most sacred name in his vocabulary – the “Bay of the Holy Spirit,’ wrote Colonel David Holt, Mobile historian. 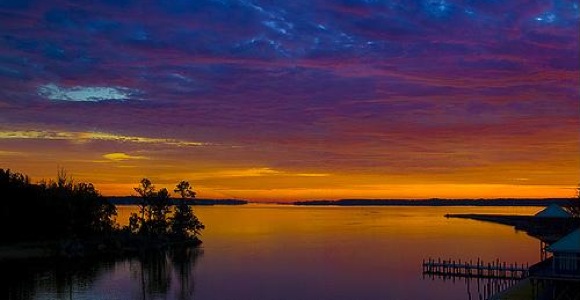 ‘He must have witnessed such a sunset as we often have beheld, when the clouds of the evening were banked in purple splendor like the pictured throne of a reigning deity, with shafts of light flecked with webs of gold across streamers of tender blue radiating from a scarlet sun….”

A deed in the old Mobile records shows the conveyance in 1800 of “forty arpens by the usual depth at Punta Clara. To Eugenio Lavalle of Pensacola. This is the first mention of the famous resort site.”i

Point Clear appears on the H. S. Tanner map of Georgia and Alabama in 1823 as Big Point Clear and the bayshore community at the point is called Williamsburg.

“In 1820, a few immigrants crossed Mobile Bay in a sailing craft and began converting a pine forest into what was to become a noted resort. The original settlers were Caleb Dana and Joe Nelson. 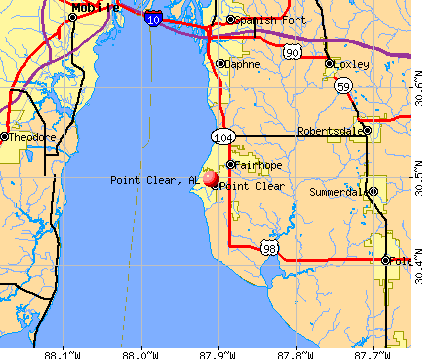 The Dana House was the first constructed. Early Point Clear village was separated from another village, Battles (named for John and James Battle), by Point Clear Creek, just above the Old North Wharf, reportedly built by A. D. Darling and F. H. Chamberlain.

Mr. Chamberlain owned extensive lands in Baldwin County and built the first Point Clear Hotel in 1847 with lumber he brought from Mobile. It was a rambling building about one hundred feet long. The two-story structure had shedded front galleries extending the length of the building. Outside stairs at each end of the building led to the second floor. There were about forty rooms in the hotel.” ii 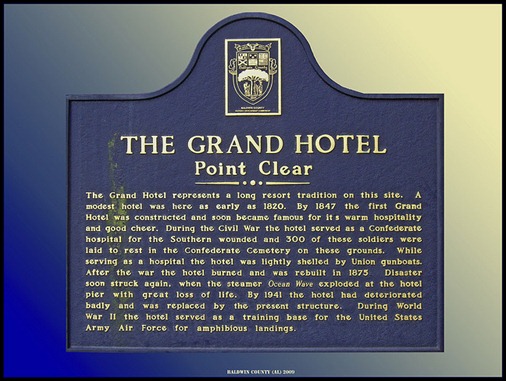 Only accessible by boat

Originally, the hotel was located on the eastern shore of Alabama along Mobile Bay and was only accessible by boat and for the convenience of the guests, the proprietor provided two wharves, one for the male guests and the other for the women since mixed bathing in the bay was frowned upon.iii

“The dining room was a separate adjacent building. Next in the line of buildings was the bar, called the Texas. The name Texas was customarily applied to such buildings in those days, meaning that the building was ‘set apart’ and ‘distinct’ like the state of Texas from the rest of the nation. Another interpretation of the names is attributed to that part of a steamboat called the Texas deck, meaning ‘above other decks.’

The bar was two-storied with outside steps at one end leading upstairs.iv It soon became the gathering place for antebellum southern society and was affectionately called “Queen of Southern Resorts” by devoted clientèle.

Became a hospital for Confederate soldiers

During the Civil War, the hotel was used as a hospital for Confederate soldiers. After the war, the hotel was reopened for guests. The “Confederate Memorial Cemetery” next to the eighteenth hole tee on the Azalea Course of the Lakewood Golf Club pays homage to 150 soldiers, most of whom are identified.

In 1927, the Eastern Shore Memorial Association enclosed a small portion of this tract, cleaned the grounds, and erected a granite marker to the Unknown Confederate Dead. 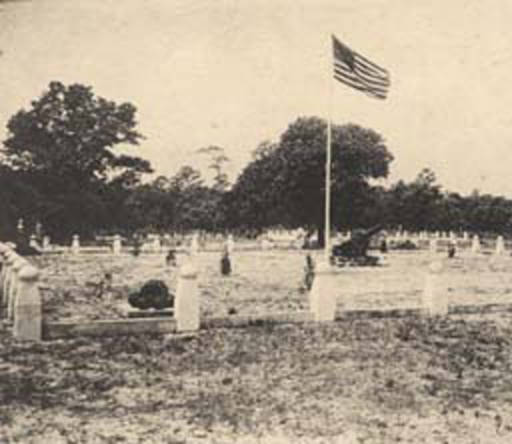 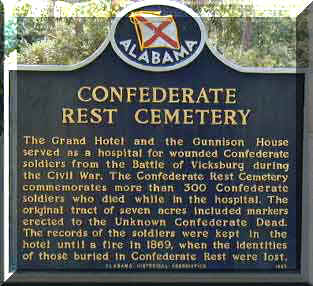 ‘Near the hotel was the two-story frame mansion known as the Gunnison House, in its early days almost as colorful as the Texas. John A. M. Battle built the house in the early ‘fifties and occupied it for several years as his summer home. It was one of the greatest gathering places in the area during the antebellum period. As tradition has it ‘ they rode em high at Gunnison’s.’ Here cognac passed freely, staggering sums changed hands at cards, and sumptuous feasts were served in the old southern manner. 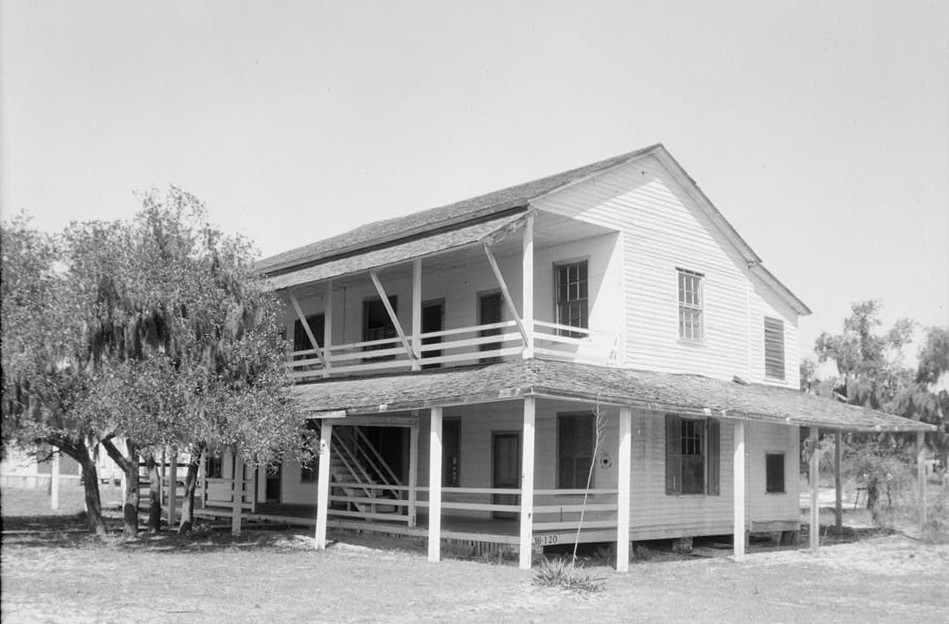 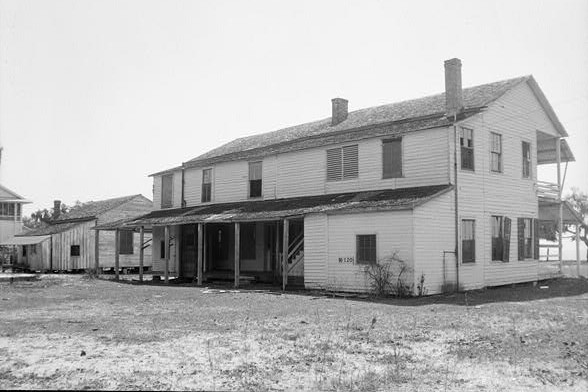 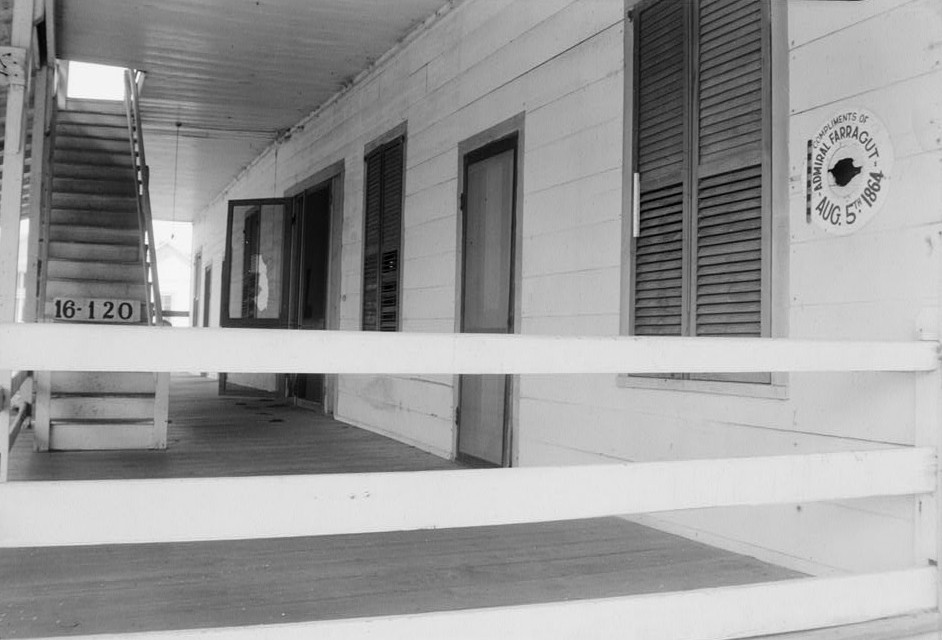 An inscription on a metal plate on the Gunnison House bears the legend ‘Compliments of Admiral Farragut, August 5, 1864.” The plate was placed there by Major James K. Glennon, Confederate soldier and prominent Mobile citizen, as a reminder of a shell hole made by Farragut’s guns when he damned the torpedoes and ordered his ships “full speed ahead!” in the Battle of Mobile Bay.

The Point Clear Hotel also received a shell from the federals. John D. Cain was the caretaker of the hotel during the war years, and his sister, Lucy Cain, who also lived at the hotel, was ill at the time and later died from the shock of the shelling. During the War Between the States, the Gunnison House was used as a hospital, and in the last year of the struggle the 21st Alabama Regiment was encamped immediately to the rear of the house, near the hotel.”v 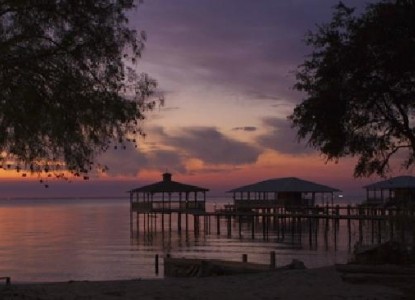 The records of the soldiers buried in the Confederate Memorial Cemetery called Confederate Rest were kept in the hotel at the time of the fire and destroyed by the fire.vi

The hotel continued to operate after the fire until Captain H. C. Baldwin, bought the property and built a second hotel…The Grand, on the original site. He completed the hotel in 1875.

On August 27, 1871, an explosion occurred on the steamer Ocean Wave while she was docked at Point Clear and as she prepared to leave.

The explosion wrecked the steamer and killed more than a score of her two hundred passengers. The Texas bar was used as an emergency hospital for the injured and parts of the wrecked steamer were seen for many years on the bay shore when the tide was low.vii

Captain Baldwin rebuilt the Grand Hotel for $75,000 on the original foundation. It was a two-story building measuring three hundred feet in length and contained sixty suites of rooms. Both floors had arched columned galleries with overhanging roofs that extended around the building. All sleeping rooms opened on the galleries. A large hall extended to connect the front gallery with the rear one. Captain Baldwin died in 1878 and Burton Adams became the manager.

In 1889, J. R. Dowdell and Charles Joseph became the managers and the Grand Hotel even acquired a resident physician, Dr. Samuel K. Reynolds. 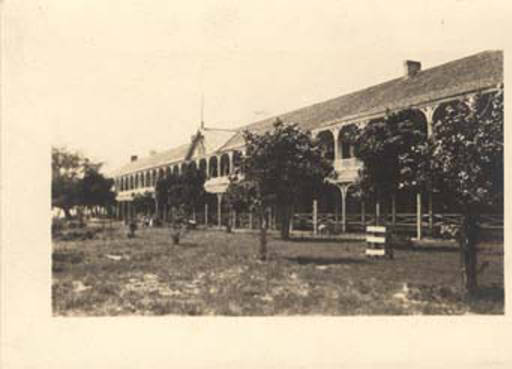 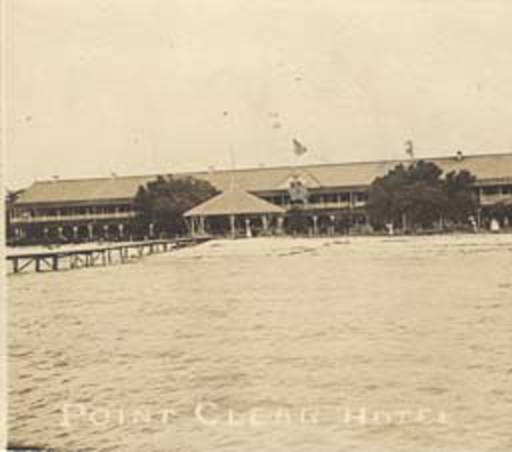 On October 2, 1893, Mobile was hit by one of the severest storms on record to that date and the Point Clear resort suffered the loss of the dining room building adjacent to the hotel and the Texas bar but another dining room was soon built at a right angle to the rear of the hotel. A partnership of Syles and Brown, operated the hotel from 1898 until 1901 when it was sold to Ames K. Glennon. The Grand became the center of the south’s social and leisure life for many years. 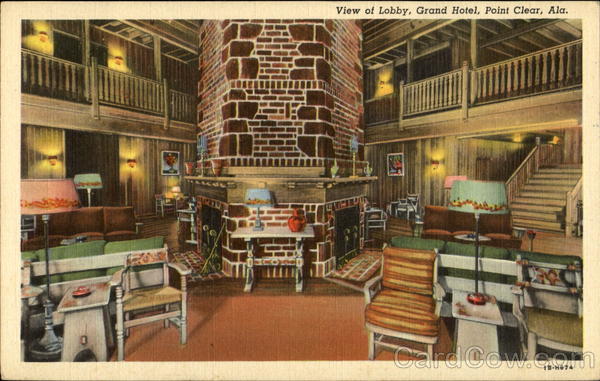 In 1939, Waterman Steamship Company purchased The Grand, demolished and rebuilt the establishment on the exact site of the former ones, and some of the lumber was used in the new building, particularly the heart pine flooring and framing. It opened two years later in 1941. 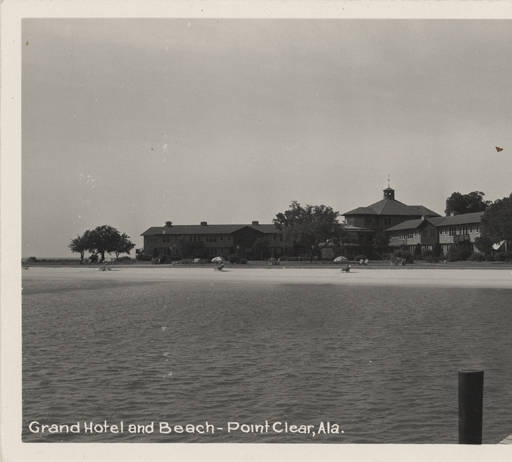 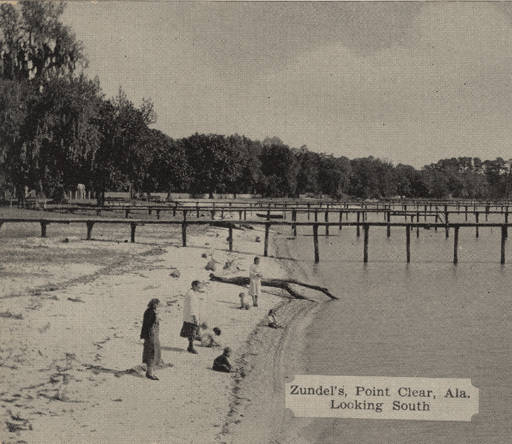 Used by Government during WWII

However, during World War II, it was used as an amphibious landing craft training center.

In 1947, Lakewood Golf Club opened to provide more amenities to the many hotel guests. The golf course was designed by Perry Maxwell and the nines were names Azalea and Dogwood. 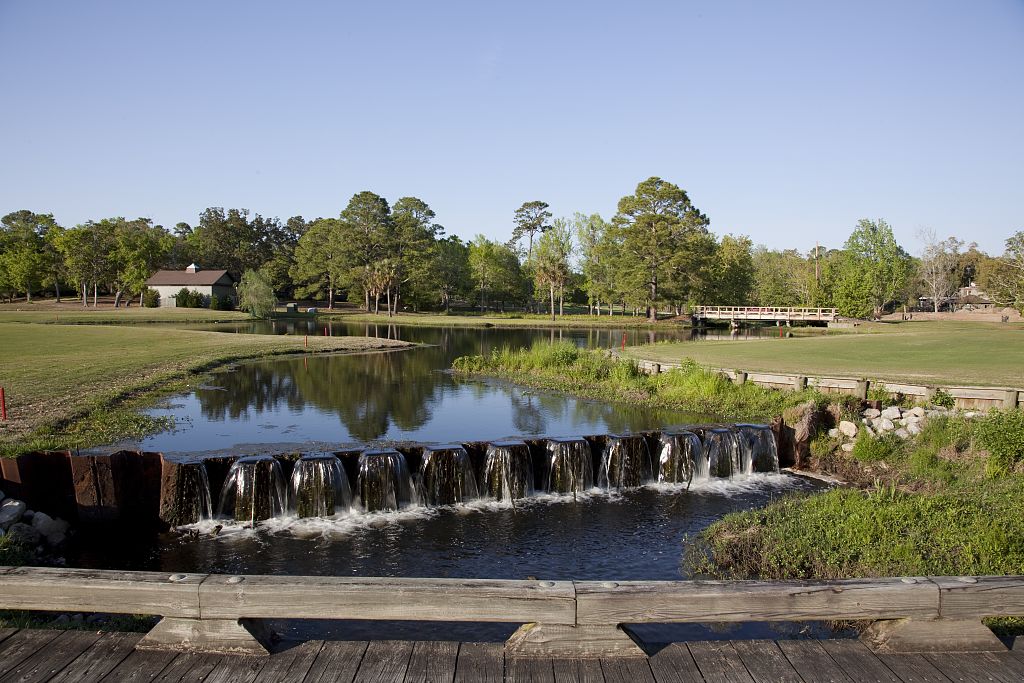 In 1966, a local businessman J. K. McLean purchased again in 1966 purchased the hotel and made further improvements. Joe Lee designed nine more holes and named them Magnolia. Hurricane Frederic, in 1979 caused $4 million in damages and McLean was forced to pass The Grand Hotel to the Marriott Corporation. A major renovation was undertaken and nine more holes, designed by Ron Garl, were added. 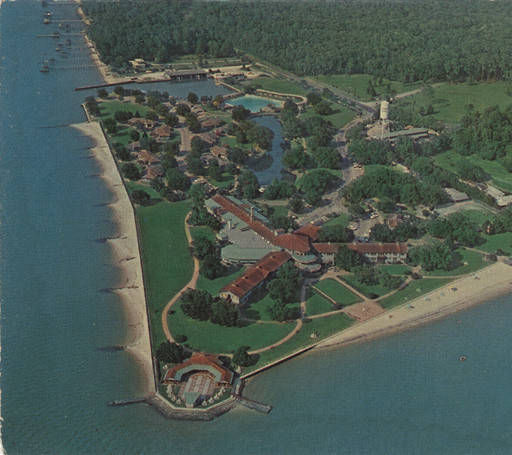 Now funded by the Retirement Systems of Alabama

The Grand is now owned by Point Clear Holdings, which like the Robert Trent Jones Golf Trail is funded by the Retirement Systems of Alabama.

Hurricane Katrina struck in August 2005, with a 12-foot storm surge and damage to the historic hotel but Point Clear Holdings completed a year-long renovation with a cost of $50 million and now the “Queen of Southern Resorts” is more glorious than ever. 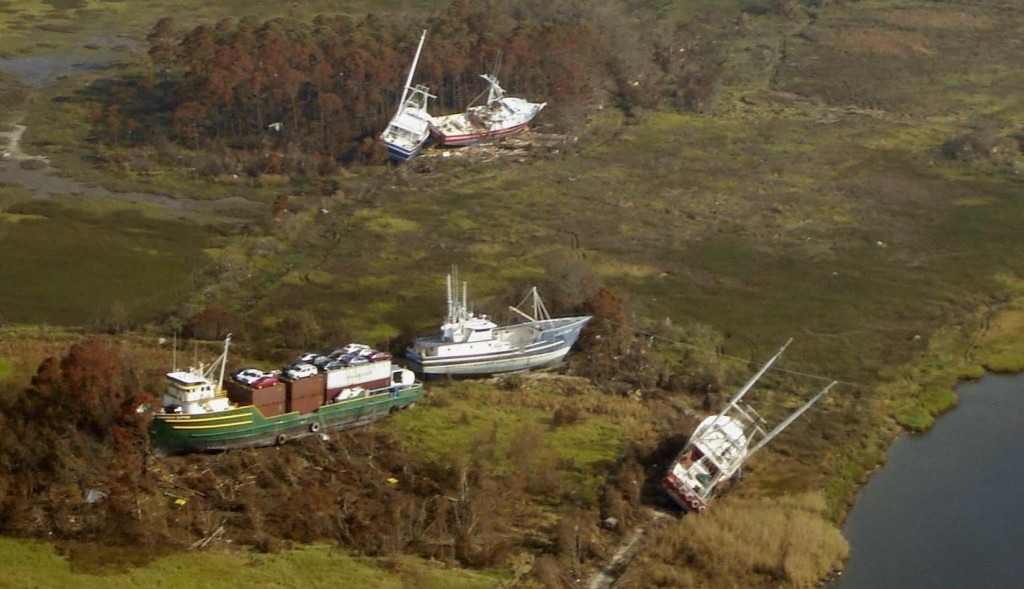 Fireplace and hallways date back 150 years

History abounds in the Grand Hotel. Three old cedar hallways and a brick fireplace that dates to more than 150 years greet you. Fairways are lined with 200-year-old oaks and the Lakewood Golf Shop was rated as one of the country’s top 20.

The Marriott Grand Hotel Spa “took top honors nationally for the second year running and top international honors for the first time, beating out spas from Thailand to Camelback Mountain.”viii Fruit, snacks and beverages are hand-delivered.

i Historic Alabama hotels and resorts By James Frederick Sulzby