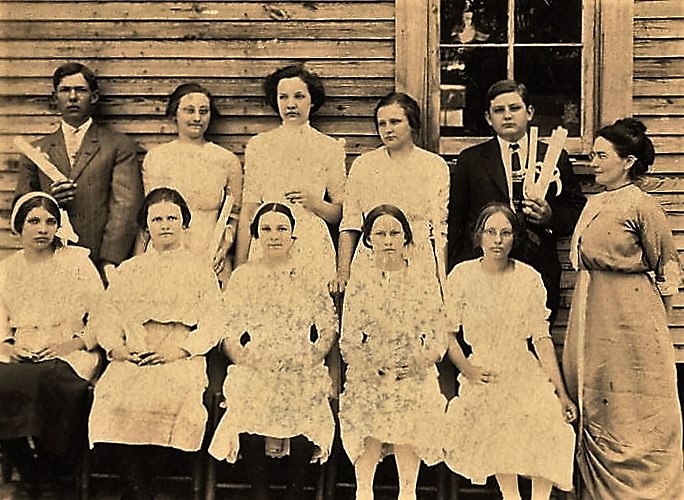 This is a letter and information about two towns that no longer exists,  Honeytown & Hawridge {see picture below of students ca. 1900 of Haw Ridge school) in Coffee County, Alabama and some people who lived there as well as how Coffee county developed out of Dale County. 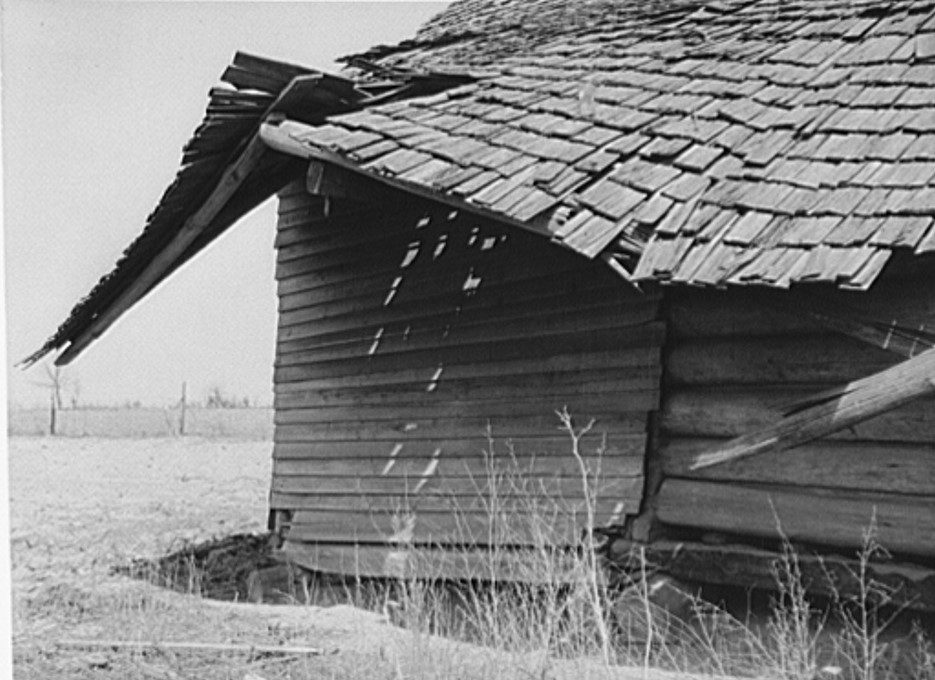 Hi! I hope you can find a place for this on the Coffee County ALGenWeb site for I would hate for the history of Honeytown to be lost. A lot of older people of Dale and Coffee counties do not remember Honeytown, Alabama; some do not know about Hawridge, Alabama either. Christine Grimes Thacker 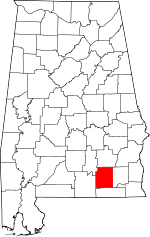 Benjamin William was the son of Henry Benjamin GRIMES (who was born 06/10/1820 in Wayne County, NC and died 03/26/1859 in Hawridge, Coffee county, Alabama) and Harriett Calloway HILDRETH (daughter of Rev. Benjamin HILDRETH and Jemima DOWLING). 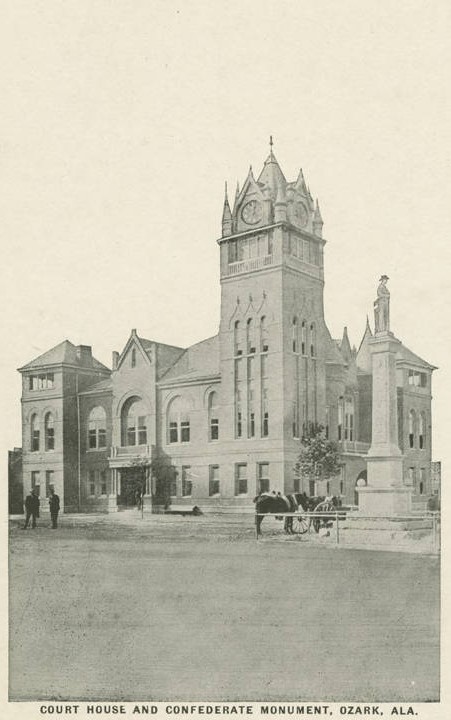 Dear Papa,
I spent the night in Ozark, Ala. this is the County Seat of Dale Co. and just a few miles from your old home, Honey Town. I found some Dowling’s here and am sure they are some of our people. They trace their people from South Carolina. Uncle ?Peceles? Dowling lives here, he is now 82 yrs old I have not been to see him yet, but probably will this morning. I got in here late last night and have not had the opportunity of doing very much investigation as yet. I am waiting on one of Uncle Charles Edwards son to come down and go out to the old home place with me near Honey Town. There are a lot of Prices and Mathews, I mean some of the younger ones. We are going upon the line of Coffee and Dale Co this morning. The Grimes are well known back here and are of fine standing,so are the Edwards they are of the highest standing of any of the old families . The County Seat has been moved here to Ozark since you lived here. Another old family are the Windums, (could this be Windhams?). I will write you more tomorrow when I get back from this trip. I am still working in Birmingham.
(NOTE: no closing, on back of page are these notes) Charlie Culton ? b4/22/1826 d 5/31/1870
Mary A Cockers ? b11/22/1831 d ?/28/1909
Henry Curway? Ceerway? b1/13/1813 d 8/31/1893
Dempsey Dowling b1783 d1865
Capt John W. Dowling 1832-1893 Ozark
Mrs. Rev. D. Dowling b3/4/1787 d 1/15/1859
Ozark Rev Angus Dowling 12/25/1892 son of Noel and Sallied Dowling. Simeon Dowling     5/15/1835
James R Dowling 9/6/1861 (under that is 1840)
This is either places he had been or places to go.
1 Kirk Byrd – place, 2 Seaborn-Pennal,
3 Leavy Dowling, 4 Zion Church,
5 Hawridge, 6 Honey Town,
7 Pealor Dowling, 8 Bear ?Beonsh?
9 Pleasent Hill Church, 10 —–nothing. 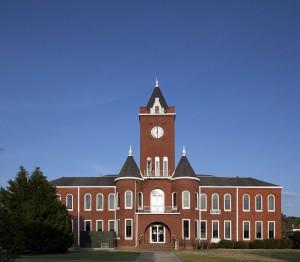 This was written by Martha Carr of Dallas, Texas.
Hey! I found a website which is an index of links to 1895 state maps in color! http://fermi.jhuapl.edu/states/1895/
And, according to that 1895 Alabama map, the GNIS was indeed in error Re the location of Haw Ridge, as it shows it on what was in 1895 the borderline of Dale and Coffee Counties. One big change I notice is that the current county of Houston AL was carved primarily from the bottom half of 1895’s Henry County, also taking the southeast corner of Dale County to make room for it’s growing County Seat of Dothan (Dothen), and leaving Abbeville as the County Seat for Henry County. Concerning Honeytown, I don’t think it was a nickname for Haw Ridge.

R. A. says, “The eleventh and twelfth children of Levi’s and Ann Dowling will be covered in this last section. Both of these daughters were born at Honeytown (now a ghost name in Dale County, as Fort Rucker has enveloped it). They did not marry until they moved to Attala County,Mississippi. Reverend Levi Dowling moved his family to Attala County, Mississipppi after the census enumeration of Dale County in 1860.”

And, on page 86, “Some two score years after Reverend Dowling’s death, the “Southern Star” of Dale County, Alabama, had this to say:””Levi Dowling was one of the first settlers in the Honeytown beat. He was a local preacher of great usefulness. Levi and his two brothers who preached were strict in their lives and in their teaching; they had the courage of their convictions and persisted in planting the seeds of the gospel into the evil that was springing up on all sides. Their course often brought criticism which occasionally ripened into bitter persecutions.”

AHA! But the real story of Honeytown is on page 81: “The last child that Mary J. had was born in 1850 and named Daniel (Jr.) [Mrs. Mary J. Dowling McLean, oldest daughter of Levi, born 3/17/1824, who was murdered in 1853 by a neighbor’s slave, a young “scoundrel” who “beat her brains out” and was chained to a stake and put to death by fire.] It was only a short time before the boy’s birth that Grandfather Levi was involved in a memorable event. His Dale County home near Haw Ridge was so well known by surrounding settlers that it was designated as a polling place for an election that promised to be a hot one! Captain Arch Justice, who had so recently led the local militia against nearby Indians, had now turned his attention to matters politic and he vowed “to split Dale County in two, even if it had to be done with a broad axe”. This had won him a seat in Alabama’s legislature; people living near present-day Graceville, Florida, and Opp, Alabama, were tired of having to go to Newton to transact courthouse affairs.

The decision to cut off Dale’s westhalf into a new county known as Coffee had already been made; a majority vote was to decide the spot on which “Wellborn”, Coffee’s first county-seat would be located. . . . The number of land-owners desirng the location of this government-decreed town is unknown, but at least one was pulling for the selection of his site. He passed out so much honey to the pioneers trooping in to vote, that the community around Levi’s house was known as Honeytown for a century following the occurrence!”

[email protected] wrote: I do not know when Haw Ridge was taken over from Ft. Rucker. I did not know 3 years ago that the town was no longer a town. I was trying to find it and then found out no one knew about it, so i was going up and down highway 27 and could not find a road open. So I went to a GI (Ft. Rucker had some men doing something, can’t remember what) but when I asked him, he told me it used to be >> and then pointed to a clearing of land that was off in the distance, across the road from where we were. If you see the book FORGOTTEN TRAILS by Fred S. Watson, it has a small hand drawn map of old Dale Co. and it has Haw Ridge on the far left about half way down the map.

Read about the colonial period of American history in the historical series, Tapestry of Love. Inspired by true events, these three books take you back to the time when our founding fathers who were immigrants from many countries, began to build new lives and a new country. All historical events actually took place on the Eastern Shore of Virginia and Maryland in the 17th century. Each book has an appendix at the end that delineates truth from fiction and sources and would make great gifts for history lovers or those who want to learn more about the early days of America. The descendants of the family depicted in these novels eventually settle in Alabama.

The series consists of three novels which are available in Ebooks as well as Paperback:

REVIEWS OF RIBBON OF LOVE

The author takes real characters, facts, dates and places and creates a story about life as it might have happened. It is very evident that she spent a lot of time researching how things really evolved to make such a “tale” so appealing and hard to put down. If you have any interest in the Eastern Shore of Virginia and England in the early 1600’s you will find this a must read. You can get the facts and dates out of history books, but this book is like a great teacher, you become very involved in the lives and times of these people when you read this. I’m ready for the next book!!!!

Knowing that this book is written with my family’s history in mind is what peaked my interest to begin the book. But Donna’s storytelling abilities kept me there. I couldn’t put it down, wanted to see what happened next. It is a very enjoyable read Donna Causey