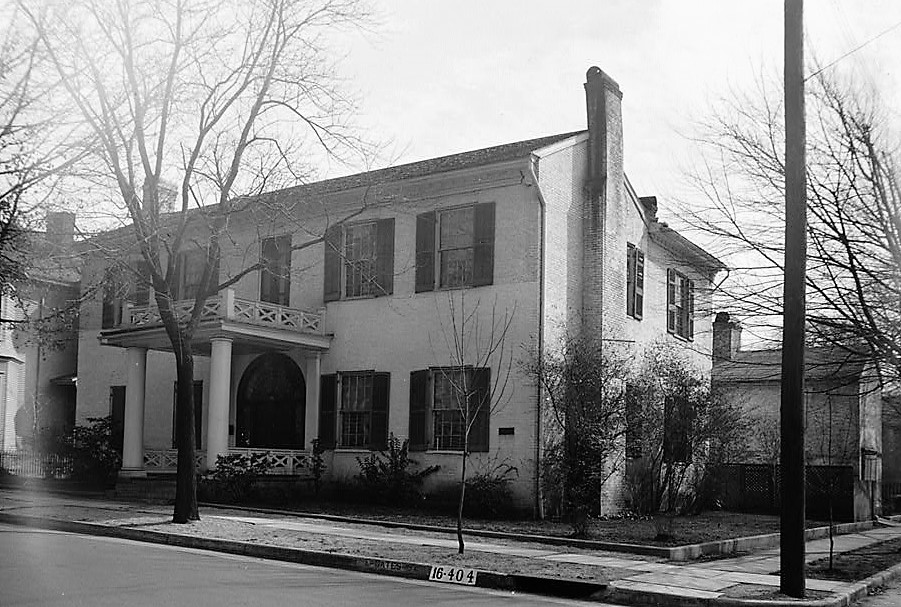 SOME SETTLERS OF EARLY MADISON COUNTY

I have given a brief outline of the early history of Madison county to the year 1820. I thought it best in the article on Huntsville’s corporation to trace it through its changes and progress down to the present time. The superior court and inferior court, as peculiar to the old county, I have also brought down to their abolition by the State constitution and legislative enactment.

Among the subjects of paramount interest to our people, I have written nothing of education, and it would be unjust to our ancestors to leave an impression that they did nothing to foster education. I am constrained to say a few words on that subject.

I am gratified that we have facts to show that the early settlers of the county were actively interested in the promotion of learning. Many of them were men of culture, and as early as the year 1812 the old Green Academy was incorporated by the Territorial legislature, with William Edmonson, John Brahan, Wm. Leslie, James McCartney, Peter Perkins, Charles Burnes, Wm. Derrick, James Neely, John Grayson, Henry Cox, Bennett Woods, Samuel Allen, Andrew K. Davis, William Evans and Nathan Powers as trustees.

Many of these names are familiar to the old citizens of the county. Bennett Woods and Andrew K. Davis, were well known ministers of the gospel. William. Edmondson afterwards settled in Limestone County and was a prominent citizen of that county; nearly all the others are represented by direct descendants or relatives in the counties of the Tennessee Valley.

Many citizens of the county offered to donate or sell sites for the new academy, but the trustees chose the “Green Academy lot”, on which the public school building now stands, which was then on the land of Gen. John Brahan and which was deeded by him to the trustees. With the exception of the academy at St. Stephens, incorporated one year earlier, this was the oldest institution of learning in the State. 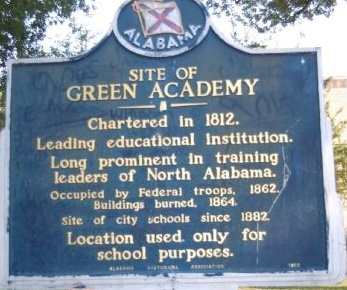 I have never seen a catalogue of the students of Green Academy from the year 1812 to 1820, but it is a well known fact that nearly all of the prominent men educated during that period were students of Green Academy, and that it was the leading institution in the State until the establishment of the State University in 1821. The act of incorporation authorized the academy to raise four thousand dollars by lottery (a favorite scheme of that period of raising money), but there is no evidence to show that the trustees resorted to this method of building up their academy.

In the year 1816 the Territorial legislature donated five hundred dollars for the academy, and in the year 1818 Lemuel Mead, Henry Chambers, Henry Minor, John M. Taylor, C. C. Clay and John Williams Walker were appointed to fill vacancies occasioned by death, removal or resignation. Nor was the interest in education confined to Huntsville alone. 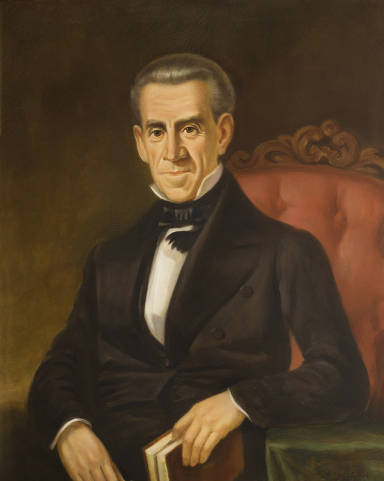 In every part of the county there was an effort to keep up the common schools, and those who can remember the generation raised in the county in its early period will also recollect that very few of them were unable to read and write.

The rising generation of that time could see the necessity of education and fully availed themselves of the opportunity of acquiring a knowledge of reading, writing and arithmetic, which, outside of the academy, comprised the English course of the period.

Many of the ancestors of the citizens in the southwestern portion of the county purchased their homesteads in the year 1818. Among these were the James Collier, Joshua Dillard, John and W, G. Rowe, Harris and Caleb Toney James Wiggins, Charles Betts, Stith B. Spragins, Reuben Crutcher, M. Farley, William East, Wilsey Pride, and Rowland Gooch.

Many of the early settlers prior to the year 1819 had died and many had passed the period of life for active participation in public affairs. But those who came here young men had built up their fortunes as the new country progressed, and when the State was admitted into the Union were fairly entered on a prosperous and successful career.

Merchants, Mechanics and others

Among the merchants, William Patton, Stephen Ewing, John Reed and Francis T. Mastin were among the last survivors. Of this number, if I mistake not, Francis Mastin was the last, dying about the year 1865 at the age of 85 years. Among the mechanics were Thomas and William Brandon, “the builders of the city,” who came here with no property except their working tools, but who rapidly accumulated property by working in brick mortar and were highly respected by all classes of our community.

Martin Miller’s tanyard and Jere Murphy’s blacksmith shops were known to every citizen of the county. Leroy Pope, John Withers, Samuel Allen Cabiness, Uriah Bass, John Brahan and many others brought capital with them to the Territory, which they increased by judicial investments. Of this number Charles Cabiness and Uriah Bass, two of the most enterprising and public spirited of the number, died before the maturity of their plans, the development of which would have given them a leading position among the enterprising men of that era of enterprise.

Among the farmers and planters of the old county, William Dickson removed to Lawrence; the Winstons went to South Alabama and were a wealthy and influential family; John Anthony Winston, a distinguished politician and Governor of the State, was a descendant of this family, several members of which were among the earliest settlers in our county. The Lawlers were among the first settlers in the county, and Jack Lawler left the county at an early day and went to Shelby county, where he was successively justice of the peace, member of the legislature, trustee of the State University, and at his death was a member of Congress, and if I mistake not, was the ancestor of the well known Lawler family of South Alabama.

There were so many prominent and successful planters who came to the county at an early date that it is impossible to mention even a small portion of them, but I have alluded to many of them in giving- names of the original purchasers of the land sales in 1809 and 1818.

Among the physicians and surgeons of the time, Dr. Thomas Fearn was by far the most celebrated— holding a high rank among the scientists of the South. In his youth he had considerable practical experience in the war of 1812, and spent the years 1818 and 1819 in the hospitals and medical schools of Europe.

On his return he took a high position among the physicians and surgeons of the day and was a valuable contributor to many of our medical journals. His article, published in the medical journals, on the use of quinine in typhoid fever, attracted the attention of medical men and was the beginning of a revolution in the treatment of that dread disease.

Among the oldest ministers of the gospel mentioned in the county are David Thompson, Thomas Moore, Woodson Loyd, Robert Hancock and William Lanier of the Methodist Episcopal Church, all licensed before the year 1814; Bennett Woods, John Nicholson, John McCutcheon, John Canterberry and William Bird of the Baptist Church, and Andrew K. Davis and James W. Allen of the Presbyterian Church. 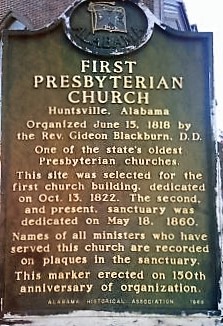 The roll of attorneys who were admitted to the practice in the superior court at Huntsville from the year 1810 to 1820 is an exceptionally brilliant one, and would of itself furnish material for an interesting volume. Among the attorneys admitted to the bar at the first superior court held in Huntsville, in November, 1810, were George Colter, John W. Walker, Marmaduke Williams, Gabrial Moore and John M. Taylor; of whom John W. Walker was Circuit Judge and U. S. Senator. Gabrial Moore was Governor and U. S. Senator, Marmaduke Williams was a member of the Legislature and Judge of County Court in Tuskaloosa county, George Colter was Circuit Judge of the Florence judicial circuit, John M. Taylor was Circuit Judge and Justice of the Supreme Court.

Arthur F. Hopkins was the trusted leader in the old Whig party of the State, was circuit judge and Justice of the Supreme Court. James W. McClung was several times a member of the Alabama Legislature and twice Speaker of the Lower House. A graceful and eloquent speaker and ready debater, he wielded considerable influence in our legislative councils, and in native talent and legal acumen he had no superior, if an equal, at the Huntsville Bar.

Of the early settlers of the county, not members of the bar, who served in the legislature, Thomas Miller, Frederick Weeden, Isaac Lanier, John Vining, John M. Leake, Dr. David Moore, James Penn, James W. Camp and Samuel Walker. Thomas Miller lived near New Market and was twice Speaker of the lower House. Samuel Walker, with a limited education, is said to have been the most accomplished public speaker of his time, and was, whenever he chose to be a candidate, a member of the Legislature, from the Convention of 1819 until he resigned the Speakership on account of ill health, in the year 1840. He lived north of Madison X. Roads in the barrens of north Madison.

Among the noted men of this time was Hunter Peel, who came here about the year 1816. He was an Englishman by birth and had been an engineer in the English Army, and he surveyed part of the public domain sold in 1818, and was an accomplished surveyor and engineer. He was also an excellent draughtsman. In the year 1819 he drew a map of the old county that was a model of neatness and accuracy, which unfortunately was lost during the war. He also drew a map of the old Huntsville corporation, and planned and assisted in the construction of the Huntsville water-works. He was county surveyor from the year 1820 to 1830, which later date was a few months before his death.

iThomas Jones Taylor was a Confederate soldier, teacher, surveyor, held a number of minor offices in Madison County until finally elected Probate Judge, a position he was holding at the time of his death (1829-1894) – This is an abstract from The Alabama Historical Quarterly, Vol. 02, No. 01, Spring Issue 1940 – printed originally in the Huntsville Independent of 1883 and 1884)