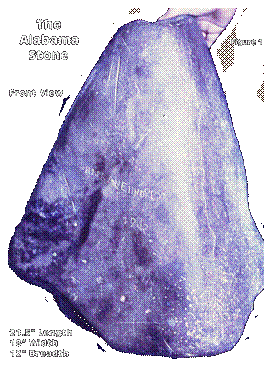 [Some consider this mysterious stone a hoax while others believe it proves early visitors to Alabama in the year 1232.  The stone even made it all the way to American Antequarian Society in Worcester, Mass. to be studied. What do you believe?]

(from an Early History of Tuscaloosa by Thomas P. Clinton 1916)

“Another early and unknown visitor to these parts was the party or parties who placed the “Alabama Stone” west of the mouth of Big Creek and on the north bank of the Warrior, five miles below Tuscaloosa. This stone was discovered in 1817 by Thomas Scales.”

Near fifty years ago when I was a child I knew Mr. Scales well. He then had the appearance of a very old and feeble man. Briefly speaking the particulars of his finding this stone were as follows:

“In the above mentioned year, 1817, Mr. Scales and his father were clearing land on the west bank of Big Creek, and they worked up to an embankment several feet high which ran from the creek to the river. On top of the embankment was growing a large poplar tree and at the foot of this tree a sand stone two feet long and one foot wide was standing partly embedded in the ground. On the stone was carved this inscription: “HISPAN ET IND REX 1232.”

I can never forget her words – they left an indelible impression on me -Click to read a true story of how Hitler took over Germany.

Some other early visitors to the spot now occupied by our city came through here in June, 1771. An account of these visitors to this place can be found in Milbourn’s “Pioneers, Preachers and People of the Mississippi”, page 222. And a more elaborate account can be found in Pickett’s History of Alabama, reprint page 355. An account is given of a number of people coming from Natchez, across the state of Mississippi, and then through parts of Alabama. The account continues and says: “They next made the Warrior at Tuscaloosa Falls, which they crossed by alternately wading and swimming from rock to rock.” 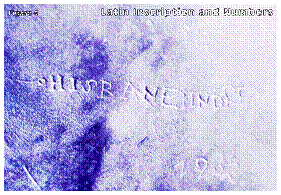 Among the people who were in the expedition are mentioned a doctor named Dwight and his wife, also two sisters and three brothers named Lyman. These seven people are all whose names are given. But there were a number of others along. This was near the closing days of the Revolutionary War. These people were very early visitors to Tuscaloosa and Northport, in fact, the first of whom I had ever heard of visiting the spot where Northport now stands.

The Alabama Stone was sent to the American Antequarian Society, Worcester, Mass., May 1, 1824, by Mr. Silas Dinsmore, of Mobile. – (Editor of Alabama Historical Quarterly)

The information below is from the American Antequarian Society, Worcester, Mass.

After study, some scientists from the American Antequarian Society believe that it was left by De Soto according to this report:

I can but agree with him that everything points to the fact that the Alabama Stone was left where it was found by Mr. Thomas Scales while clearing his land, viz. six miles from Tuscaloosa, down Warrior river (originally Tuscaloosa river, meaning in Choctaw ‘Black Warrior’) by De Soto’s expedition. I think the clearly-cut 1232 cannot refer to a date. I have studied the matter very carefully and am convinced that De Soto crossed the Warrior river, not near Erie as Colonel Pickett, Judge Meek and others have conjectured, but just above the Indian town of Cabusto, marked now by the noted and fine Carthage, or Prince mounds. There De Soto fought his second severe battle, on what is now Alabama soil. The Indians (said by a Spanish writer to have been 8,000 warriors) disputed De Soto’s passage there some two or three weeks. De Soto meanwhile having two boats built ‘ 1^ leagues above Cabusto and one league out from river on El Monte ‘ or some high hills found there on the east side of Warrior river not for below Tuscaloosa. The Indians fought his men desperately when thej’ crossed about day-break, but all were safely across by sunset. De Soto’s men were then in danger. I hold that they hastily strengthened their camp on the west side by that earth-work extending from river to creek, which was the quickest way to protect a temporary camp. Then some Spanish soldiers roughly cut the Hispan et Ind Rey, and cut 1232 to indicate the number of leagues they estimated they had marched from Tampa Bay to that point—for those figures correspond with their estimate of their march until then.

A report of the American Antequarian Society in 1963 states that Alabama requested the return of the Alabama stone.

The Council at its last meeting voted to comply with the recent request of the Alabama State Department of Archives and History that we turn over to them the Alabama Stone, given to us in 1823, and described in our Proceedings of October, 1888. The State sent a jet plane to pick up this relic which the Alabama newspapers described as their Plymouth Rock.