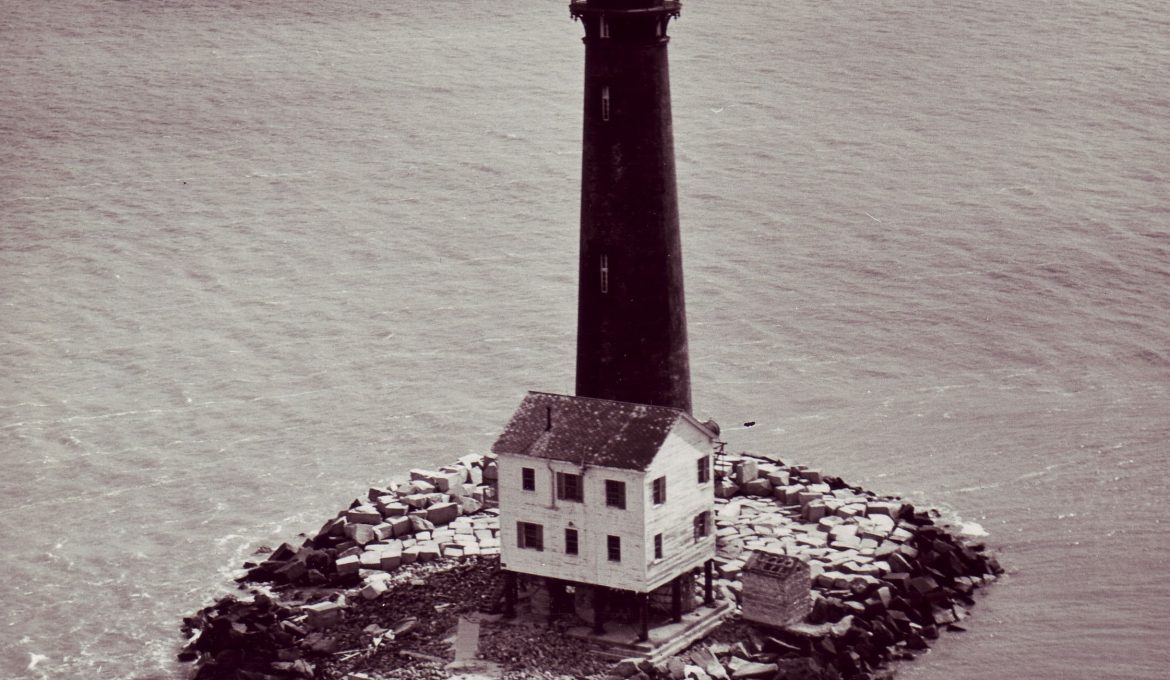 The United States Lighthouse Board was constituted by Act of Congress in 1852. The Secretary of Commerce and Labor is the ex-officio president. The board consists of two officers of the navy, two engineer officers of the army and two civilian scientific members, with two secretaries, one a naval officer, the other an officer of engineers in the army. The members are appointed by the president of the United States. The coastline of the States, with lakes and rivers and Porto Rico, is divided into 16 executive districts for purposes of administration. The various types of lighthouses comprise lighthouses and beacon lights, 1,333; light vessels in position, 53; light vessels for relief, 13; gas lighted buoys in position, 94; fog signals operated by steam or oil engines, 228; fog signals operated by clock work, etc., 205; sub-marine signals, 43; portlights 2,333; day or unlighted beacons, 1,157; bell buoys in position, 169; whistling buoys in position, 94; other buoys, 576; steam tenders, 51; constructional staff, 318; light keepers and light attendants, 3,137, officers and crews of light-vessels and tenders, 1,693.

Sand Island Lighthouse  is a decommissioned lighthouse located at the southernmost point of the state of Alabama (Public domain, Wikipedia) 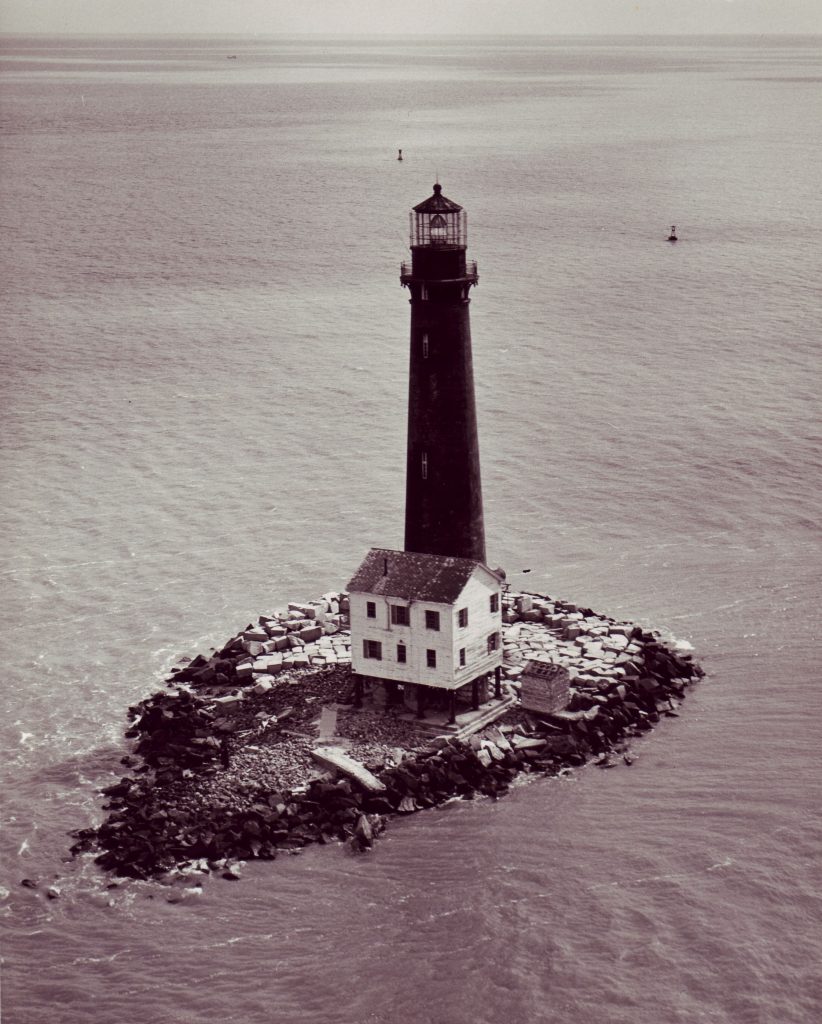 Approaching Mobile from seaward, the waterway is marked by lights, buoys, and other aids to navigation at the entrance of Mobile Bay and along the Mobile Ship Channel. Of these aids Sand Island Light is the first one picked up and is used in connection with two range rear lights for crossing the bar. Most of the lights and beacons originally established are gone.

Numerous changes have been made as necessity required and the buoys have often been shifted to mark the changing channels. Lights have been established and discontinued to meet the requirements of navigation. There are other minor lights, lighted and unlight buoys and day beacons marking this important waterway but only principal lights now in commission are herein described.

A lighthouse was built in 1838 on Sand Island, under the Act approved March 3, 1837, then a low lying island about three miles southerly of Mobile Point; replaced in 1858, under Act approved August 18, 1856, a white light was shown 152 feet above water from a brick tower, which was destroyed in the early sixties. A light was then temporarily shown from a small wooden tower until a permanent lighthouse was built and a light established in 1873, under the Acts approved March 2, 1867, March 3, 1871, and March 3, 1873. This was a second-order fixed white light, shown 131 feet above water from a conical brick tower painted black and located in the middle of the island about 700 feet from the site of the former tower, and is the structure standing today.

Near this new tower, a double, wooden, two-story, keepers’ dwelling was constructed. As the small island had been gradually washing away, the original dwelling was removed to a more secure location in 1893, but was taken down in 1902 and a new dwelling built on piles on the rocks near the tower. This dwelling was destroyed in the hurricane of 1906, and the Assistant Keeper and his wife were drowned. The keepers have since then resided in the tower itself.

Mobile Point Lighthouses prior to the American Civil War. Destroyed during the Battle of Mobile Bay (Public domain, US Coast Guard web site) 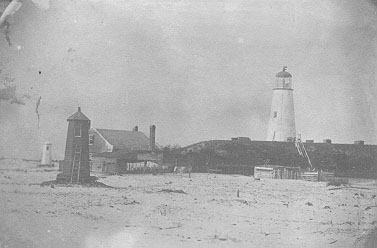 The original island has disappeared and the tower is now in the water surrounded by a mound of riprap or massive stones that have been placed at the base of the tower from time to time by the Lighthouse Service to protect it from the encroachment of the sea. In 1912 the oilwick lamp then in use was replaced by a modern incandescent oilvapor lamp and the light is now of 17,000 candlepower, visible 18 miles.

Further inside the entrance to the bay is another important aid to mariners, Mobile Point Light, established in 1822, and refitted In 1835 under the acts approved May 15, 1820, and March. 3, 1835. It was again refitted with illuminating apparatus in 1858.

During the Civil War, it was badly damaged and was rebuilt in 1873 under the Acts approved March 2, 1867, and March 3, 1871. The tower is still standing and consists of iron skeleton structure located on one of the bastions of Fort Morgan, and exhibits a fixed red light of 150 candlepower, 49 feet above the sea, and visible nine miles.

Prior to the dredging of the ship channel in Mobile Bay from its entrance to Mobile, the aids to navigation seem to have consisted of buoys entirely, as evidenced by appropriations made by Acts approved between that of May 18, 1826, and August 3, 1854. Immediately after the War of Secession steps were taken to mark the channel with lights, but nothing seems to have been accomplished until an appropriation of $19,000 was made by the Act approved March 3, 1883. under which a number of small lighted beacons were established along both sides of the then recently completed ship channel. Under this appropriation, a screw pile structure, known as Mobile Bay Light Station, was also established in December 1885, at the bend in the channel about 14 miles below Mobile. This structure is still standing, but at that time it exhibited a fixed white light varied by a red flash every 30 seconds from a fourth-order lens whose focal plane was 44 feet above water, and was provided with a fog bell struck by machinery. This system of lighting proving insufficient, two appropriations amounting in all to $60,000 were made by the Acts approved August 18, 1894, and March 2, 1895, under which a system of lighting was carried out which included the construction and erection of 16 cast iron beacons on wooden piles supporting posts from which lens lanterns showing fixed white lights were established.

Ten additional beacons were subsequently added to the system in 1902. In 1906 thirteen of the lights were changed from oil to acetylene. At present the system consists of 24 lighted beacons, including old Mobile Bay Light Station, using acetylene as illuminant.

During the year 1916, the Lighthouse Service established as additional markers 17 spar buoys midway between the lights on the westerly side of the channel and one at junction of this channel with the Cutoff Channel, also replaced the whistling buoys at the entrance channel with a large gas and whistling buoy showing a flashing light of high candlepower. The light has a flash of one second every ten seconds and the whistle is sounded by action of the sea. The following is quoted from the Buoy List, Eighth Lighthouse District, page 4:

“The following states bordering on the waters included in this list have passed laws providing penalties to be paid by persons interfering in any manner with the aids to navigation established and maintained by the United States, as follows: Florida, Revised Statutes of Florida, 1892; Alabama, Code of 1907, sections 4923 and 7870; Texas, Penal Code, 1895, article 789.”