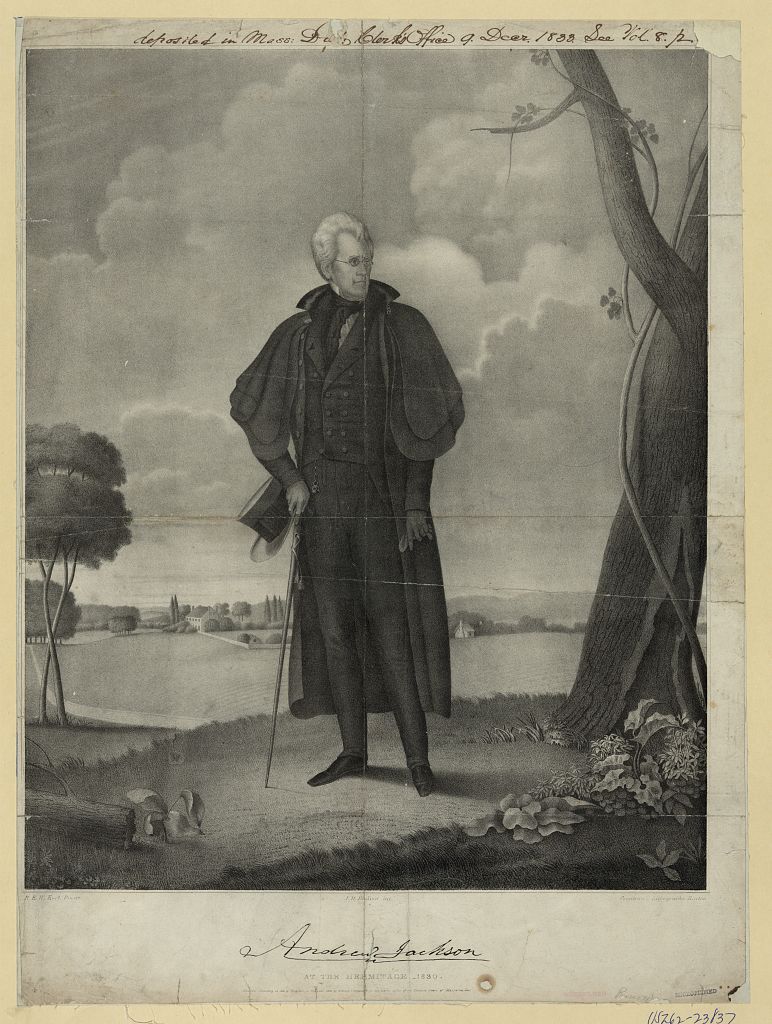 General Jackson continued to wait for supplies while camped at Fort Strother. General Cocke had been ordered to East Tennessee to procure supplies for the whole force and they never came. Men went into forests and shot game when possible but there was never enough food and a threat of a mutiny among his men.

In November, a friendly Native American arrived with word that the friendly Creek town of Talladega was in danger of being overwhelmed by over one thousand Red Stick warriors. The Native Americans at Talladega had refused to join the hostiles and in consequence they were attacked and had been driven into the stockade.

When General Jackson heard of the attack, even with an army badly in need of rations, he at once marched to its relief. On the morning of November 9th, his intrepid Tennesseans moved upon the enemy forces from the common center. The body of hostile Creeks were attempting to reduce what was known as Leslie’s Station. This was a trading post at the old Indian town of Talladega, situated on a hill about a quarter of a mile southwest of the big spring and near the present town of Talladega.

The trading post was named after Alexander L. Leslie, the half Native American son of Alexander F. Leslie, a Scotch-Indian countryman in the Creek nation. The station was occupied by seventeen white men and about one hundred and twenty friendly Creeks, under the leadership of Jim Fife and Chinnabee.

The Red Sticks fought bravely, and at first repulsed the militia brigade, but they in turn were beaten back by fresh troops. The Tennesseans, under Jackson and his courageous lieutenants, pressed steadily forward. The Red Sticks gave way and numbers escaped though Jackson’s lines. Many were pursued and shot down as they ran. The battle lasted scarcely more than an hour and a half.

For miles around, the woods were filled with dead and wounded warriors. Two hundred and ninety-nine Red Sticks were wounded on the battlefield proper, and there were doubtless many others that were not located. Jackson’s losses were fifteen killed and eighty wounded. The forces of General Jackson consisted of about two thousand men, infantry and mounted, while the Red Sticks had about one thousand. The garrison in the fort was thus relieved. Jackson’s dead were buried on the field.1

The hostile Creeks in that quarter had been routed with heavy loss, and the little band of beleaguered friendly Indians were released from their dangerous and trying situation; but Jackson’s army was hungry, and there was a prospect that actual starvation would presently overtake it. The little food that was found at Talladega was distributed among the men, sufficing to satisfy their immediate needs.

It was important that the troops should return with all possible haste to Fort Strother, which should not be left in its defenseless state a moment longer than was absolutely necessary; but an instantaneous beginning of the return march was out of the question. The men had begun their toilsome journey at midnight between the 7th and 8th of November, and had marched all day on the 8th and, after a few hours’ rest, had begun to march again a little after midnight, to go into battle early on the morning of the 9th . Now that the battle was done, they were utterly worn out, and needed rest. Accordingly, the army went into camp for the night, after they had buried their dead comrades. The next day the return march was begun, and on the 10th of November the weary army finally arrived at their encampment.

Luckily, the fort was unharmed, but it was still destitute of provisions, and for a time it was with great difficulty that Jackson prevented a mutiny among the troops, whose only food was the meagre supply gleaned from the surrounding wilderness.

1The Talladega chapter, Daughters of the American Revolution, have had the remains removed to the city cemetery, where they were re-interred, and a handsome monument erected in commemoration of their valor.