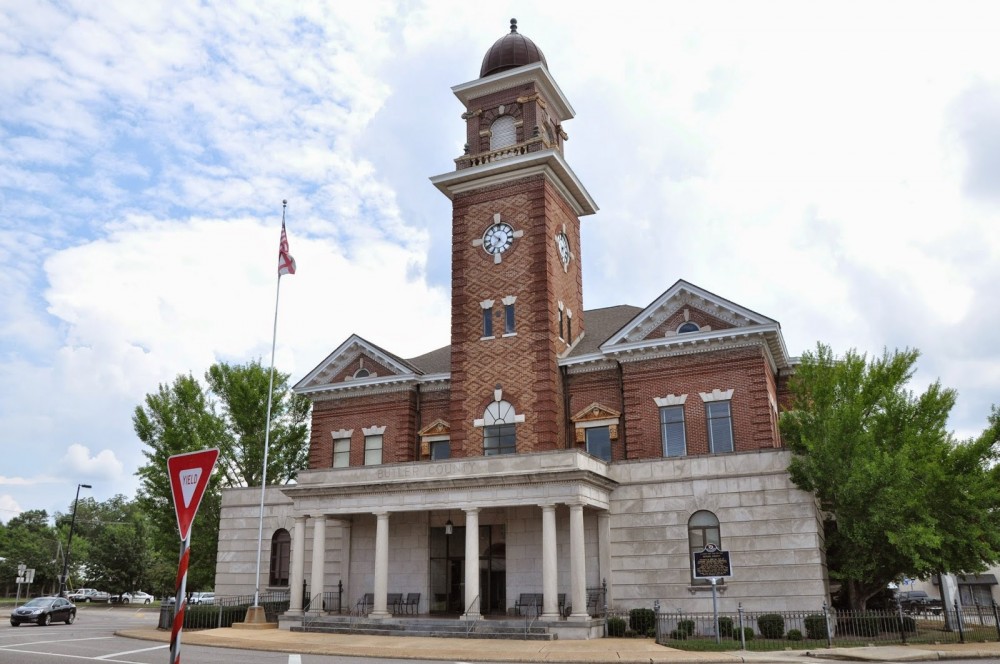 Butler County was created by the first session of the state legislature, December 13, 1819. Its territory was taken from Monroe and Conecuh counties, but was originally a part of the Creek Indian lands, ceded August 9, 1814. On the formation of Covington County, December 18, 1821, and Crenshaw, November 24, 1866, its area was reduced on the east.

The name of the county as originally proposed and which was reported in the bill was Fairfield, probably so given because of the large number of settlers, who had come from the upper portion of South Carolina. However, on final passage the name Butler was adopted, in honor of the brave and adventurous CAPT. WILLIAM BUTLER a soldier in the Indian Wars of 1813-14. He was one of the early settlers in the county, but soon after his arrival, he was killed by Creek Indians, and his body horribly mutilated, March 20, 1818.

The act creating the county named MICAJAH WADE, JOHN CARTER, SR., GEORGE HARRISON, HILARY HERBERT and TALIAFERRO LIVINGSTON as commissioners, “to fix on a suitable place for the seat of justice,” with power to purchase “not exceeding a fourth section of land” for the site chosen, and to erect a court house and jail. Acting under the authority of this act the commissioners named Fort Dale as the temporary seat of justice, pending a permanent location.

There the first court in the county was held. JUDGE ANDERSON CRENSHAW presiding. The next session of the legislature, December 7, 1820, authorized the commissioners to lay off the land they had secured, and to sell the lots. A subsequent act of December 15, 1821, appointed WARD TAYLOR and ISAAC COOK commissioners in place of CARTER and LIVINGSTON, “who have declined acting.”

Nine days later another act was passed, providing “that Buttsville shall be, and the same is hereby made the permanent seat of justice in and for the county of Butler,” and authorizing an “extra tax” levy of one-half the state tax for the building of a court-house and jail.

The town of Buttsville had been settled by enterprising South Carolinians in 1819 and named in honor of CAPT. SAMUEL BUTTS, a patriotic Georgian, who was killed at the battle of Calebee, January 27, 1814. The legislature, in response to the appeal of the South Carolinians changed the name to Greenville, December 28, 1822. On May 22, preceding, the town had been laid out, lots sold, and a frame court house erected. It was burned in 1852, and all county records lost, but it was at once rebuilt. In 1871 it was replaced by a brick building.

The first election precincts were fixed at “Fort Dale, or the most convenient house thereto,” and at the house of JESSE WOMACK, December 13, 1819; at the house of HARTWELL ELDER, December 7, 1820; at Buttsville (Greenville) December 15, 1820, and on the same date that at Fort Dale was discontinued.

South Central part of the State of Alabama

Butler County lies in the southcentral section of the state, about midway between the eastern and western boundaries. On its north are Lowndes and Wilcox, on the east Crenshaw, on the south Covington and Conecuh, and on the west Conecuh, Monroe and Wilcox counties. Its surface is quite varied, with a hilly or rolling topography. Limited areas of level land are however frequently found on the high plateaus and on the lowlands along the streams. Its irregular and broken topography are to be ascribed not so much to the presence of old established hills as to the occurrence of many deep gulleys, which the streams have eroded through the otherwise level plain. A ridge extends across the county in a southwesterly direction dividing it into two unequal parts. North of the ridge lies the northwestern section of the county, whose streams flow into the Alabama River.

The larger part lies to the southeast. The drainage of this area goes into rivers draining into Pensacola Bay. Between Wolf and Cedar creeks is another ridge 10 miles or more in length, of rough and rugged topography, ranging from 100 to 200 feet above the adjacent bottoms. The streams in the northwestern section of the county are Cedar, Wolf, Breastwork, and Pine Barren creeks. Those to the east and south of the ridge are Sepulga River, and Pigeon, Persimmon, Three Runs, Mill, Hall, Rocky, Panther, Duck, and Long creeks.

Mounds are to be found in different localities in the county. In almost all cases they are on the creeks and low places. Among these are: one on Cedar Creek below Sixteenth bridge; one above STEEN’S Ford near the old Creampot Springs; one on Cedar Creek; two on Long Creek in the BENNETT settlement; two on Pigeon Creek, on OVET B. WILSON’S plantation; several on the banks of Persimmon Creek; and one on the farm of H. C. SMITH one-fourth mile from the southeast corner of the county. Cultivation has reduced them practically to the level of the surrounding ground. In these mounds bones and personal belongings have been found, indicating their use as burial mounds.

The earliest settlers entered the county by way of the Federal Road. The first settler was JAMES K. BENSON, who built a house in Pine Flat in 1815. Very soon WILLIAM OGLESBY and JOHN DICKERSON settled with their families on the Federal Road, about three miles below where Fort Dale was afterwards erected. In the fall of 1816 THOMAS HILL and his two sons, REUBEN and JOSIAH HILL, WARREN A. THOMPSON, CAPTAIN JOHN H. WATTS, and BENJAMIN HILL, and his son ISAAC HILL, came from Georgia. These families brought their live stock, wagons, household effects, farming tools, with provisions to last for a year, and settled in the dense forests of Pine Flat.

In the fall and winter of 1817, many other emigrants arrived, some settling near Fort Dale, others on the headwaters of Cedar Creek. Among these settlers were the families of THOMAS GARY, COLONEL H. T. PERRY, JAMES D. K. GARRETT, and ANDREW JONES, JOHN MURPHY and ALPHEUS CARTER settled at Butler Springs.

Emigration was checked by the Indian disturbances in the early spring of 1818. When these troubles came to an end in the following October, there was a great increase of emigration to Southwest Alabama. In the closing months of 1818, and early in 1819, there came to the county the DUNKLIN, HERBERT, BOILING, GRAYDON, JUDGE, FARMER, HUTCHINSON, BURNETT, PICKENS, SMITH, CALDWELL, COOK, WATERS, JONES, DULANEY, DEMIOG, and Black families. Many settled near where Greenville was later to be located. Soon afterward there followed the families of CARTER, ARRINGTON, PEAVY, DONALDSON, JONES, MANNING, LEVINGSTON, CRENSHAW, WOMACK and others, who made homes for themselves in different parts of the county. Among some of the early settlers that came prior to or in the years immediately after 1821, were JAMES F. BARGANIER, AARON BUTLER, WILLIAM PORTERFIELD, DAVID ELDER, WEBSTER GILBERT, and JOHN BOILING.

There were no mills and gins in the county for several years after its first settlement. Corn was ground in a hand mill, or pounded into meal in a wooden mortar. Only enough cotton was raised for domestic purposes, and the seeds were separated from the lint by picking with the fingers. But the demand for mills and gins after some years brought about their erection.

In 1818 the county was the scene of troubles with refractory Creek Indians. On March 13 of that year they cruelly massacred WILLIAM OGLESBY, his four children, and MRS. ELIASTROUD.

CAPT. WILLIAM BUTLER located in the county in 1817. Shortly afterwards the Indians began to create disturbances by attacking the settlers, driving off stock, and in other ways making themselves a menace. Rude defenses had been erected, all in the northwestern section of the county, known as Fort Bibb, Fort Gary and Fort Dale. On the day referred to, a week after the OGLESBY massacre, WILLIAM P. GARDNER, DANIEL SHAW and JOHN HINSON, in company with CAPT. WILLIAM BUTLER and CAPT. JAMES SAFFOLD, set out from Fort Bibb to carry an important message to Fort Dale. They were well armed. They took the trail along Pine Barren Creek. About 4 miles away they were fired upon by a band of Indians under SAVANNAH JACK. GARDNER and SHAW were immediately killed. BUTLER and HINSON were wounded and thrown from their horses, but the latter regained his seat and hurried back to the fort. A detachment was sent out the next day by COL. SAM DALE. The dead had “been horribly mutilated.

Later in the spring the Indians stole several horses and cattle from the vicinity of Fort Bibb. They were pursued. WILLIAM COGBURN of the militia was killed. Because of fear of Indian attacks, the people remained in or near the forts during the greater part of 1818. During the fall of that year the Indians had either withdrawn or been driven from the region, and the families returned to their homes.

Excerpt from History of Alabama and Dictionary of Alabama Biography written by Thomas McAdory Owen, was published in 1921 by the S.J. Clarke Publishing Company.