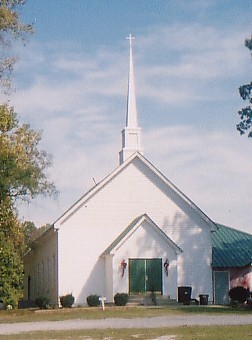 Transcribed from The Alabama Historical Quarterly, Vol. 04, No. 02, Summer Issue 1942. Brewer, a minister, and teacher, was a member of the Alabama House of Representatives from 1857 to 1859 and of the Alabama Senate from 1859 to 1863 – Photograph of Concord Baptist, Central Association, Coosa County, Alabama (Alabama Department of Archives and History)

The exact dates of the organization of the first churches cannot be given, but it was as early as 1834 that Smyrna, near Goodwater, was constituted. It is believed to be the oldest church of the county outside of Wetumpka. The Baptists were all united at this time, and the agitation on missions was just beginning. A convention is said to have been held with this church in 1835, and an association formed, but its name has not been preserved. In the split that came some years later, Smyrna went with the anti mission party, who call themselves “Primitive Baptists.” It has so remained, and still exists at the old location. There is a large cemetery attached. Bethel is thought to have been constituted not long after and still remains located in the edge of Brooksville. It also went with the Primitives. There is a large cemetery here.

Antioch west of Nixburg was constituted about the time of the other two. The Association is said to have met with it in 1837, when the feeling upon missions produced so much confusion, that Luke Haynie, a preacher among them, induced a dissolution. The church dissolved some years later. No other association was formed until 1845, when the Central came into existence, and later the, Primitives formed the Wetumpka Association.

Near this same time Shiloh was formed, some three miles north of Nixburg, and had a number of prominent families connected with it for some years. The first session of the Central Association was held and it was formed here in 1845. The strife on the mission question had grown in intensity, until fellowship was destroyed, and a separation became necessary.

Some churches as bodies were for missions, some for anti-missions; some were divided, and mutually withdrew from each other, the majority holding the property and church records, the others either forming new churches, or going to some neighboring church of affinity. Even families divided, husbands and wives, and parents and children not unfrequently (sic) going with different factions. William Salter and James P. Goggans remained with the missionaries, their wives went with the others.

A preacher of the missionary once came to Goggans’ seeking lodging, and made the plea to the madam saying, “I am on the Lord’s business.” She replied, “If the Lord has put his business in your hands I think he has made a very poor choice.”

James F. Edens was a member, minister, and for a time pastor of Shiloh, but went with the Primitives. John Bates then became pastor and after him Benj. H. Wilson. He called the meeting in October 1845 with Shiloh church that resulted in the formation of the Central Association which became by far the most influential and numerous religious body in the county.

Large Cemetery At The Old Location

Joseph Hill was a minister in Shiloh, who died a few years back having passed more than a hundred years of life, and last year Stephen D. Ray died over ninety who was in the constitution of the church. Obadiah Moore and David Radford were ministers, once members. The church has not been so strong since the war as before, and the population changed so that thirty years or more ago it changed its location, going several miles north. There was a large cemetery at the old location, and a good many of Coosa’s prominent citizens are buried there.

Those who took sides with the Primitives from Shiloh went into the organization of Fish Pond, which took its name from the Indian town. This has continued its existence, and has been a strong church. There has been kept up an annual singing by Mr. Albert Holloway for about fifty-eight years, on the first Sunday in May, It is the most noted gathering in all this region of country. The people come for miles in all directions, and bring their baskets of dinner, spending the day in singing, eating, and social enjoyment. The cemetery here is large.

Church Was Moved Near Brooksville

Mount Carmel was also one of the early churches, and sided with the Primitives. But little is known of it. Friendship church was in existence in 1846. It was between Sockapatoy and Bradford’s, and once had a strong membership, but was depleted by death and removals, until it dissolved in 1870. Patrick McKinney, Wm. Corbet, and Saml. Gray, with their families, were among its last members.

Harmoney was constituted about 1846 or 1847 in the eastern part of the county, several miles from Brooksville. For a long time John H. Colley, one of its members, was its pastor. He died at an advanced age just a few years since, and is buried in its cemetery.

Five entered the ministry from its membership, Benj. Timmerman, Y. D. Harrington, Joseph Norton, Calvin Swindall, and O. C. Swindall. Others have been ordained since the church was cut off into Elmore. There is a well kept cemetery attached. In 1871, and for two or more years, it had four deacons over eighty years old, Mr. Fielder, Norton, Timmerman, and Chas. Gregory.

Union church was one of the very early churches, and was in the constitution of the Association. It was located a mile above Central, until after the Central Institute had been established, when it was moved down to the village. This was a good church with a strong membership before the establishment of the school. Afterward it was very strong, so many persons of means and influence going there to educate their families. It once had seven ordained ministers members of it, Joseph Bankston, James Russell, Platt Stout, James Jeter, A. T. Holmes, B. T, Smith, and Bright Skipper. Joseph Bozeman, who died a few years since, the popular and beloved pastor of the first Baptist church at Meridian, began his religious life here. There are two cemeteries belonging to this church.

Mt. Gilead, several miles northeast of Central, was another one of the early churches. It is Primitive, and located in a pretty place. It has never been a strong church. It has a cemetery.

The time when Concord was constituted is not known. It joined the Central Association in 1848, but it existed before, that time. It was for a series of years one of the strong churches intellectually, financially, and numerically; and though it has lost in these particulars, it is still a good church. Sterling Speer was ordained here, and was a young growing minister in power, when cut off by death. The cemetery is large. Salem joined the association in 1848, but the writer is of opinion it had an earlier existence. It was not far from Hatchett Creek, and between Rockford and Weogufka. It was never a strong church, but had some fine members.

An Unfortunate Disturbance Split The Church

Poplar Springs was constituted in 1848, and grew rapidly, so that in a few years it had a larger membership than any other in the Association. Meetings of wonderful power used to be held, such as the writer has seldom seen elsewhere. For several years a number of the members had temporary houses built, and had meetings just after the order of Camp meetings. They usually had able pastors, until an unfortunate disturbance led to a split in the church which has never been entirely healed. Many of its influential members moved away and died. Rev. J. R. Steely, Hardy Jones, and J. M. Butler were members. The cemetery is large.

Mt. Zion was established about 1849, about eight miles northeast of Wetumpka. It was in a pretty belt of pine land. Rev. Joel Nichols and Robert Stewart were members. Nichols was baptized at Old Elam church, near Montgomery, in 1824. The church went down soon after the war.

There was, for a time from 1849, a Missionary Baptist church called Bethel, but its location and history are unknown to the writer.

Antioch church was constituted in 1849, about 12 miles nearly north of Wetumpka. It still exists, and has been a good church, and once had a strong membership m the days of the Rogers, Lawsons, Holifields, and Holtzclaws., There is a well-kept cemetery here. . .