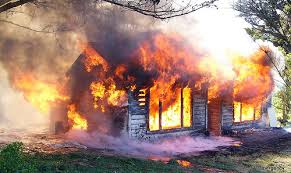 It was after eleven o’clock Tuesday night when the omnipresent and indispensable Mr. Arendell discovered smoke issuing from the southwest corner of the house, as he was returning home from Wyeth City. Judge Ayres and family were quickly aroused; by that time Mr. Earnest Woolley, passing the residence of Mr. O. D. Street, saw flames bursting from the house and the alarm was immediately given by the church bells and whistles.

In a few moments Guntersville poured out en masse, and many willing hands removed the furniture from the slowly burning house.

The fire must have originated in the flue of the room over the kitchen, but the first evidences of it were discovered in the corner of the room, above the ceiling. The night being very still, and the house magnificently built, plastured, and roofed with tin, caused the flames to be long in consummating their terrible work.

Mrs. Alford, who is staying at present with her daughter, Mrs. E. D. Moss, was not apprised of her loss until the following morning.

Nearly everything in the house was saved, though much of it in a badly damaged condition. The residence was insured for $1500, a small return for so valuable a house.