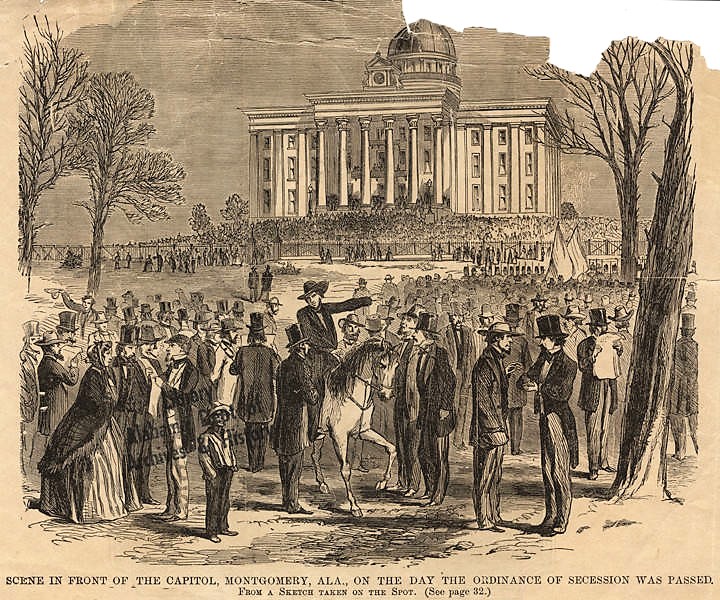 The convention met in the hall of the House of Representatives in the Capitol building on the day fixed for the assembling, and so keen was the interest that not a single one of the 100 delegates failed to answer to his name at the roll call.

Both sides on the night before the meeting claimed to have the majority, and to secure a harmonious organization it was agreed that one Representative from each side should go to the stand, on assembling, and put in nomination its candidate for Chairman of the convention. When the body gathered, however, the Unionists and the co-operationists, who had evidently caucussed, found out that they were in the minority and they quietly allowed the straight out secessionists to organize, by the election of William S. Phillips, of Dallas, as temporary president, and A. G. Horn, of Mobile, and S. D. Brewer, of Montgomery,’ as temporary secretaries. The opening prayer was by Rev. Basil Manly, a distinguished, divine of the Baptist church.

On the question of permanent organization the straight out secessionists nominated for President Wm. M. Brooks, of Perry, and the Unionists and co-operationists placed in nomination Robert Jemison, Jr., of Tuskaloosa. Ninety-eight votes were cast, the entire convention voting with the exception of the two candidates and it was found that Mr. Brooks received fifty-three votes and Mr. Jemison forty-five. Mr. Brooks was declared the duly elected president of the convention. This test vote showed the exact strength of each faction, and it was practically the vote on every material proposition, until it came to the adoption of the ordinance of secession, when several of the co-operationists seeing that opposition was futile, voted for the measure stating that they opposed to it, but as they proposed to abide by the action of the convention they would vote for the ordinance which they saw was certain of passage.

During the first day’s session Mr. Whatley, of Calhoun introduced a resolution, which, after setting out that the constitution of the United States had been violated, by the government, and by a majority of the Northern States in their separate legislative action, and that the “Black Republican” party had

elected Lincoln and Hamlin, on a platform which did not recognize property in slaves, resolved that the people of Alabama will not submit to be parties to the inauguration of Lincoln and Hamlin, as President and Vice President. This resolution, Mr. Whatley stated, was the test, and it was calculated to show exactly the position of each delegate on the great question at issue. He said that it was a well known fact that some of the delegates were co-operationists, and it was alleged that some of the delegates were submissionists who were in favor of even submitting to the election of Lincoln and Hamlin.

This resolution brought on the first heated discussion of the convention, many of the delegates objecting to the test being laid down in this manner. Speeches were made in opposition to the resolutions by some of the ablest debaters in the body, and equally eloquent and influential members spoke in support of their passage. Wm. L. Yancey, the great Southern orator, took a positive stand in favor of the resolutions, and declared that he had no feeling, or principle, in common with the delegates who might vote against their passage.

The strongest speech of the debate, made in opposition to the passage of the resolutions, was that of Jere Clemens, of Madison. In some of the speeches on the question, it had been said that a peaceable secession was possible, and would be the probable outcome of the movement. In the course of his speech in opposition to the test resolutions, Mr. Clemens said in reference to peaceable secession: “I am no believer in peaceable secession. I know it to be impossible. No liquid but blood has ever filled the baptismal font of nations. The rule is without an exception, and he has read the book of human nature to little purpose, who expects to see a nation born except in convulsions, or christened at any altar but that of the God of battles. So thinking, and so believing, I have felt that it was the duty of a patriot to conciliate — not to influence; to keep constantly before his eyes the one great duty of reconciling conflicting opinions, arid smoothing away existing asperities.”

The discussion of the resolutions occupied the entire session of the first day after the election of permanent officers and just before the hour of adjournment they were amended to read as follows: “Resolved, By the people of Alabama, in convention assembled, That the State of Alabama cannot and will not, submit to the administration of Lincoln and Hamlin as President and Vice President of the United States, upon the principles referred to in the preamble.” In this form the resolutions were passed unanimously.

The second day was largely devoted to hearing an address by Hon. A. P. Calhoun, the commissioner from South Carolina to Alabama. Numerous telegrams were received and read to the convention from different States of the South, and they were greeted with the utmost enthusiasm by the delegates and the spectators. Governor Moore reported to the convention the arrangements he had made with certain banks in the State to keep a supply of specie in the country. This was effected by getting the banks to suspend specie payments, and the Commercial Bank of Selma, the Central Bank of Montgomery and the Eastern Bank at Eufaula, responded to the Governor’s request to suspend such payments. The Bank of Mobile, The Southern Bank of Alabama and the Northern Bank at Huntsville, declined to suspend, but promised to aid the State, all in their power, in the matter of gathering and holding specie. He also informed the convention that by his orders Fort Morgan, Fort Gaines, and the United States Arsenal at Mount Vernon had been occupied by the troops of the State of Alabama, and that due notice of such occupation, had been sent to James Buchanan, President of the United States. The Governor also reported that he had received a request from the Governor of Florida for five hundred troops to aid the authorities of that State in holding the forts at the entrance to the harbor of Pensacola. The motion to order this body of troops to Pensacola provoked a heated debate, and was finally passed by a vote of 52 to 45.

PROPOSAL OF REFERENCE TO THE PEOPLE

Although the Unionists or co-operationists had been beaten on every proposition, they did not give up the fight, but made many stubborn resistances. At the session of the third day, Mr. Davis, of Madison, introduced the following resolution:

“Resolved, That whatever ordinance this convention may adopt in its final action, contemplating or providing for a severance of the State of Alabama from the Federal Government, ought to be submitted to the people for ratification or rejection.” This was the spirit of the co-operationists, and they believed if the people could have the opportunity to vote on the proposition, the State would remain in the Union, under conditions to be afterwards arranged. But the straight out secessionists were in the majority, and the proposition to refer to the people was laid on the table by a vote of 53 to 46.