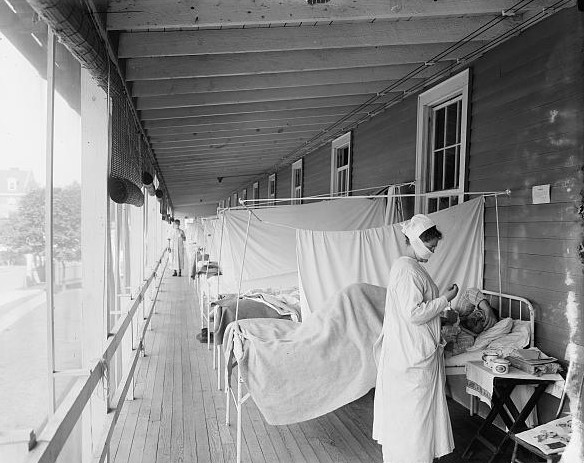 While World War I was taking place in 1918, a new influenza virus emerged throughout the world. The conditions of World War I helped it spread and it soon became a major public health crisis which caused at least 50 million deaths worldwide. Deaths in the United States were around 675,000. The first outbreaks in the United States occurred in March 1918 and rapidly grew. The illness was so severe that 195,000 Americans died in the month of October 1918. There was also a shortage of nurses at the time since many had been deployed to military camps and abroad.

In December 1918, another wave developed as people gathered together at the end of WWI. The American Public Health Association encouraged people not to gather, stagger opening and closing hours and walk to work instead of using public transport. Quarantine signs began to appear on the houses of many cities where the occupants were struck with the flu.

A 3rd wave occurred in the winter and spring of 1919. Some towns In tried to isolate themselves with quarantines, including towns in Alabama. The news article below reveals the Quarantine rules in Abbeville, Alabama. The outbreak finally subsided in the summer of 1919.

This book is a compilation of names and offices of many members of the Alabama Freemasons throughout the State of Alabama for the year 1926. It’s a great reference book for genealogists seeking their Alabama ancestors who were members of the Masonic Lodge. It does not contain biographical data, only names, lodges, and offices they held.