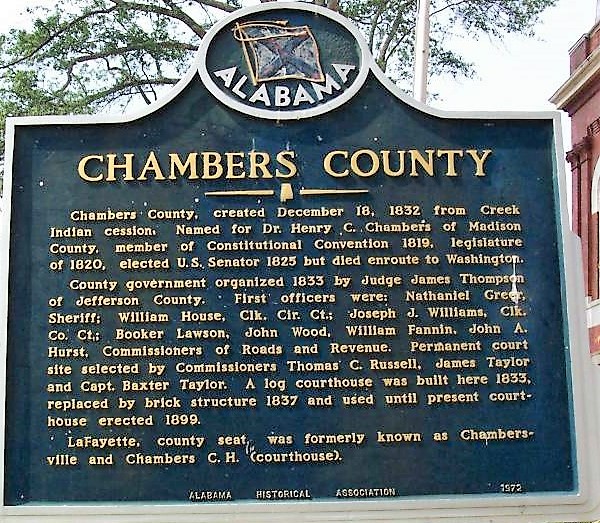 At the election held for the organization of Chambers County on the 4th of March, 1833, in addition to the county officers heretofore named, there were also elected three persons called Court House Commissioners, whose duty it was, under a special act of the Legislature, to select a suitable place for a permanent county site, and to superintend the erection of suitable public buildings for said county. The persons elected to that position were the Hon. Thomas C. Russell, James Taylor, and Baxter Taylor.

The Messrs. Taylor were good and clever citizens but men of very limited qualifications for transacting public business. But Judge Russell proved himself to be a man above the ordinary in good sound judgement and unyielding integrity in the faithful discharge of the trust committed to him.

But Judge Russell said to his colleagues, as public officers, it was theft duty to look to the future interest of the country, and not to be influenced by personal interest, in the discharge of their duties. He, therefore, proposed they should take a map of the county, which they had, and go to the center of the county, and the nearest eligible place to the center for such county site should be selected by them. That they did, and after careful examination of the county for several miles around, they selected the N.W. 14 of Sec. 13, in T. 22, of Range 26, as the place for the permanent county site for Chambers County. 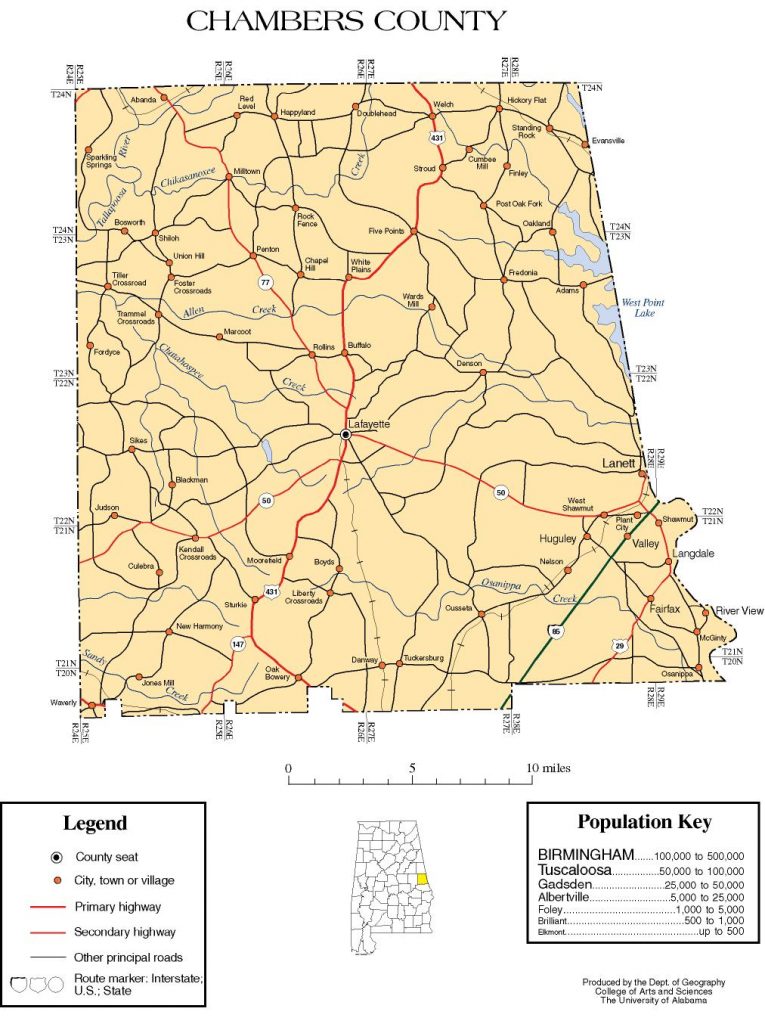 Not and Indian settlement was within three miles

The place selected was in the natural forest. Not even an Indian trail passed through the land selected, nor was there an Indian settlement in less than three miles of the place. But the place selected was within two miles of the center of the county, and as such its selection gave universal satisfaction. There was at that time an act of Congress authorizing the entry of 160 acres of land for county purposes in newly acquired territory, though the lands generally were not subject to entry under said act.

Said commissioners entered the above-described tract of land, and at an early day, directed the county Surveyor, Mr. Wm. McDonald, to lay off said tract of land into town lots, first laying off a public square in which to erect a court house.

This being done, a public sale of lots was had on the premises, on the 23rd of October, 1833. That sale was largely attended and lots sold for good prices. I cannot give the aggregate amount of this sale but it was sufficient to pay for the building of both the court house and jail for this county, without taxing the people one dollar for the erection of public buildings for Chambers County.

A short time after said sale of lots the Commissioners contracted with Messrs. Mitchell and Cameron, of LaGrange, Ga., to erect a court house and jail for said county. Said contractors performed their work satisfactorily, and as an evidence that they did good and faithful work, the buildings erected by them 55 years ago are still in use by the people for whom they were built, with the prospect of their lasting for many more years more.

The place selected for the public square in which the courthouse is erected is on the ridge which divides the waters that flow into the Chattahoochee from those that flow into the Tallapoosa river, and though the public square is comparatively level; yet it is sufficiently oval to cause the water that runs off on the west side of the courthouse to run into the Tallapoosa River, while that which runs off on the east side flows into the Chattahoochee River.

Soon after the selection of the permanent county site, said commissioners had a temporary courthouse built, which was built on the spot where the Probate and Clerk’s offices now stands. That house was about 20 feet square, was built of split pine logs and hewn so as to make them passably smooth. That house, for at least two years, and until the new court house was built, answered as a place for holding all courts, as well as a church for all denominations of Christians who desired to use it as such.

I would not do the Hon. T. C. Russell justice to pass him without giving him a further notice in these sketches. For to him is due the credit of making the selection for the county site, so important and which gave such general satisfaction that there was not a vote of the people called for, to ratify the selection made, nor did I ever hear a murmur of dissatisfaction. His oversight in the work of erecting the public buildings, deserve the commendation of all good citizens and is a worthy example for those who may hereafter be intrusted (sic) with like responsibilities.

The office of Sheriff having become vacant by the resignation of N. H. Greer, Elijah Holtzclaw, by executive appointment, filled the office until the next August election, when Willis Kellam, Esq., was elected Sheriff for a full term, after a heated contest, over Wm. George, only about thirty votes. Mr. Kellam served out his full term and made an excellent Sheriff. » The Hon. Leroy McCoy, who lived near Fredonia, was elected the next year to represent Chambers County in the Legislature and was the second representative the county ever had. The Hon. J. C. Keener, of Barbour, was our first Senator—Barbour, Russell, and Chambers counties forming our Senatorial District at that time.

1HON. EVAN GOODWIN RICHARDS, the author of a series of articles on Chambers County, published in the LaFayette Sun, during the year 1890, was a minister and lawyer. He was born August 26, 1807, at Northampton County, N. C., and died December 31, 1893, his last residence being LaFayette, Alabama. His father was a native of Wales, who settled in North Carolina in 1815 and removed to Madison County, Alabama. He went to the country schools of that County in 1830 and was licensed by the Methodist Church to preach. He located at LaFayette, that same year and was one of the chief promoters of the Opelika, Oxford and Guntersville Railroad, being its first President. He was also among the first to advocate the building of cotton factories in the South after the War Between the States. He was a Democrat and supported Stephen A. Douglas for the United States Presidency in 1860. Mr. Richards married Sarah Dickens Clark Webb, of Perry County, in 1835, and they were the parents of a large family of children.