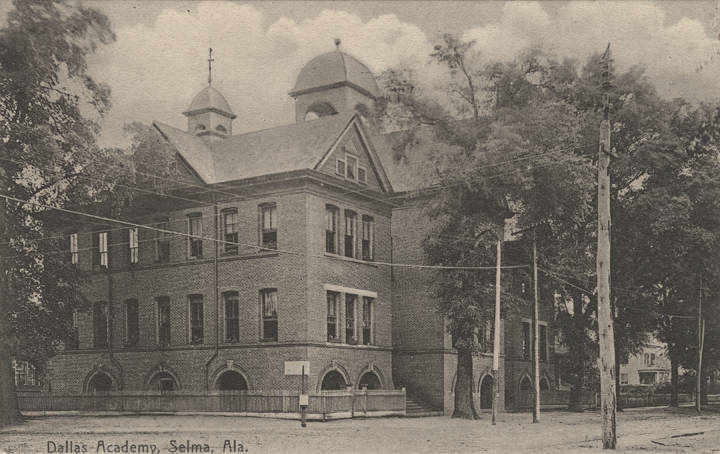 (Many schools throughout the state of Alabama were built by the Alabama Freemasons.  This was one of them)

Dallas academy, an educational institution, was chartered January 25, 1845, and maintained as a public high school until 1913, when it became the Selma High School, a part of the regular public school system.

Board of Trustees was self-perpetuating

In response to their appeal the Ladies Education Society Academy, which had been organized, was chartered January 30, 1839, by the legislature, and Nicholas Childers, Robert N. Philpot, J. W. Lapsley, Elias Parkman, John W. Jones, Jeremiah Pitman and Harris Brantley were named as trustees. The board of trustees was made self-perpetuating, and the property of the society was exempted from taxation.

In 1844 William Johnson donated to the society the lot on the northwest corner of Alabama and Donation Streets. Joining forces with the Masons, a two-story brick building was erected, the lower floor for a school, and the second for use as a Masonic lodge. Prof. Lucius B. Johnson, and his wife, Harriet Johnson, were engaged as teachers. The prosperity of the school was immediate, and soon outgrew the capacity of the entire building. The Masons disposed of their interest to the society.

The growth of the school was such that a reorganization of plans seemed advisable. This was effected through the repeal of the original charter, and the incorporation of the Dallas Male and Female Academy, “all the property real and personal, all the rights, Immunities and privileges” of the society being vested in a new board of trustees. The new board was made up of Philip J. Weaver, Thomas J. Frow, Wesley N. Plattenberg, John W. Jones, Peyton S. Graves, David A. Boyd, Edward W. Marks, William Seawell, George W. Gayle, Drewry Fair, and John Mitchell.

In addition to the usual corporate privileges, the board was given authority to appoint a “teacher or teachers to take charge of said academy, and prescribe such a course of academical instruction in said academy, with such rates of tuition and rules for the government of the pupils, as to them shall seem proper.” Power was given “to confer degrees, grant diplomas, and do all such other acts as other institutions of similar nature are by law authorized to do.” This board was also made self-perpetuating. 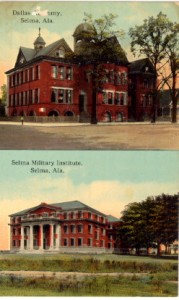 After the repeal of their charter, the Ladies Educational Society preserved its organization as a voluntary group of interested workers. It assisted in raising funds, both through entertainments and by subscriptions. Through its efforts Mr. Johnson made the gift of another lot, located at the corner of Alabama and Church Streets, the site of the present high school. The original brick building was used for boys, and the new building erected on the last named lot was for girls.

The Johnsons had come to Selma in 1842, and opened a male and female school in the old wooden Cumberland Presbyterian Church building on the corner of Church and Dallas Streets. Their second session was opened in the old wooden building used as a Presbyterian Church at the corner of Washington and Dallas Streets. In 1844 they took charge of the Dallas Academy, which was chartered in January of the next year.

The story of the academy from this date until its close in 1864 is given in the following extract from Hardy, History of Selma, p. 184:

“In 1845, the session was opened—the brick building on Alabama street being used for the male and the wooden building at the corner of Church and Selma streets used as the female department, Prof. Johnson controlling the male, and Mrs. Johnson the female department. Thus the school continued until 1850, all the time prospering, and giving the most complete satisfaction to the public.

There are hundreds of the best men and women in Alabama and other States, who were educated, and who graduated during this period of the Dallas Male and Female Academy who remember until this day Prof. L. B. Johnson and his venerable lady with the most delightful pleasure. In 1851 Mr. and Mrs. Johnson were called to take charge of the Camden Male and Female Academy at Camderi, Wilcox County, leaving Selma, which was generally regretted. After these popular teachers left the Dallas Academy, the institution gradually declined, and continued to do so until the fall of 1853, when Mr. and Mrs. Johnson returned to Selma and again took charge of the institution. 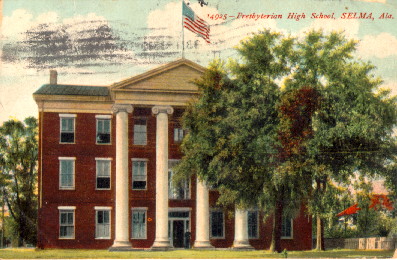 During their absence the building had become involved in debt, and the brick building for the male department had gone into the hands of Col. P. J. Weaver. In October, however, a female school was opened in the wooden building, the death of Prof. L. B. Johnson taking place on the 6th day of October, 1853, just six days after the opening of the school. Mrs. Johnson, notwithstanding her troubles, continued to conduct the school until the end of the session.

“Mrs. Johnson having given such general satisfaction, she was induced to again commence a session on the first day of October, 1854, and continued without interruption to manage and direct the Dallas Female Academy with unparalleled success until 1864, when, becoming in feeble health, she abandoned the school and no further efforts were made by the trustees to keep up a school until 1866.”

The temporary suspension in 1864 continued until 1866, when the academy was reopened by the trustees. The buildings were repaired, and Prof. W. B. Seals and wife, of Columbus, Georgia, were placed in charge. Prof. Seals resigned at the close of the session of 1868, finding the school wholly unremunerative.

About this time began the movement, resulting in the permanent organization of the public school system of the city of Selma. The citizens had organized to consider a donation from the Peabody fund, a gift of $2,000 to be available when Selma had raised a sum double that amount.

The necessary subscription having been raised, a school board was elected, consisting of Joseph R. John, Joseph Hardie, George O. Baker, George Peacock, Charles M. Shelley, A. G. Mabry, James M. Dedman, Edward Woods, John White, James W. Lapsley, and S. C. Pearce. The trustees of the Dallas Academy, after conferences with the school board, reorganized by the election of those just named to the position of trustees of the academy.

Plans for opening were then perfected, in which separate schools were provided for boys and girls, and a mixed school in East Selma. Capt. N. D. Cross was elected principal and superintendent in 1868. In 1869 the State board of education established the city of Selma as a separate school district. Small appropriations were made from the general public school fund. Capt. Cross continued in his position three years, declining a reelection. Prof. G. A. Woodward of Talladega was chosen as his successor, and in October, 1871, the schools opened as usual. Prof. Woodward served for eleven years, retiring in 1882. He was succeeded by Prof. Richard E. Hardaway, who died in 1907, while serving as superintendent. His successor was Miss Emily F. Ferguson, who held the position one year, and she in turn was succeeded by Prof. Arthur F. Harman in 1908.

Freemasons contributed to America and the state of Alabama through their patriotic service and philanthropic work since 1811, but little is known about their backgrounds. Utilizing the bonds of their fraternity, but without fanfare, the freemasons built schools, orphanages, nursing homes, provided for the sick and elderly, fought wars, and were an integral part in building the state of Alabama and our country. They were, simply put, ‘the epitome of good patriots and citizens