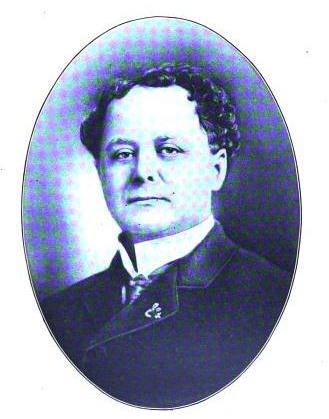 Basil Manly Allen was born December 20, 1858, in Carolina County, Virginia, the son of Rev. Littlebury Woodson and Harriett Ann (Martin) Allen. The Allen family came from England to America early in the eighteenth century and located in eastern Virginia. Mrs. Allen was also of English descent. Her ancestors were early settlers in the colony of Virginia. The Rev. Littlebury W. Allen was one of the founders of Richmond College and one of the board of directors.

Rev. Allen was pastor of the Walnut Street Baptist Church of Louisville at the outbreak of the War of Secession. Resigning his pastorate, he returned to Virginia and raised a regiment of which he was elected colonel. He served through the entire war, with the exception of ten months when he was held a prisoner at Johnson’s Island, and was a witness of the surrender at Appomattox. He was at one-time sergeant at arms of the lower house of Virginia legislature prior to the war. He was pastor of four churches at the time of his death which occurred in 1872. Rev. Allen’s wife died in 1865 so he received a “very thorough home education under the care of his eldest sister, Mrs. C. V. Collins, who practically raised him after the death of his mother.

Basil Manly Allen was graduated at the age of seventeen from the Agricultural College of Virginia with the highest grade in his class. Soon after, he commenced the study of law in the office of E. C. Moncure, who was later judge of the county court at Bowling Green, Va. Two years later, in 1878, he went to Hale County, Alabama where he continued his studies. He read in the law office of

Thomas R. Roulhac at Greensboro, Alabama and, in 1880, was admitted to the Hale County bar, commencing to practice there in 1881. He was elected a member of the commissioners’ court and also a justice of the peace. In January 1882, he moved to Birmingham where he practiced law. He was appointed justice of the peace there in March, 1882 and elected for a term of four years in 1884.

Basil owned a plantation in the Canebrake region and was an extensive stockraiser. He was secretary of the Democratic committee; chancellor commander of Phoenix Lodge, No. 25, Knights of Pythias; was first exalted ruler of the Elks in Birmingham in 1888 became grand inner guard of the grand lodge of the United States, B. P. O. E. He was a member of the I. O. O. F. and of the I. O. R. M. While district deputy of the Elks, he established lodges at Selma, Anniston and Montgomery. He was a member of Phi Kappa Alpha Epsilon fraternity.

Where Do I Start?: HINTS and TIPS for BEGINNING GENEALOGISTS with ONLINE RESOURCES  is filled with Hints and Tips to begin your family genealogy research and acquire Genealogy information. In this book, you will find, many on-line resources, how to do court house research, where to find birth, death, social security records free on-line, and 81 questions to ask when interviewing elderly relatives. The Tips on How to break down the proverbial ‘Brick Wall’ and Free ON-LINE resources will help even the experienced genealogists