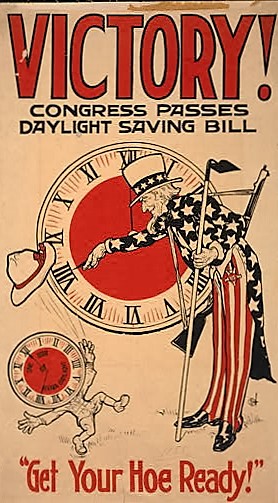 Daylight Savings Time has been embroiled in controversy since Benjamin Franklin first proposed the concept. The plan was formally adopted in the U.S. in 1918 in an effort to conserve fuel needed to produce electric power.  After the war ended, the law was unpopular and ended in 1919, but it remained a local option and continued in many states. Here is what many Alabamians thought about it in 1940 after Governor Dixon of Alabama adopted the practice for the State of Alabama in a proclamation.

(from The Decatur Daily)

In the press of war news, celebration plans and what-not, The Daily was about to overlook a compliment paid by The Tuscaloosa News to the cities which either refused daylight saving or, after having tried it, had the nerve to go back to the old time when they were dissatisfied with the new schedule.

Eastern cities were the source

Originally The News confessed it thought Alabama was simply aping some of the Eastern cities in ever trying the new time in the first place. 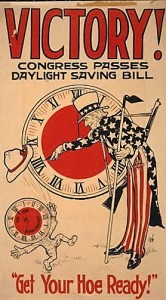 Some cities in Alabama ignored the change

The News later explained: towns—Mobile, Athens, Decatur and Greensboro—had abandoned daylight saving time, we overlooked a fifth—the thriving little city of Hartselle up in Morgan County. By a vote of 439 to 61, Hartselle said last week that it wanted no more of the phony hours.

Discussing daylight time, and the way some of the towns have gone back to the old system, C. M. Stanley remarks in The Alabama Journal “In spite of Governor Dixon’s proclamation, establishing the new time in the state and in spite of the fact that the change has been generally accepted as beneficial to the cities and larger towns, most of the rural sections have ignored the change entirely.

Less work on the farm

This is on the ground that it means one hour’s less work a day on the farm. It is claimed the farm hands are willing to quit an hour earlier in the afternoon but that they cannot be induced to start an hour earlier in the morning. Merchants and business men of the smaller towns who depend entirely on their farms trade naturally cling to the same kind of time the farmer uses.

Children would not go to bed

In our rust to ape the industrial East, we overlooked not only the farmers, but a large urban group—the mothers of young children. A lot of these youngsters have been in the habit of going to bed by 8 o’clock—a process not so difficult under the old time. But the problem of getting these youngsters to bed now by 8 o’clock, before it is even dark, is one which has baffled some of the ingenious mamas in Alabama. It has frazzled a lot of nerves.