(Excerpt from: The Great Southeast or Clarke County and its Surroundings, pub. 1882 by Rev. T. H. Ball) 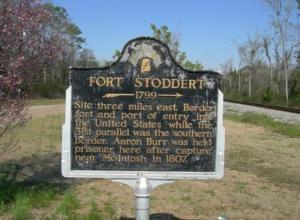 It was found that Natchez, or the new town of Washington a few miles east, was too far distant from St. Stephens for the convenient administration of justice, and the President was therefore authorized to appoint a Supreme Court Judge for the settlers along the Tombeckbee. (Tombigbee)

Hon. Harry Toulmin, born in England, having sought religious freedom in America, for four years President of Transylvania University at Lexington, and Secretary of State of Kentucky for eight years, a good scholar, fine writer, and well versed in law, was selected for the new position.

He at first settled near Fort Stoddart, then removed to the court house and named it Wakefield. He held his first court in 1804 or 1805. At this time there were some seven or eight hundred inhabitants on the Tensaw and the Alabama, and in the fork, besides those on the western side of the Tombeckbee. 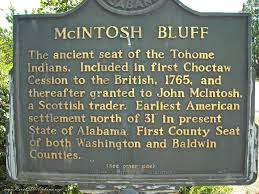 The next year Thomas Bassett, Edward Creighton, James Denby, Sr., and George Brewer, Jr., were appointed commissioners in regard to a town called Wakefield some twenty miles south of St. Stephens. This must have been the place so named by Judge Toulmin; and the distance and direction, as mentioned in the Mississippi Statutes, would locate this town near McIntosh’s Bluff. As at this place the first court was held, here probably a court house had been built. Pickett, however, has located Wakefield several miles north of the Bluff. Fort Stoddart was now a port of entry, where the Court of Admiralty was held.

Duties were extracted on merchandise brought in

In the fall of 1804, Captain Shaumberg had retired from the command, and was succeeded by Captain Schuyler of New York with eighty men. Edmund P. Gaines, Lieutenant, and Lieut. Reuben Chamberlain, paymaster. Congress made this Tombeckbee region a revenue district, calling it the district of Mobile. At Fort Stoddart duties were exacted upon merchandise brought in, and also required upon products sent out. These duties, the Spaniards at Mobile exacting duties also, bore heavily upon the settlers. As one illustration, in the year 1807 the Natchez planters in the western part of the territory paid for Kentucky flour four dollars a barrel, and the same flour cost the Tombeckbee planters sixteen dollars.

Peaceable possession of the lands was not obtained

In 1805 only an Indian trail led from the distant Oconee river to Lake Tensaw. This wide extent of country was held by the Muscogee or Creek Indians. The Georgia colony do not seem to have extended their settlements west of the Oconee river, and after the Revolution in 1783 and 1786 the State of Georgia vainly endeavored by treaties to obtain peaceable possession of the lands east of a line extending from the union of the Ockmulgee and Oconee to the St. Mary’s river, including the islands and harbors of that southern coast. Peaceable possession of these lands was not obtained until the treaty was made by President Washington at New York with Colonel McGillivray in 1790. West of the line named and of the Oconee river the Creek nation held possession.

But in the fall of 1805, thirty Creek chiefs and warriors, a delegation from their nation, being at Washington, the General Government obtained from them the right “of using a horse path through their country,” the chiefs agreeing to build bridges, or have ferries across the streams, and to open houses of entertainment for travellers.  A route of travel was thus secured for emigrants from Georgia into the wilds between the rivers.

And the same fall the Choctaw Indians ceded to the United States five millions of acres of their lands, beginning at the Cut Off, now the southern limit of Clarke, half way between the two rivers, running north along the water shed, to the Choctaw corner, which is on the present northern boundary of Clarke, and on or near the second range line east, then west to the Fulluctabuna Old Fields, or to the mouth of Fluctabuna Creek, then crossing the Tombeckbee, west to the Mississippi settlements, south to latitude 31° called Elliott’s line, and east to the Mobile river, and north to the Cut Off.

Thus a grant of land was obtained lying east of the Tombeckbee river where those pioneers, coming through the Creek nation, might settle and make homes without intruding upon Indian rights.

Dispute over who owned the land

But it appears that this strip of territory east of the Tombeckbee and extending half way to the Alabama, other claimants soon appeared. The Creek Indians claimed that it belonged to them, rather than to the Choctaws, and that the Choctaws had therefore no right to cede to the United States any lands east of the Tombeckbee. Instead of resorting to arms or to diplomacy the Creeks agreed to risk their claims on the success of a game of ball. Old settlers in Clarke refer to this game as a fact well authenticated and attested by eyewitnesses. John Scarborough who would now be about eighty-five years of age, if living, (1882) was one of those who witnessed it.

The contestants in this game laid aside most of their clothing. The Creeks are described as having been slim and straight in person, the Choctaws as shorter but active as cats. It is said that the first game was played by warriors against warriors, and that the Creeks being vanquished were dissatisfied. Then the Choctaws offered to let their squaws play against the Creek squaws. The offer was accepted. The women played. And again the Choctaws won. The Creeks now gave up their claims. The locality assigned for this singular game, by the early settlers is an old play-ground near the old site of Elam church, and near where the corner-post was finally driven that marked the boundary between Choctaw and Creek. In 1808 the line was surveyed from Hal’s Lake to the Choctaw corner.

Previous to this time, in the disputed region, the Choctaws and Creeks had both hunted and fought for the game. The surveyors were on the the ground. The Indians agreed to a line that should cross no water. One who has travelled in various directions across this disputed territory would suppose such a line very difficult to be traced. It is said that twenty chiefs of each party went along with their tomahawks to blaze the trees.

The whole space between the Alabama and Tombeckbee, and further north than Clarke county extends, even to the mouth of the Black Warrior, had been ceded by the Choctaws to the British, in a treaty made at Mobile, March 26, 1765. Now, for the last time, after the decisive game between the Indian squaws, this strip came into the possession of those who proposed to hold it against Creeks or any other claimants or invaders.

From Court Records of Washington county:

“Mississippi Territory. At a superior court held for the District of Washington at McIntosh Bluff on the fourth Monday in September, anno Dom. 1802. Present the right Honourable Seth Lewis, Esq., Chief Justice of the M. Territory.

Among these thirty-six are some that afterward became noted, and among them all there is but one having a middle name. On the first grand jury were “John Callier, foreman,” Tandy Walker, and Samuel Mims. “Nicholas Perkins Esq. was admitted to the practice of Attorney General of the Court.” Samuel Henry, Robert Knox, and Leonard D. Shaw, were admitted to practice as attorneys, each “having first produced a license and taken the oath prescribed by law.” The attorney general “produced his commission.” Some other names in the records of this session of court are James Caller, William Kimbro, Peter Malone, John Murrell, William Williams, and William Walton. The next term of this Superior Court was held at McIntosh Bluff in May, 1804. David Kerr Esq. presented his commission as Judge. Among the names for jurors are, William Buford, Edward Creighton, Thomas Bassett, John F. McGrew, Samuel McGee, Thomas Mercer, John Callier, James Caller, and John Dease. Other names in the records are, James McConnell, Nathaniel Christmas, Thomas Caller, and Young Gaines. Another term of this court was held at the courthouse in the town of Wakefield in September, 1805. Harry Toulmin Esq. was now Judge. In 1806 the name of Joseph Wheat appears. From the court records for 1808 it appears that the collector of customs at Fort Stoddart, then a port of entry, had occasion to seize considerable wine on different schooners. Then as now men would evade if possible the laws concerning intoxicating drinks. In the court records of Washington county under date of Tuesday, Sept. 22, 1818, is this item: “John Gayle having taken an oath to support the Constitution of the United States, and also the oath as Attorney and Counsellor at Law, he is permitted to practice in this Court.” He afterward became the seventh governor of Alabama.

This story and more can be found in the book: ALABAMA FOOTPRINTS Exploration: Lost & Forgotten Stories (Volume 1) ,  a collection of lost and forgotten stories about the people who discovered and initially settled in Alabama.