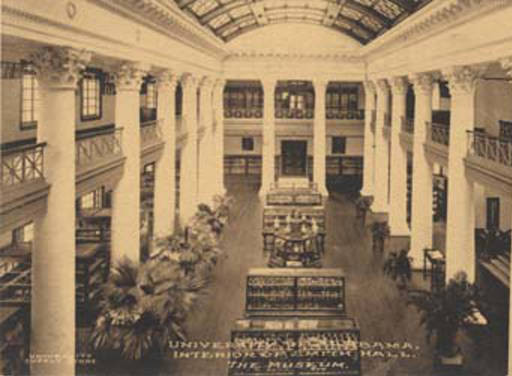 (In June, 1903, correspondence was conducted between Mr. E.N. C. Snow, of Tuscaloosa and Dr.James T. Murfee, Commandant, Alabama Corps of Cadets at the University, 1862-1865 with the view of establishing the fact that the University cadets were in action as Confederates during the war period. 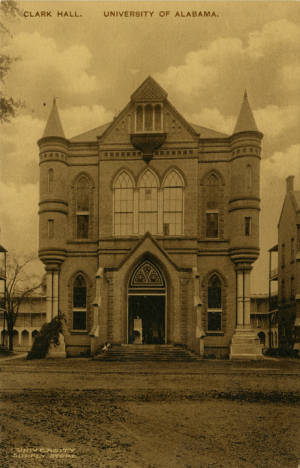 Clark Hall at University of Alabama around 1900

Wanted to bestow honors on the Cadet veterans

The inquiry was made not only with a view to establishing an historical fact but also probably in the interest of securing such honors and benefits as the State was bestowing upon its Confederate veterans. Many of the students did not remain at the University to get their diplomas but this recognition was given them by their Alma Mater at a later date. The law also required proof of Confederate service before pensions could be granted to claimants.

Mr. Snow entered the University in 1864 as a cadet on the staff of Col. Murfee of Liddell’s Brigade, C. S. Army and was later 1st Lieutenant, Company B, of that same outfit. At the end of the War Between the States he resumed his studies at the University where he graduated and became a successful merchant in his native city, Tuscaloosa. He had other business and civic connections and was highly esteemed as a man and citizen.

Col. Murfee was a professor of mathematics

Col. Murfee, a native of Virginia and distinguished educator both in Alabama and his native State was a professor of mathematics at the University of Alabama from 1860 to 1862 and from the latter date to the end of the war was Commandant of the Cadets with the rank of Colonel of the Alabama troops. He entered the active service in 1863 as a Lieutenant-Colonel of the 41st Alabama Regiment and participated in the engagement which took place at Tuscaloosa, April 3, 1865 as Commander of the State Cadets.

In 1871 he became President of Howard College which was then located at Marion but later removed to Birmingham. In 1887 he founded the Marion Military Institute and after his death his son, the late Hobson Owen Murfee succeeded him as President. Later another son, Col. Walter Lee Murfee became President. 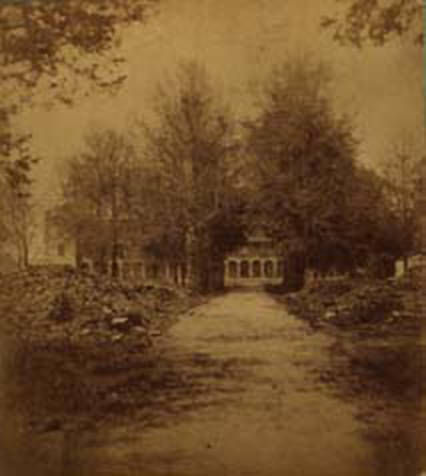 Your letter of the 23 came this morning; and I take pleasure in numbering your questions and in putting the answers after each:

(1) Were you in command of the Alabama Corps of Cadets during the Civil War?

(2) In your judgment was that Corps in the service of the Confederate States?

Yes: from the beginning of the Civil War until the end.

(3) Were their services in the field more than once offered to President Davis by Col. L. C. Garland?

Col. L. C. Garland was president of the University of Alabama and Commander-in-chief of the Alabama Corps of Cadets. He went to Richmond every year to tender the services of the Corps in the field to President Davis. President Davis persistently declined to take the corps of cadets from their camp of instructions at Tuscaloosa, where drill masters and officers were being prepared for the Confederate army. President Davis said that the services at Tuscaloosa, in training officers for the army, and in readiness to meet any raid into the state, were far more important to the Confederacy than service in a body in the field.

(4) Were the cadets not sent out in detachments, on several occasions, to drill troops and when sent did they render acceptable service to the Confederate Army?

Yes: this was the service that President Davis regarded as so important; for these detachments of instructors taught and disciplined all the Alabama troops and when the regiments were ready for the field, cadets went with them to fill offices to which they had been elected by the troops, serving as adjutants, captains, lieutenants, and sergeants; and one (Sanders) rose to the rank of general.

(5)During the summer of 1864 was not the Corps of Cadets ordered into regular service, and did they not as a part of Liddells brigade, render efficient service at Blue Mountain at Pollard, and at Blakely?

Yes: they served in Liddell’s brigade, received rations and transportation from the Confederate government just as other Confederate troops. And when the corps was ordered back to Tuscaloosa for instruction in the fall of 1864, one company remained in the brigade and did heroic service in the engagement at Blakely in 1865.

(6) Was the Corps not under fire on several occasions, and did the cadets, to your knowledge, ever show any other spirit than one of bravey (sic) and patriotism?

Yes, they were under fire on several occasions; and their discharge of duty in camp and their bravery on the field of battle was conspicuous and received the praises of the Confederates and the Federals whom they opposed.

(7)During this term of service did you regard the Corps of Cadet as State troops or as a part of the Army of the Confederate States?

They were not only State troops but they were apart of the Army of the Confederacy, being the order President Davis given through the governor of Alabama.

As soon as I heard that the raiders had entered Alabama, I supposed that they would approach Tuscaloosa from the north side of the Warrior River. Hence I earnestly petitioned Maj. Hardcastle to allow the corps of cadets to defend the bridge. He persistently refused and ordered us to picket the Huntsville road east of the university and the town, saying that the enemy would approach that way in his opinion. The only guard he put at the bridge was a squad of five or six composed of boys and old men; and put them in charge of the only piece of artillery we had, and which he had borrowed from us.

About one o’clock on the night of April the third, or rather the morning of the. fourth, a friend on a horse rode rapidly to the university and informed us that the federals had possession of the town in large force. Notwithstanding the disparity in numbers and armament, the corps of cadets was formed within a few minutes, double-quicked to town, the distance of a mile, and drove the Federals out after an engagement in which several cadets and Captain J. H. Murfee were wounded. It was reported to us afterward that three or four federals were killed in the engagement.

After holding the Federals at the river crossing for some time, and learning from a paroled prisoner that it would be impossible for us to hold our position after daylight because the Federals were 2,000 strong and armed with repeating rifles, we retired to the university, secured knapsacks and provisions, and took up position three miles from the university on the east side of hurricane creek, determined to defend that line should the federals approach. The following night we began our march to Marion where we expected to meet Forrest’s command.

After remaining in Marion a few clays, we learned of the disaster to the Confederate Army and the cadets were furloughed to return home, each carrying his arms with him. The foregoing statements show that every member of the Alabama Corps of Cadets was a Confederate soldier, displaying the highest virtue in camp and in field; and therefore every one is entitled to all the honor of such soldiers, and their descendants to a share in their glory.