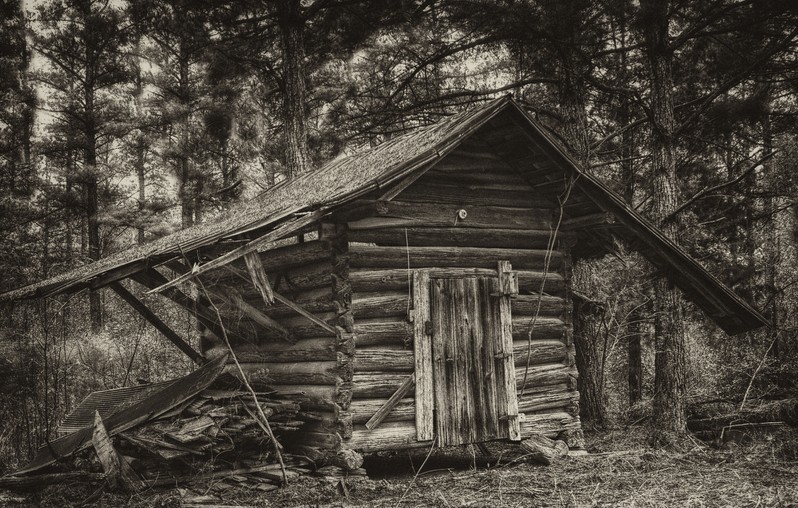 My first entrance in Tuskaloosa (Tuscaloosa) County was about the last of February 1830. It was what I then thought to be about the end of the long wagon journey from South Carolina. We came down the old Huntsville road from Elyton.

Elyton was the first town I ever saw in Alabama. It was there I saw the first Stage Coach I had ever seen. To me it was rather a big sight to see one man holding the reins of four horses, and they nearly at full speed and the driver cracking his long whip at every jump. I said I thought that we were at our journeys end, but I was mistaken. We came down to about opposite the Asylum. 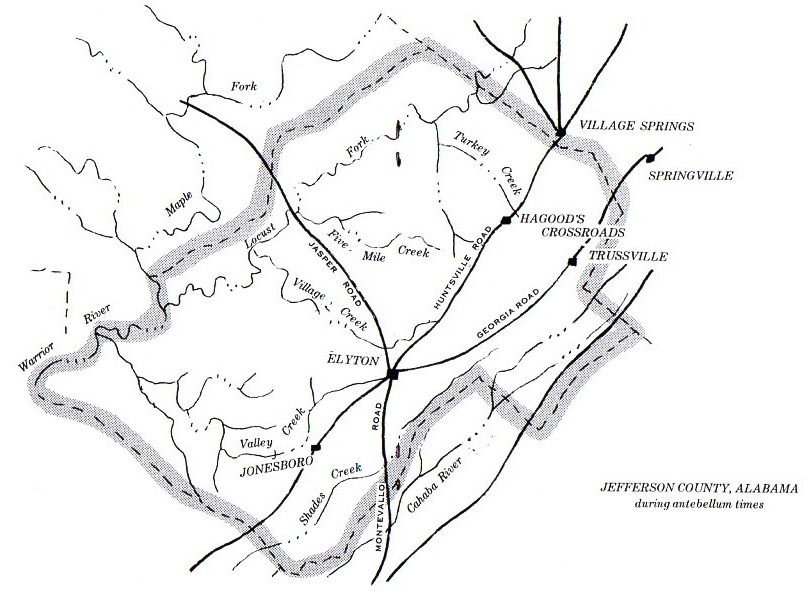 There my father had the wagon stopped, and he and mother and my two oldest brothers talked for nearly an hour. I well remember how impatient I was to get to see the ‘Big Town’. But after a long talk, the wagon was turned around in the road and we took the back track for some eighteen miles, then turning to the right and finally on the ninth day of March, we passed up about twenty miles north of Selma.

That year under all the circumstances may be said to have been a prosperous one. But never will I forget the complete break down of mother, when we drove up to the very poor apology for a cabin in which we were to live that year. She had been used to the comforts of life, and being in feeble health, the contrast secured more than she could bear, and to use a common phrase, she just let go. But the kind old gentleman from whom father had rented some land, came to the cabin, at once took in the situation, and spoke words of kindness and encouragement to mother; told her there was a better time coming, and for her not to give way.

The old gentleman’s cropper soon came up with what was then considered a full outfit of carpenter’s tools for a farmer, to-wit: a hand saw, auger and draw knife. He told mother that he would show her how to make an Alabama bedstead.

A few heart pine rails, and some old boards filled up the timber bill, and in a very short time he had improvised a bedstead standing on one leg in each corner of the back end of the cabin, and mother put up her beds. By this time the genuine kindness and pleasant remarks of the man, uncultivated as they were, had produced a happy change in mother’s feelings, and I don’t think that I ever saw her in after life, come so near giving up again.

I said under all the circumstances, that was a prosperous year. Two of my brothers hired out during the crop season, and in that way bought us corn to feed our horses and some cows to give us milk during the year.—While my oldest brother and myself—I was in my thirteenth year—and my little sister, who was just four years to a day younger than me, and the little brother next to her. These two children could work a row about as fast as I could, and the three of us would have been considered about one good hand.

This force, with the aid of the two hired out brothers, one week during the first chopping out, and a few days at the wind up of the season, we made about one hundred and fifty bushels of corn, some fifty dozen of oats, a good crop of sweet potatoes, and nine bales of cotton, averaging 470 pounds to the bale. I used to tell this story to some of the agricultural philosophers before the war, who insisted that white people could not make cotton.

At the end of that year we moved to Fayette county, passing through Tuskaloosa county on the way. I had never before seen so large a town as Tuskaloosa. 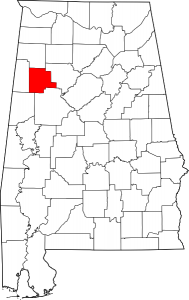 We got to the city on Saturday evening, a very cold evening in the first week in January. The river was then crossed only by means of the ordinary ferry boat, and from the crowd on the bank, it looked like it would be late in the night before we could get over. But owing to the earnest entreaties of Col. Johnson, who knew my father, and the kindness of old uncle Joe Cleveland, who gave us his turn in crossing, we got over in good time. These acts of kindness, boy as I was, made a deep impression upon my mind, and I have since remembered them with pleasure.

We spent that Saturday night in the celebrated little town of Kentuck. On the next morning, I heard the ringing of the first church bell, I had ever heard. If the reader should be curious to know something more of the locality, appearance and character of Kentuck, let him just imagine a low, or rather a squatty looking frame building, right on top of the river bank, just opposite Dodson’s Ware house, with a long piaza in front. A little store in front of that almost in the road. A cotton shed ware-house with post planted in the ground. On the opposite side of the road, at the place now covered by Dodson’s Warehouse and a small shed store room of rough lumber at the north side of the warehouse, over the door of which was the sign, “Charles Snow & Go., Cash Store,” he will have a very correct view of what was then known as Kentuck. These three places represented the commerce of that side of the river. The whole place did not extend fifty yards from the river. 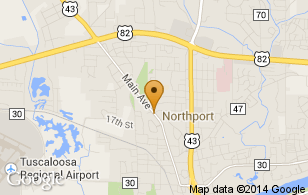 Nearly all of what is now the town of North Port, particularly the lower parts, was a dense canebrake. There was a small cabin at the forks of the road where the store of T. J. Foster now stands, the most attractive feature of which to me was a pet bear chained in the yard. This last place was settled by the father of our very worthy citizen, Mr. W. L. Christian. He is the only man that I know of to be now living who had lived on that site of the river at the time.

The building first mentioned was erected by John Chism, ostensibly as a Hotel; but in truth it was a gambling Hell, and was the centre of attraction in the place.

The character of ‘Kentuck’ was very notorious. It was known as a place of great disturbance, and principally as a gambling den. The misguided countryman who would allow himself to be drawn into its coils very generally found out that the old saw of ‘the more you lay down the less you pick up was true.

In fact the place was a Kentuck. But nearly all who resorted there for the purpose of plucking the unsuspecting bird really lived in Tuskaloosa, so that Kentuck furnished the rendivous, but Tuskaloosa in the main supplied the actors. And this feature was kept up long after the name of Kentuck was thrown off and that of North Port was assumed. But as the place grew up, matters changed in this respect. North Port furnished her full share of such characters and Tuskaloosa simply furnished her part of the supply. North Port and Kentuck together has one piece of history that scarcely has it parallel. It is this.—Within the corporate limits of the little town, three generations of the same family have been killed.

About the year 1835 North Port began to move away from the river. There had been a goodly number of stores erected and all close down to the river, and by this time there was getting to be a very nice population filling up the place. The effort to move up the road met with very strong opposition. The old tavern at the river struggled hard to hold its supremacy. But it would not do, the town would go up the road.

The large frame hotel building, the Globe, that was erected on the street, where Mrs. Maxwell’s residence now is, was too attractive in appearance for the old place. In 1836, there was an effort made to check the upward tendency of the place by building Carraway’s Tavern. On the northwest corner of what is now Mrs. Maxwell’s patch lot, and subsequently Chism’s Hotel, on the present site of Mr. Comorford’s residence. But go up, the town would, in spite of all these efforts, and by 1837 the business part of the town had planted itself where it now stands. There was an effort made to carry it still further up the street but it failed. 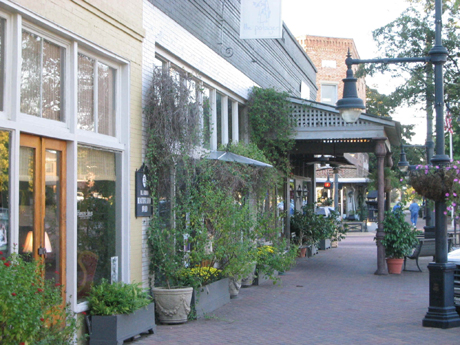 The first Post Office in North Port was called “North Tuskaloosa,” and I have never been able to understand why the Incorporators of the town should have changed its name from ‘North Tuskaloosa’ to ‘North Port.’ If I lived in the town to-day I would favor the changing of its name to North Tuskaloosa, for the simple reason, that name would give the place a Locality that would be much more extensively known.

The Post Office was discontinued in 1840, for what cause I never knew,—but in l841 the office was re-established by the name of Nort Port, and Jesse VanHoose was appointed Post Master, and I being a clerk in the store became a Deputy or Assistant.

But I will close this number. I will probably recur to the place again, after” getting through with the representative men of the county.