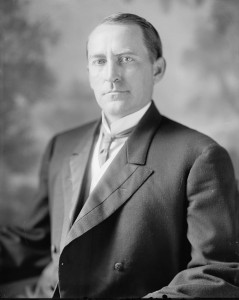 He was a member of the university’s first football team in 1892 and graduated, A. B., June, 1893; captain, Co. C, Cadet corps, and winner of the trustees’ oratorical prize. He at once entered the law department of Georgetown university, at Washington, D. C, from which he graduated in 1895. being president of the class, an honor borne likewise by his brother, John H. Bankhead, Jr.

1892 University of Alabama football team. William was number nine in the photograph below 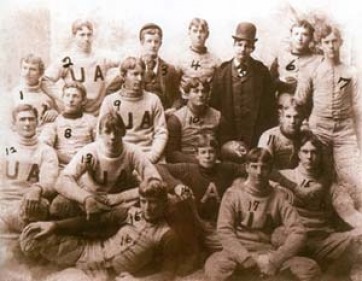 He graduated in 1892 and then, at his father’s request, attended Georgetown University’s law school and graduated in 1895. Bankhead briefly pursued an acting career in Boston, but a forbidding letter from his mother on the eve of his first rehearsal aborted his aspiration. Bankhead traveled to New York to practice law but quickly returned to Alabama, where he joined his brother’s firm.

He served as Huntsville, Alabama’s city attorney and as solicitor (prosecutor) of the 14th judicial circuit of Alabama.

William Brockman Bankhead served as U. S. Representative from Alabama and Speaker of the House. He was a prominent supporter of President Franklin Roosevelt’s New Deal of pro-labor union legislation. Besides his father and brother serving in government, William’s nephew Walter Will Bankhead was a U. S. Representative.

The William B. Bankhead National Forest is named in his honor. His home in Jasper has been renovated to house the Walker Area Community Foundation’s “Bankhead House and Heritage Center”, a history museum and arts venue.