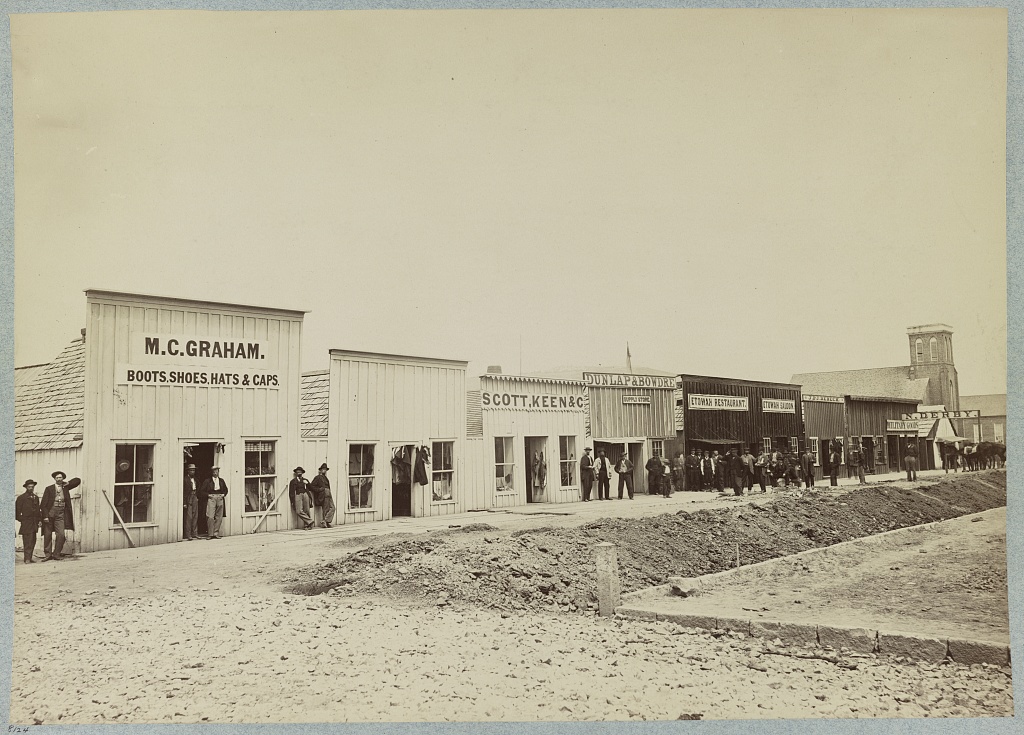 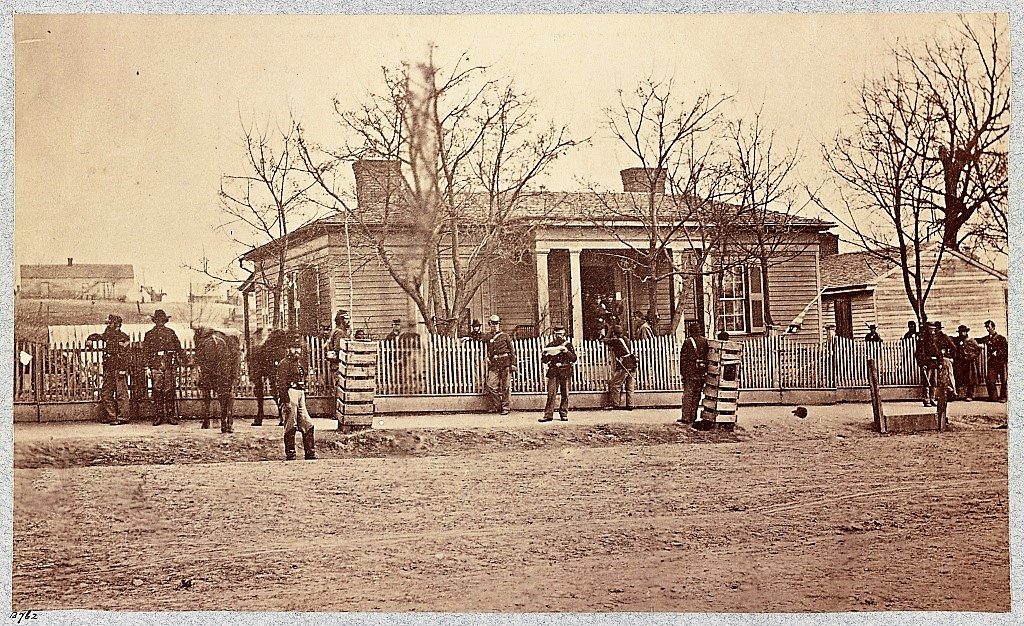 Francis M. “Franc” Paul established the Chattanooga Daily Rebel in August 1862, after the town’s two newspapers had merged, then suspended publication earlier that year. “The Rebel was one of only a few Tennessee Confederate newspapers that remained in circulation throughout the war. 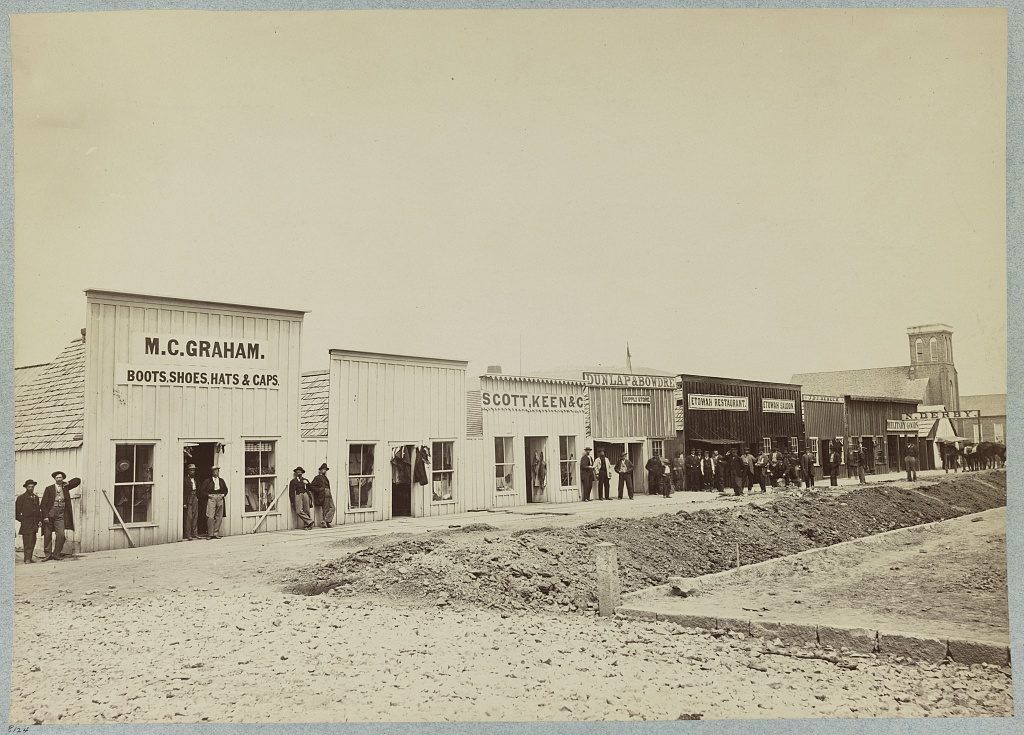 Sutler’s Row Photograph shows men standing in front of a row of stores on a commercial street in Chattanooga ca. 1861 (Library of Congress)

In its attempt to stay ahead of the Union Army, the Rebel was forced to move from town to town and soon earned the nickname the “Rebel on Wheels.” Over the course of the war, the paper was published in Chattanooga; Marietta and Griffin, Georgia (as the Daily Chattanooga Rebel) in 1864-65; and, finally, Selma, Alabama, (once again as the Chattanooga Daily Rebel) in 1865.”

“Federal troops eventually caught up with the Rebel in Selma, in early April 1865. The troops occupied the offices while the Rebel’s staff was held at the stockade. A few days later, as the troops left the town, they destroyed the Rebel’s presses and type, and the building was set alight. However, a small hand press survived the destruction and a few last copies of the Rebel were published before it permanently ceased on April 27, 1865.”

One sheet was evidently published on April 25, 1865, after Lincoln was assassinated earlier that month and the excerpt below reveals some confusion about what actually was taking place in other parts of the country.

Persons arriving here with late papers of any sort will confer a great favor by giving us the use of them.

The news which we published in our extra of yesterday evening, and which we republish in our issue of this morning for the reason that it was issued so late in the evening that many of our readers did not get it, may prove to be the most important intelligence we have received during the war.

An armistice has been agreed upon between the commanding Generals for the purpose of a final settlement. God grant that such may be the result. This is the first general armistice that has been agreed upon during the war, and it must have been agreed to from the most important reasons. There can be no doubt of the fact of this agreement, for it comes through sources which cannot be doubted. Gen. Beauregard, Gen. Cobb and Governor Watts cannot be suspected of at trick of this kind to deceive the public, and we are therefore bound to believe that the armistice is a fact. Taking it theretofore granted that a suspension of hostilities has been agreed upon we are permitted to argue from that fact.

What were the reasons for this armistice and by which party was it suggested? The presumption is that it was asked for by the yankee commander as we shall attempt to show, and granted by our commander in the hope and expectation that the cessation of hostilities might possibly result in the establishment of peace and the recognition of our independence.

We firmly believe that this armistice was the result of the assassination of Lincoln and Seward. The dispatches communicating the information are dated on the 19th. Lincoln and Seward were killed on the night of the 13th. It would have taken at least four days to have brought the news to Sherman’s head-quarters from the the morning after the assassination, which would have brought it up to the 18th. On the 19th our dispatch announcing the armistice are dated. It is likely that the authorities at Washington were panic struck upon the assassination of Lincoln and Seward, and in their fright, with the news of the event which they sent immediately to the armies they directed them if possible to procure a cessation of hostilities, in the expectation that a revolution had been inaugurated in the United States and that they might be compelled to withdraw their armies from the South to sustain their own government.

We do not believe as the extra unofficially states, that the armistice was the result of two great victories achieved by Lee. We have no doubt that the fight at Petersburg was very disastrous to the enemy. Their loss must have been immense, and is estimated by Gen. Lee, who is seldom mistaken, at forty to sixty thousand. But it is certain that in that battle they broke our lines and compelled us to evacuate Richmond. We doubt whether Lee had a subsequent fight with them. That he surrendered with a small portion of his men to save the balance of his army we have just as little doubt. It is not worth while to deceive ourselves. Let us keep our eyes open. The junction of the greater portion of Lee’s army with that of Joe Johnston makes Johnson formidable. The death of Lincoln and Seward has produced a panic among the United States authorities and induced them to ask for a cessation of hostilities. This pauce may allow the tempers of men to cool and perhaps result in a treaty of peace. We may now hope for the best. We think that the sun of our independence will soon appear.

The armistice will put a stop to the raiding propensities of Gen. Wilson. He will of course be compelled to halt whenever the official news of the stoppage of hostilities meets him if it is in a swamp where the mud and water is up to his ears, and we hope that it will meet him in some such place. It would have suited us very well if he had been stopped by something or somebody before he got to Selma and knocked our office into “pi” and the city into a heap of ruins. But luck was against us and so was that devil’s imp called Bull Wilson, and consequently up the spout we went.

. . . Up to the time of going to press no telegraphic dispatches had been received. Should any come to hand this evening we will issue them in an extra without delay.

An Armistice agreed upon and Hostilities Suspended

The following dispatches explain themselves. – They were received by Gov. Watts, at Montgomery yesterday.

Head-quarters Post, Eufaula, Ala., April 21, 1865. Received at these Head-quarters at 2 o’clock a.m. by special messenger, Col. H. R. McCay, A. D. C., of Gov. Brown, of Ga., the following copy of a communication from Gen. Howell Cobb, to General Commanding United States Forces:

Head-quarters, Department of Tennessee and Georgia, Macon, Ga., April 20, 1865 – To the General Commanding United States Forces; General – I have just received from Gen. G. T. Beauregard, my immediate commander, a telegraphic dispatch of which the following is a copy:

Greensboro, 12th, via Columbia, 15th, via Augusta. – Ma. Lieu. Howell Cobb: Inform the General commanding the enemy’s forces in your front, that a truce for the purpose of a final settlement, was agreed upon yesterday between Gens. Johnson and Sherman, applicable to all the forces under their commands. A messenger to that effect from Gen. Sherman will be sent him as soon as practicable. The contending forces are to occupy their present position, forty-eight hours notice being given on resumption of hostilities.

My forces being a portion of Gen. Johnston’s command, I proceed at once to execute the terms of the armistice and have accordingly issued orders for carrying out the same. I will meet you at any intermediate point between our lines for making the necessary arrangements for a more perfect enforcement of the armistice on both sides.

This communication will be handed you by Brig. Gen. C. D. Anderson (faded ?), I am very respectfully your obedient servant.

Eufaula, April 21 – The news by our papers last night is that Lee has gained two immense victories, and that the armistice is based upon his victories. C. J. Pope

P. S. – His loss (Grant’s is stated at one hundred thousand)

. . . The State of Alabama, as we understand, is not in Gen. Johnston’s department or under his command, and is not therefore within the purview of the terms of the armistice. The gunboats are not therefore stopped from coming up the river if they desire to do so. It is to be hoped that their desire for adventure may not lead them in this direction.

. . . Will our contemporaries of the Mississippi Press do us the favor to forward their papers to us regularly. We have received scarcely an exchanges since our demolishment and are compiled to go it almost exclusively on “shape and talent.”

. . . We can hear of no Yankees approaching Selma from any direction. We suppose they all understand that the place has been plundered of everything valuable and that there is nothing worth their coming here for. Our poverty is not our protection.

. . . A reliable gentleman who arrived here from Montgomery this morning reports that there is a force of Yankees estimated at two regiments of infantry and one of cavalry, at Haynesville, Ala.