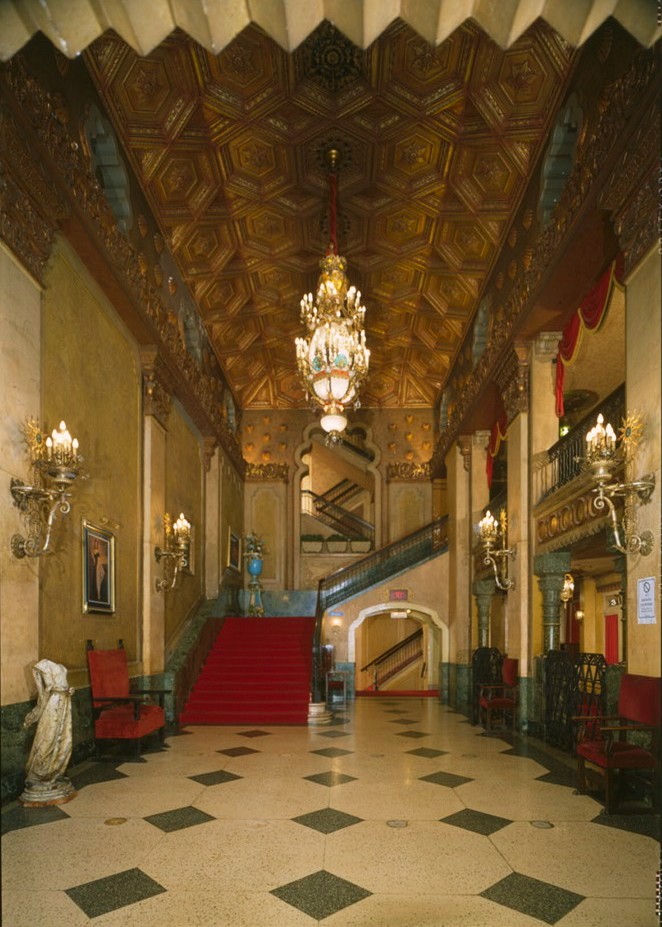 Today is the Alabama Theater’s birthday! The Alabama Theater opened on the night of Monday, December 26, 1927. Lane Carter, a writer for the Birmingham Age-Herald, wrote the following about the opening on the morning of the 27th of December, 1927. 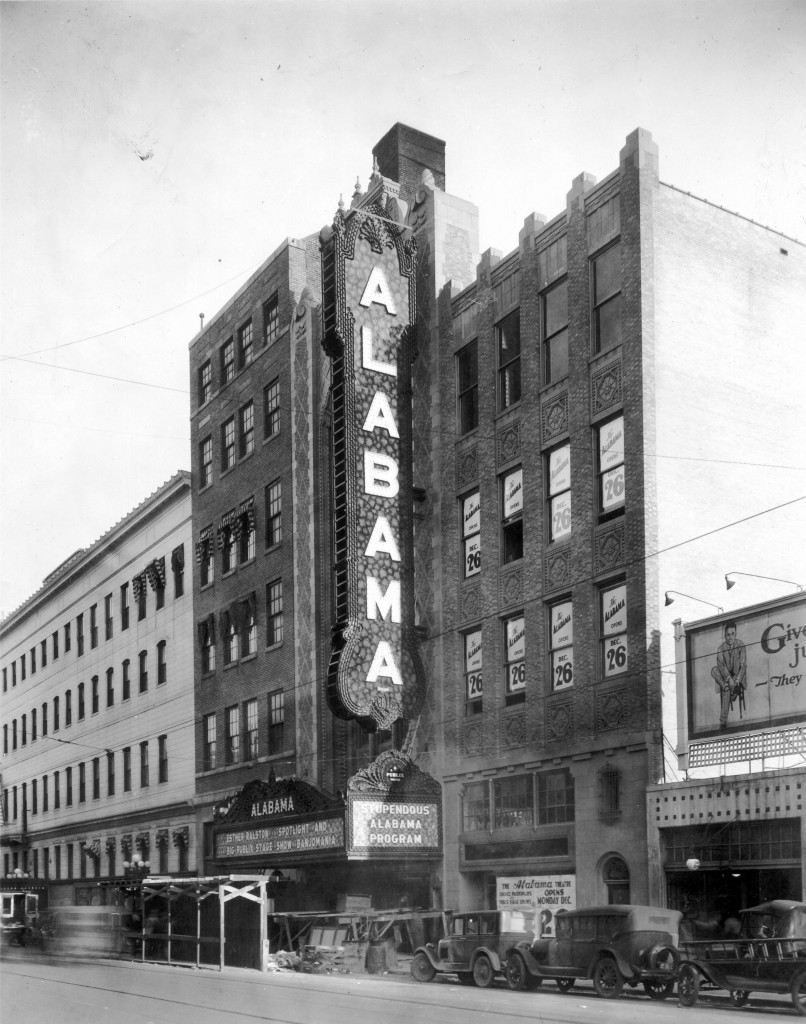 “A dream of color and music is the impression left after seeing the first presentation of the Alabama Theater, the newest addition to the extensive chain of Publix Theaters which opened its doors Monday to more than 11,000 eager amusement seekers…And with the fading of the first hues of that riotous dream comes the incontestable conviction that what had just transpired within that theater was one of the most complete programs of music, laughter, and pictures that has ever been presented in this section of the south.”

People waited long before the hour

The Alabama Theater was patterned after the Paramount Theater in New York. Another writer, Dolly Dalrymple from the Birmingham News described the opening as a “magnificent temple of pleasures.” She went on to report that “great masses of people assembled long before the hour for the opening and throngs viewed the handsome foyer with its myriads of mirrors, pictures, gorgeous furniture, handsome lighting effects, luxurious carpets and artistic decorations with eyes filled with delight and enthusiasm.” 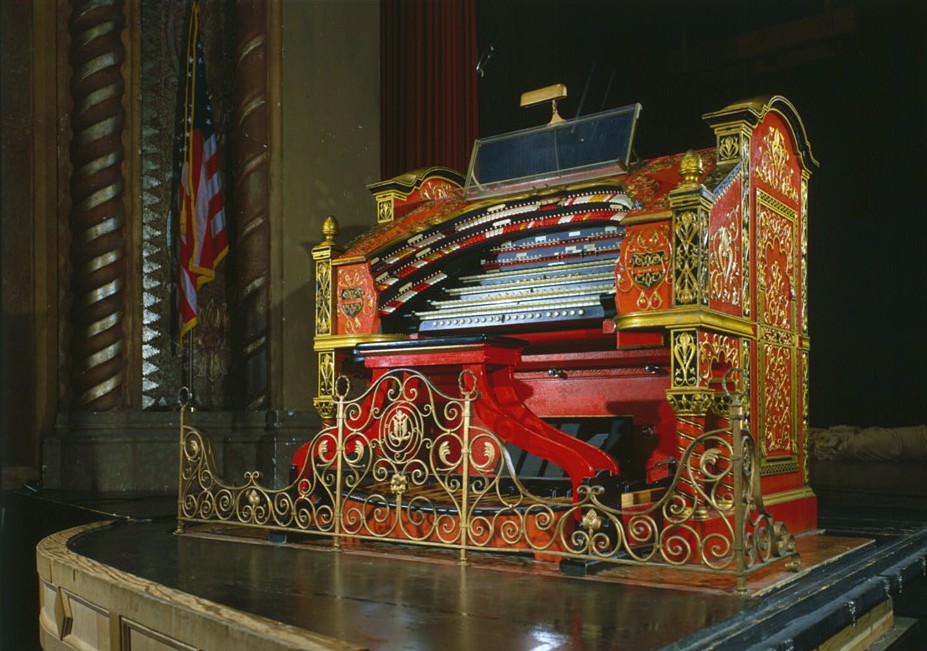 Since silent movies were the norm in the 1920’s, organ music provided background music and fourteen Birmingham Theaters advertised pipe organs as part of their program and the Alabama’s Mighty Wurlitzer was a star attraction.

“As the houselights slowly dimmed to blue running lights, the opening night audience got its first glimpse of the “Mighty Wurlitzer“ console slowly rising into view. The massively ornate red console featured four manuals and elaborate gold trim. Joe Alexander thrilled the audience with his rendition of Organs I Have Played,”

A full orchestra played at the opening and the feature film was Spotlight, starring Esther Ralston and Neil Hamilton. The orchestra opened the program with “A Grand Fantasia from Faust. A fantastic “stage production, entitled Banjomania supplemented the movie which opened with the Thompson sisters being lowered to the stage on the strings of immense banjos.” Morgan and Stone, banjoists offered played On a Dew-Dew-Dewy Day, and Margaret Ball and Richard (Limberlegs) Edwards performed their dances. The stage score ended with the singing of the Byron Sisters and the comical antics of Eddie Hill. Afterwards, the stage shows became a weekly feature at the Alabama Theater.

A contest was also conducted in connection with the opening. The Theater and Birmingham Post-Herald combined to award $20 to the first baby born on the day of the opening. The winner was Anita Jean Perryman. 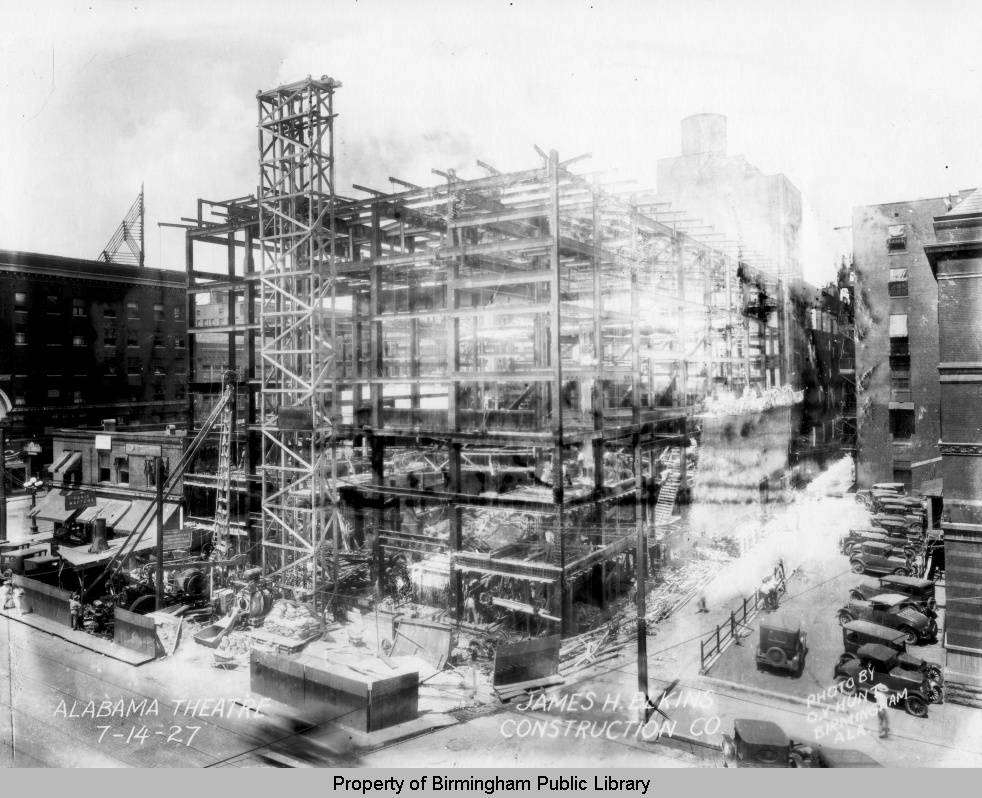 Early Events at the Alabama Theater

Of the theaters continuing to operate into the 1930’s, three maintained their theater organs — the Lowes Temple, the Ritz, and the Alabama. By the mid-1930s, only the Mighty Wurlizer remained.

In addition to films, the Alabama Theater offered live entertainment until 1929. Before coming to the Alabama, a unit show played the New Orleans Saenger Theatre, and when the show left Birmingham, it went to the Atlanta Paramount. 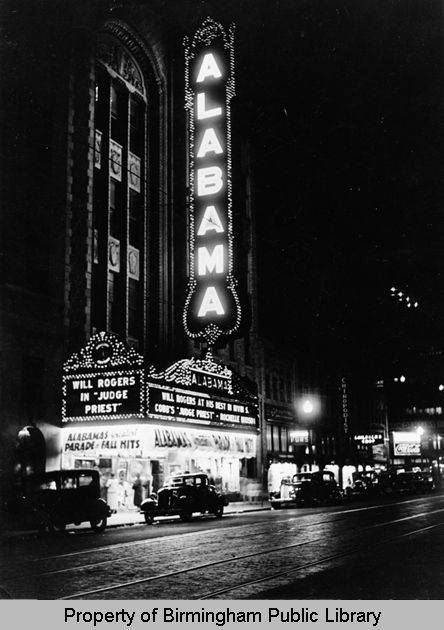 The Alabama has had several managers, events, shows and historic anniversaries over the, however, the anniversary on December 26, 1932, probably caused considerable excitement when a bomb exploded in the theater. Three women fainted and the house filled with smoke, but thankfully no one was injured. Charles Childress from Cullman was actually sitting in the seat under which the bomb had been placed and was temporarily blinded by the explosion. This was the 2nd bombing that years. The first bomb occurred on October 15th when four persons were slightly injured. 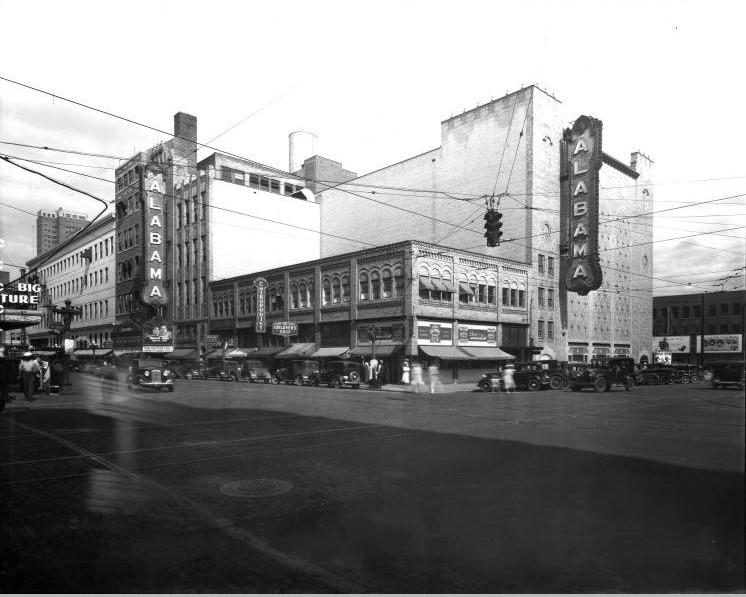 The week of September 25th to October 2nd was set aside for a big celebration in 1932 for Mickey Mouse’s 8th birthday. His birthday party took place at the Mickey Mouse Club on Saturday morning, September 26th with many shows and gifts for children to follow.

On July 24th, 1935, it was reported that the Alabama Theater was only one of two or three other theaters in the South to install earphones for the hard-of-hearing. With the advent of talking pictures, this group of people had not been able to enjoy cinema to the extent that was possible in the days of silent films. 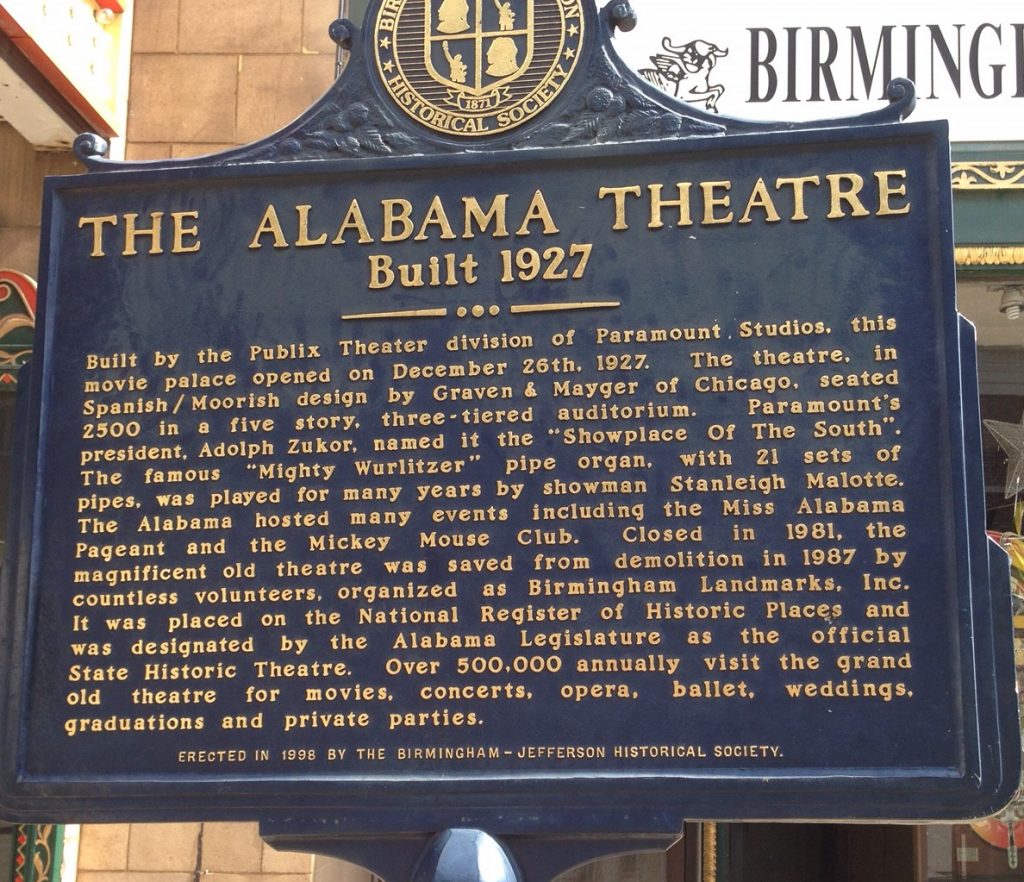 In the 1950s, Cliff Holman, known as Cousin Cliff, worked at the theater as host of the Saturday morning kiddies show known as the Flying G Savers Club sponsored by Guaranty Savings and Loan Association. Children would get a free ticket by putting 25 cents a week into a Guaranty savings account. 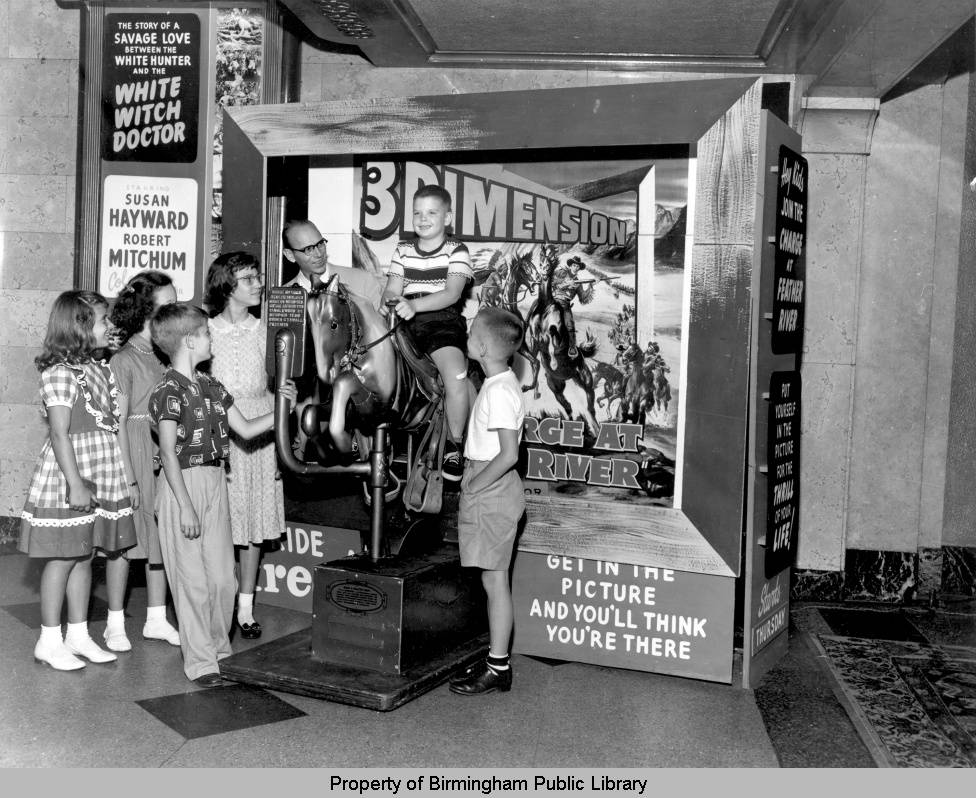 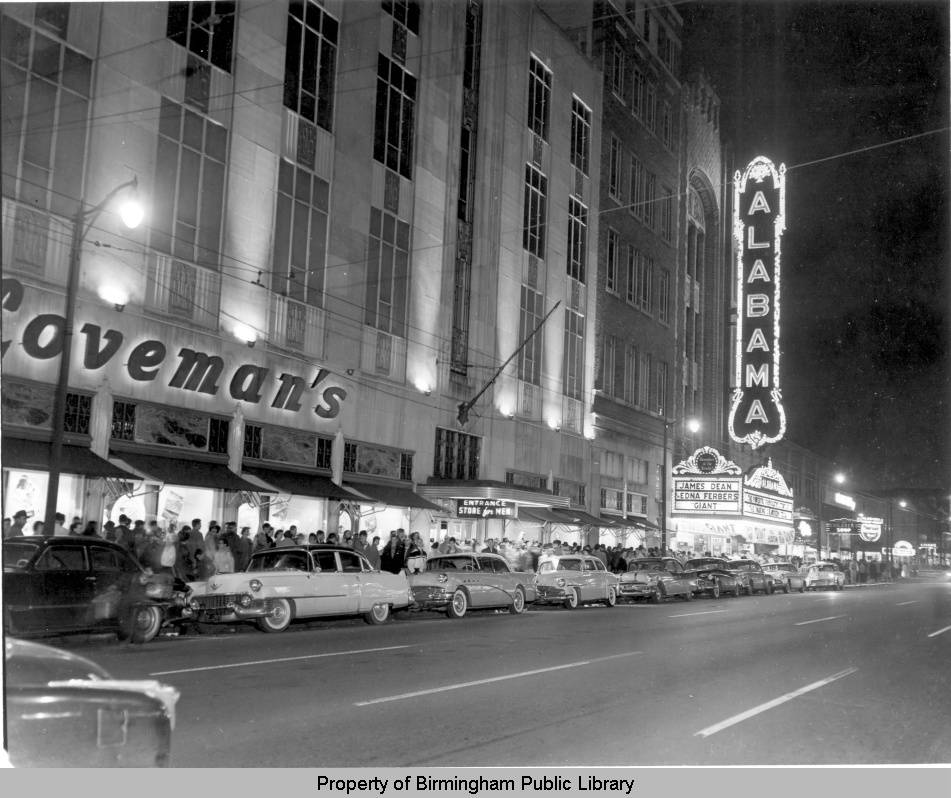 Alabama Theatre and Lovemans at night by Charles Preston 1957

The year 1957 brought another promotion directed at teens. High school students were encouraged to participate in Teentime at the Alabama where each Saturday morning a special stage show featured picked talent from the high schools of Birmingham and Jefferson’s County. 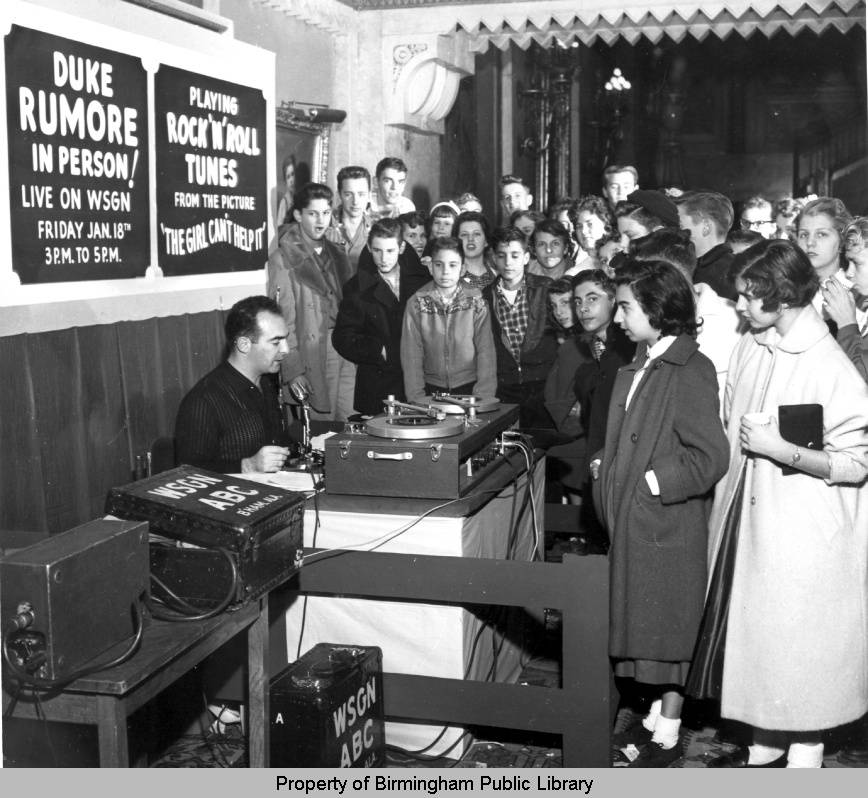 A special showing of a new feature picture followed the stage production. No small children were admitted and adults were allowed only if accompanied by teenagers. Talent scouts were reported to be in the audience. The shows were to be broadcast over radio station WSGN. The opening show featured guest stars Tommy Charles and popular singing star Martha Dean of Gadsden. 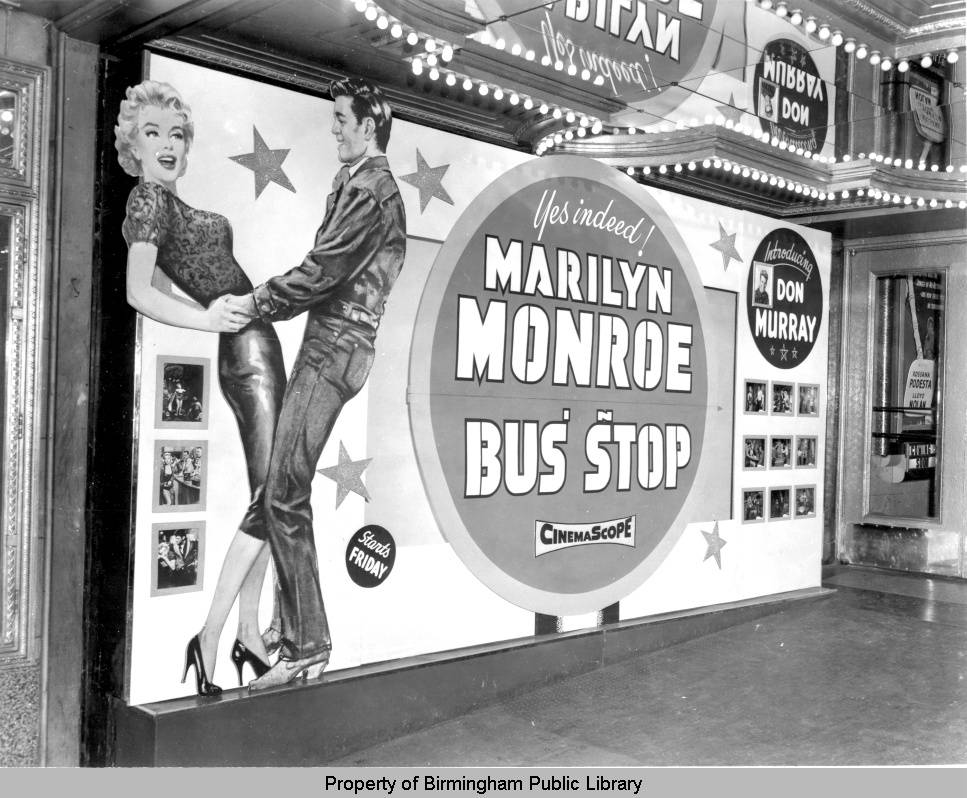 In the spring of 1959, ladies were invited to attend free Ladies’ Shopper Matinee parties at the Alabama Theater on Wednesday mornings which were sponsored by the Downtown Action Committee. Tickets were made available at downtown stores. Along with the free shows, fashion shows, door prizes, and other entertainment was provided. Secretaries were also saluted on National Secretaries Week. The show would start with organ music, followed by a fashion show, dancers, singers, or other entertainment. The free Wednesday shopping days which started in Birmingham soon spread to other cities throughout the South. Ladies Shopper Matinee parties continued throughout the 1960s. 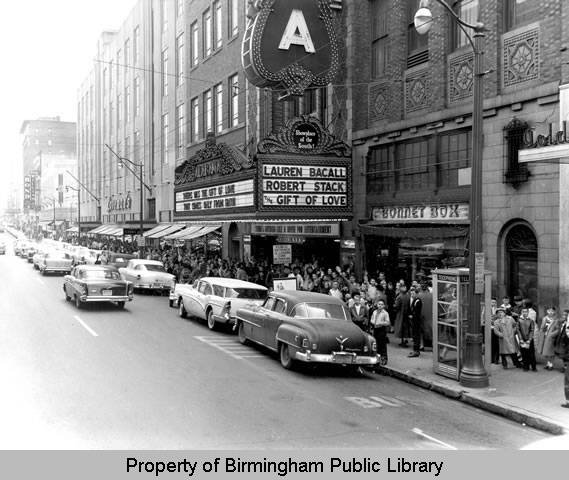 On April 17, 1972, Arthur G. Larson. the man who built the majestic Alabama theatre returned to Birmingham for a sentimental visit. He was 80-years of age at the time and was living in Chicago. As he observed the foyer, he stated, “I laid that slate floor in the foyer to the men’s room myself. There was no pattern for it in the blueprints, so I just got down on my hands and knees and made up a pattern, depending on how the pieces fitted together.”

In 1934, the Loveman’s department store which was a frame building built next door, burned to the ground while the Mickey Mouse Club was taking place next door. Larson’s foresight probably saved the Alabama theater from catching fire because he “personally supervised laying of the brick. Mortar had to be applied thoroughly so no smoke or fire could ever spread through.” The children and adults didn’t even know that Loveman’s was on fire until they walked out. 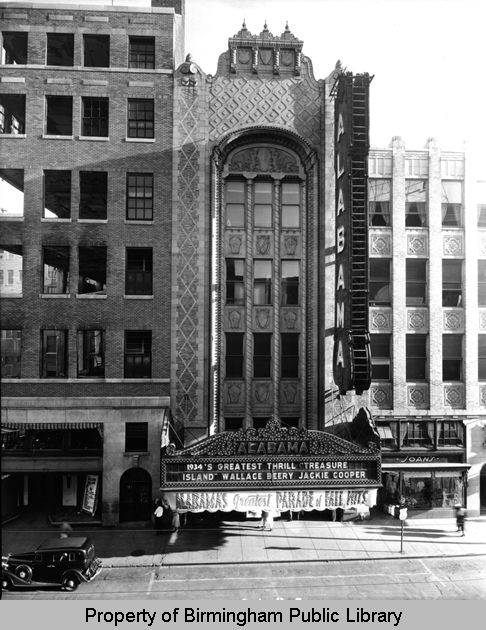 Alabama Theatre marquee  Treasure Island with Wallace Beery and Jackie Cooper. To the left is the burned-out shell of Loveman, Joseph and Loeb Departmen 1934

At the formal opening in 1927, every seat was filled. Construction costs of the Alabama were $1.5 million and several parts of the United States and numerous countries supplied the building materials.

Larson met his future wife in Birmingham. Mrs. Larson, who accompanied her husband on the return visit, stated, “It was against all my scruples to accept a blind date, especially late on a Saturday afternoon, but a close friend said he was too handsome to refuse, so I reluctantly accepted a date with him. I’ve loved him ever since I first saw him.”

The building was placed on the National Register of Historic places in 1979.

In 1987, the owners of the Alabama Theater declared bankruptcy and the theater was purchased by Birmingham Landmarks Inc., a non-profit corporation. In 1998, the Theater underwent a complete restoration and has been returned to its former 1927 grandeur which includes the original Mighty Wurlitzer Pipe Organ.

In 1993 the Alabama Theater received the designation of Official Historic Theatre of Alabama.

Discordance:The Cottinghams  Inspired by historical events and the Cottingham family of Alabama

Click here to check out all our books available on Amazon and if you are a member of Amazon Prime, you can receive two-day FREE SHIPPING!