On January 18th, 1818, Anne was in Melton’s Bluff, Alabama (now in Lawrence County, Alabama)where she met General Andrew Jackson whom she describes in this transcribed letter as well as a story about a woman she met who immigrated to Kentucky. General Jackson saved the woman’s life as well as her six children when she traveled through the wilderness alone. The letter has been transcribed exactly as published. (Including the misspellings)

The remainder of Mrs. Jones’ story is so interesting that I must finish it. It amounts to the following:—When she arrived at home, her father gave her, by way of compensation, one of those fine tracts of land on Kenhawa river, below the “Washington Lands.”

Meantime Jones, who was still unmarried, wandered about the Western frontier, furing, &c. and by sundry speculations, had collected a considerable sum of money; and the British, on their invasion of New Orleans, sending word to the citizens of Louisville, that they would dine with them the next day! many of the inhabitants became panic struck, and sold their possessions for a mere trifle.— Jones became one of the purchasers, and grew, suddenly, rich. He was offered, I think, and received, one hundred per cent, for a part of the property, next day, reserving the best for himself.

When Jones heard of Mrs. Robinson’s return, and death of her husband, he hastened to seek her; and, still retaining his partiality for her, and she for him, they were married.— She had been married about two years when I was at her house, and was in the act of packing up to remove to Louisville, where a splendid house and every thing that heart could wish was ready to receive her. I should have been much plea&ed to have seen Jones, but he was absent from home. I however saw a very handsome child, better than a year old, the fruits of their union. Let any of your novel writers beat this! Mrs. Jones’ children were very stout, and the oldest was nearly a woman grown.

General Jackson was kind to his soldiers

Many similar acts of kindness, as related above, are told of General Jackson. He is represented as being particularly good and kind to his soldiers. One of his men informed me he would walk through the mud for miles, and let his sick men ride his horse. He would distribute his biscuit, tea, and whatever his private stores consisted of, amongst the sick, and go to the slaughter pen, and he and his suite would broil and eat the tripe, and other offal, without bread and without salt. 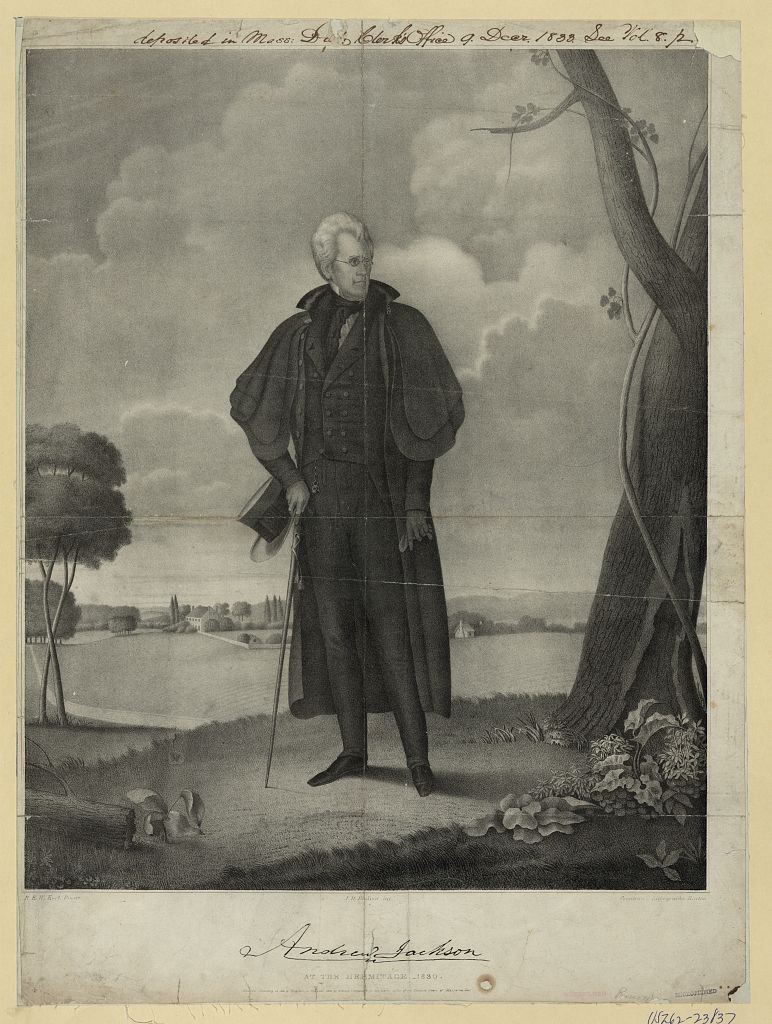 This man, also, stated to me, he was present at the battle of the Horse Shoe, and a squaw being killed by accident, her child was found alive, and at the breast of its dead mother.— The General was pierced to the heart, and taking the child in his arms, had it immediately fed and clothed, and hired a person to take it to Huntsville, to be nursed. He has adopted the child since, and calls it LeneourJackson, and both himself and Mrs. Jackson treats it with the utmost tendernes.

Helped a family with fever

Last fall General Jackson came to the Bluff, when every family was down with a fever, it being exceedingly sickly. Many of these were unable to give the others a drink of water. He had heard of the sickness of which his overseer had died, and of several of his slaves being confined at the same time.— Mrs. Mitchell, and her husband, (the merchant before mentioned) were lying, not able to rise, one in one bed, and the other opposite in another. She related to me, that the General and his suite would take the water buckets and go to the river for water; heat it over the fire, and take the sick in their arms, and placing their feet in the warm water, would thus support them, until they were sufficiently bathed, and then bear them back to their bed again.

After this the General would administer medicine with his own hands. Thus he went the whole night, and never ceased till he had administered the necessary wants to all, both black and white, and consoling them with the most soothing language. Mrs. M. said, the General had handled her as tenderly as though she were a babe; and when he left the place, he ordered a negro woman of his own to wait on all those who were without servants. You scarcely hear his name mentioned without the repetition of some generous act. Well may the people adore him as they do.

RIBBON OF LOVE: 2nd edition – A Novel of Colonial America