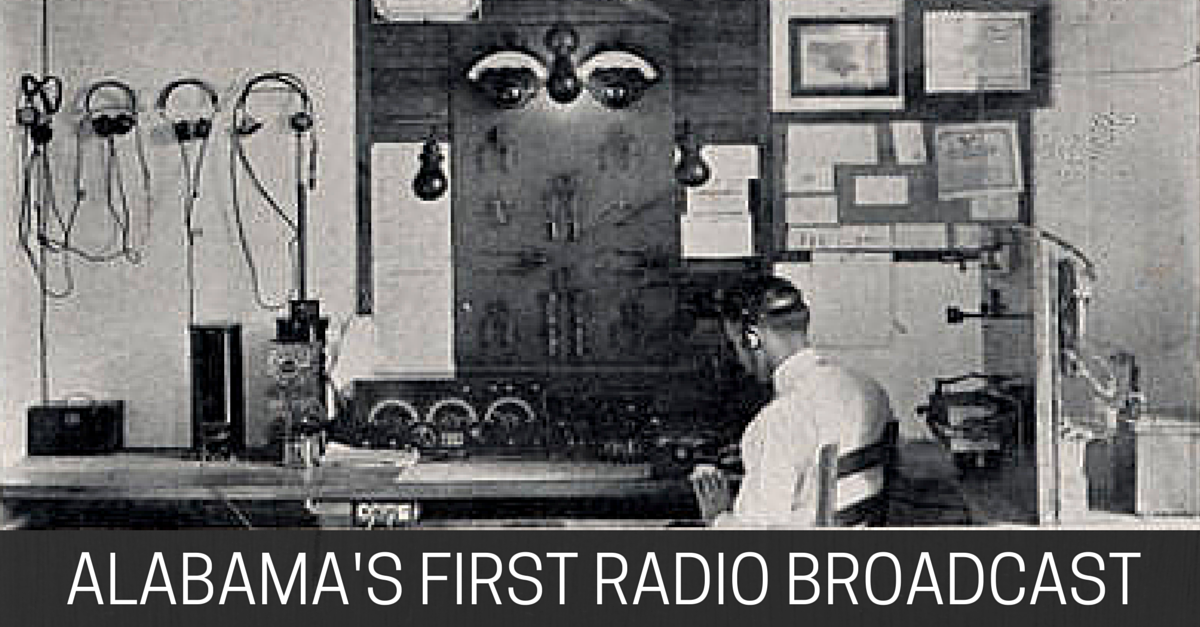 The state of Alabama did not have a licensed radio station until 1922. The first Alabama’s radio broadcast was made to Thomas Edison from Auburn University.   Continued below

Montgomery Light and Power got a license to broadcast with the call letters WGH on February 2, 1922. It was one of the first 100 companies to request. One month later, on March 29, 1922, Alabama Power got it’s license and on April 24, 1922, WSY, started broadcasting. WSY was the 127th radio stations in the United States, but these two stations were not the first radio broadcast in Alabama. That honor goes to Auburn University.

It all started when Dr. Miller Reese Hutchison, a native of Montrose, Alabama and a graduate of Alabama Polytechnic Institute in 1897 donated wireless equipment to his Alma Mater in 1911.

Dr. Miller Reese Hutchison  is almost unheard of in Alabama today, but he was a famous American inventor born in Alabama. Hutchison caught the eye of Thomas Edison and was employed by him. After several successful inventions, including a hearing-aid personally fitted for Queen Alexandria, the consort of Edward VII of England, Hutchison donated radio equipment to his Alma Mata in 1912. 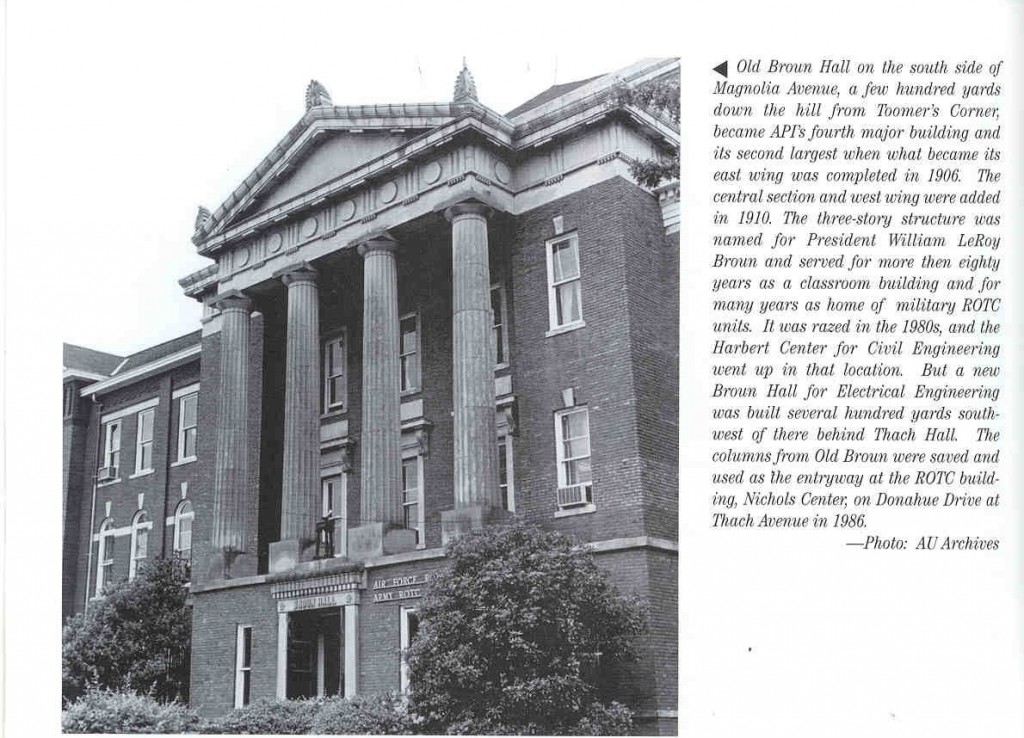 First transmission was to Thomas Edison

Hutchinson came down in June of 1913 to assist in the installation. The radio equipment was connected to a “150-feet steel pipe placed on the east end of Broun Hall running from a second floor room where the radio set was humming.” The first message (below) was sent out from Auburn to his boss in New Jersey, Thomas Edison:

“This wireless formally christens the two-and-a-half kilowatt apparatus which I have this day presented to the Alabama Polytechnic Institute in commemoration of the first homecoming of the alumni. The president, the faculty, the alumni, and the student body join me in expressing love and esteem to the father of electrical development.”

Dr. Miller Reese Huchison’s voice can be heard in the film below which was recorded on October 21, 1915, when a group of Thomas Edison’s friends and business associates played a recording in the library of the Edison Laboratory in West Orange, New Jersey and transmitted it to Edison at the Panama-Pacific International Exposition in San Francisco, California via the American Telephone and Telegraph Company’s newly completed transcontinental telephone line.

Dr. Miller Reese Hutchison’s is speaking. He was the Chief Engineer, Engineering Department of Thomas A. Edison, Incorporated.

Radio was banned during war years

During WWI, non-military radio was banned by the government due to a concern about spies, but it was continued again in 1919. Victor Caryl McIlvaine, a native of Florida, first became interested in wireless at the age of fourteen. “As a teenager, he constructed his own wireless receiver and taught himself to translate code. During WWI he contributed to the war effort by teaching wireless telegraphy to military personnel at the Alabama Polytechnic Institute.

After the war, he decided to matriculate as a student at the University and constructed a new wireless telegraph station for the school partly by using his own equipment. He was the founding member and president of the Radio Club, I Tappa Key. When the Department of Commerce granted a license, the broadcasters at Auburn requested a license with the name 5XA and two years later their first radio station was built and called WMAV (Making A Voice). Then a donation of $2500 by Birmingham News publisher, Victor Hanson, was donated to the Alabama Extension Service to establish a radio station to provide educational information to farmers. 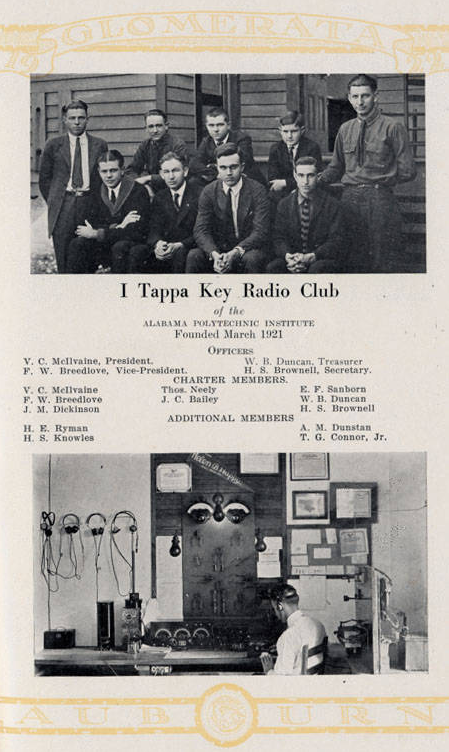 P. O. Davis of the Extension Service was assigned the task of establishing the radio station. However, it didn’t immediately materialize due to insufficient funding. During the first year, WMAV mainly provided play-by-play action of Auburn’s football games.

P. O. Davis stated in an interview, “We pecked and struggled as best we could with the equipment that was almost obsolete by the time it was installed.” After acquiring entirely new equipment, Davis moved the facility to Comer Hall and was instrumental in working with agents to organize radio listening parties for audiences throughout the state — a practice that would foreshadow video-conferencing techniques common today. 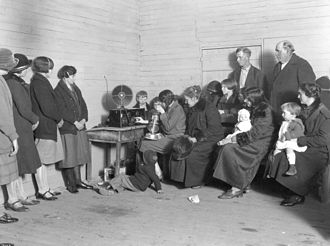 Montgomery, Alabama— Blind Bob Taylor, who sells candy and chewing gum on the streets of Montgomery, had quite an unusual experience Tuesday night at the radio station of the Montgomery Light and Water Power Company.

He was permitted to “listen in” and during the period he was listening a lively musical air was played in Pittsburg which he heard distinctly during the time he danced a lively jig.

Around the same time, a 500-Watt AM radio station was started by Alabama Power Company to help keep in touch with line crews in isolated areas. 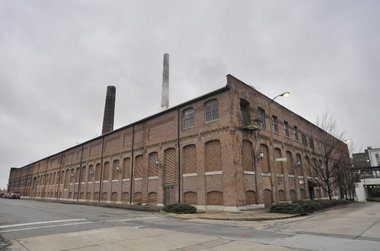 “The station was launched from a studio at 1921 Powell Avenue, adjacent to its steam plant. They utilized a “wired wireless” means of transmitting their signal from high-tension power lines in order to communicate to isolated steam plants and rural work crews.”

“Not long after, the company began receiving letters from residents across the state thanking them for broadcasting things like weather reports and making programming suggestions. The utility responded by adding interviews, stock quotes, an orchestra composed of Alabama Power employees, a show featuring a Tuskegee Institute quartet, and five Birmingham church services to their programming. As one of the country’s earliest radio stations, WSY had the ability to reach people as far away as Canada and Cuba and was hailed as the most popular radio station in the Eastern United States.”

in the Alabama Power building 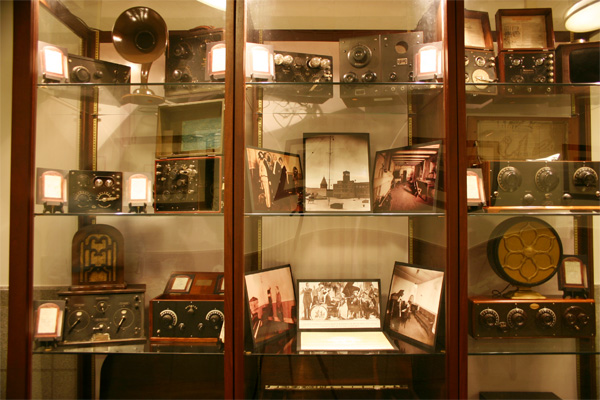 WSY Radio was too successful

The station’s studio was moved to the radio department in the top floor of the Loveman, Joseph & Loeb Department Store in Birmingham with the antenna strung between two rooftop towers. The success of WSY forced Alabama Power to decide if they should hire additional employees devoted solely to the radio station and update equipment or get out of the radio business altogether.

“Three years later, in 1928 WAPI moved back to Birmingham to provide a big city market for the two-year-old NBC Radio Network. The City of Birmingham agreed to pay half the operating costs for the station.  P. O. Davis negotiated with other state universities interesting in radio broadcasting, and from 1929 to 1932 WAPI was jointly-owned by Auburn (39%), the University of Alabama (39%), and the Alabama College for Women in Montevallo.” 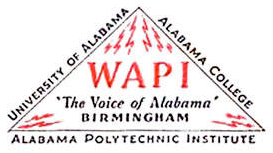 On November 11, 1929 the FRC approved a power increase to 5,000 Watts, and the new WAPI began broadcasting red and blue network NBC programming from studios on the 14th floor of the Protective Life Building downtown on December 31, 1929. The funding from the city of Birmingham was withdrawn during the Great Depression era so the station began accepting local commercial programming for the first time as it struggled to stay afloat.  In 1932 WAPI became a private business, with W. O. Pape forming the WAPI Broadcasting Company to lease the station. WAPI not only provided the three institutions with a broadcast presence but also ensured a “nice annual return on their investments” from about 1922 to 1961.

There is a museum on WSY in the Alabama Power Company Building located in Birmingham, Alabama at 600 N. 18th Street.

Radio has been a part of our lives so long that it is hard to remember there were days without it. When the radio was first invented people complained and threatened lawsuits. They said that the electrical waves were passing through their bodies, destroying their nerves and making it impossible for them to sleep. Today some people also claim that the very low-frequency field from overhead power cables near their homes has affected their health, although this has not been reliably proven.

(Some people believe that large doses of radio waves cause cancer, leukemia and other disorders.  This belief has been around since its invention and still continues today with waves emitted by cell phones. What do you believe?)

Inventor, Marconi, and how he was threatened with death/

Hear this amazing recording of the first transmission of the Morse Code!