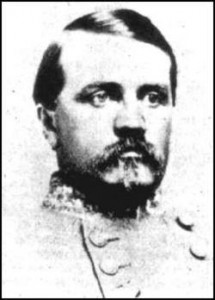 William Wirt Allen was born in 1835, in New York City, and died November 24, 1894, at Sheffield, Alabama. He was the son of Wade and Eliza (Sayre) Allen. He was educated in the schools of Montgomery and graduated from Princeton university. Afterward began the study of law but preferring the life of a planter he never engaged in the practice.

William entered the C. S. Army, in 1861, as first lieutenant of the cavalry company of which General Clanton was captain. He was elected and commissioned, March 18, 1862, major of the 1st Alabama cavalry, and later in the same year, was promoted to the colonel of the regiment. He was slightly wounded at Perryville and severely wounded at Murfreesboro. On February 26, 1864, he was commissioned brigadier general and took command of a brigade composed of men from several states.

At Marietta he was transferred to the command and the brigade composed of the 1st, 3rd, 4th, 9th, 12th and 51st Alabama cavalry regiments, Wheeler’s corps, Army of Tennessee, and was in charge of this brigade in the Atlanta campaign. In August, 1864, Crew’s Georgia brigade was added to his command and subsequently Anderson’s Confederate brigade. He passed into the Carolinas, at the head of this brigade, the commission of major-general was conferred upon him in March, 1865, and he surrendered at Salisbury, N. C., May 3, 1865.

Major General Allen again resumed his planting interests and was appointed adjutant-general of the Alabama in 1870. He became involved in the railroad industry and served for a time as a US Marshal. “Allen helped found and organize the Confederate Survivors Association of Montgomery. His bullet-holed uniform coat and his battle-flag are buried in the cornerstone of the Confederate monument in Montgomery.” He moved to Sheffield in 1893.