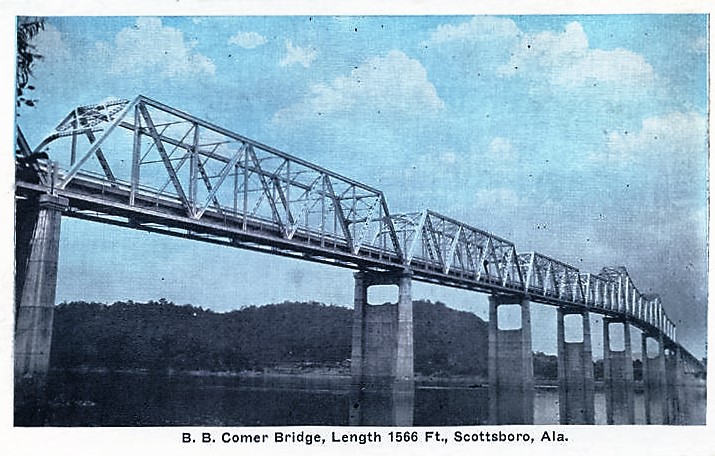 Construction of the B. B. Comer bridge was carried out by the Kansas City Bridge Company for the Alabama State Bridge Corporation. Its construction commenced in 1929 and was complete by 1931. As of 2013, this is the only remaining bridge of the 15 memorial toll bridges constructed by the Alabama State Bridge Corporation.  On April 29, 2016, the bridge closed to all traffic with the opening of the new bridge. Crews began removing the road deck immediately after closure. There was considerable excitement when it was first opened as can be seen by the story below.

B. B. COMER BRIDGE

(Transcribed from Alabama Historical Quarterly Volume I No. 3, 1930)

The first of the toll bridges spanning the Tennessee River to be dedicated, was the Comer Bridge, located near Scottsboro, in Jackson County. This structure was erected by the Kansas City Bridge Co., and formally delivered to the State Bridge Corporation on August 2nd, during the dedication of the bridge.

B. B. Comer Bridge postcard (Alabama Department of Archives and History)

Col. Woolsey Finnell accepted the structure which was formally named the Braxton Bragg Comer Bridge by Governor Bibb Graves. On the occasion of the dedication a eulogy on the life and public services of Governor Comer was pronounced by Mr. Erskine Ramsey, the distinguished industrialist of Birmingham.

Mr. J. F. Comer, son of the former Governor, made acknowledgments of appreciation on behalf of the Comer family. Miss Betty Comer, granddaughter and Miss Eugenia Dabney, great granddaughter of Governor Comer, unveiled the name plate. A memorial wreath was placed by Mrs. B. B. Comer and the benediction pronounced by Col. G. L. Comer. Mr. Sidney W. Lee presided at the exercises and the Rev. Frank Willis Barnett, who had offered the invocation at the Milner Bridge and the Bankhead Bridge, rendered that service also at the dedication of the Comer Bridge.

GOVERNOR B. B. COMER

Braxton Bragg Comer was born November 7, 1848, at Springhill, Barbour County. In 1864 young Comer was a student cadet at the University of Alabama and in the spring of that year his college career was cut short by the burning of his alma mater by the Federal commander, Gen. John C. Croxton, whose forces were making relentless raids in the western part of the State. With other members of the Cadet Corps, Comer joined in an effort to repel the invaders in what is known as the Battle of the Bridge. Following the destruction of the University the students were disbanded. After peace was restored Alabama’s future Governor entered the University of Georgia where he remained for a short time. In 1868 he entered Emory and Henry College in Virginia, where he graduated in 1869 with A. B. and A. M. degrees. 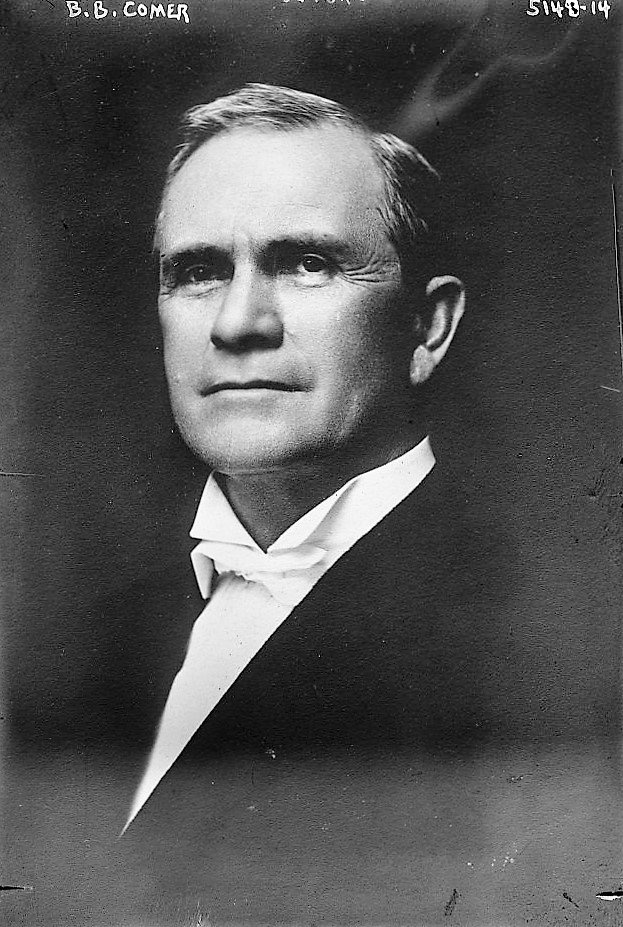 Governor Comer entered the business world as a country merchant, later removed to Anniston and finally located in Birmingham where he engaged in milling, in the banking business and in the manufacture of cotton goods. While still a private citizen he notified the public that it was paying the railroads too much for carrying their freight and that the railroads were not paying the State enough taxes according to their valuation and earning power. In order to put his views into operation he first announced as a candidate for the Presidency of the Railroad Commission, to which office he was elected. Feeling, however, that his views could not be made effective without executive approval he announced for Governor and was elected by an overwhelming majority. He went into office with both branches of the Legislature elected on the platform proposed by him and saw his views enacted into laws.

Having achieved the reforms that he had advocated on the platform Governor Comer initiated such a progressive educational program that even the leaders of the educational forces were astounded at his advanced views.

Large sums were appropriated for the improvement of old buildings at the various institutions of learning or the erection of new ones. State aid was provided for building rural school houses and large increases were made in the maintenance funds of all State institutions. It was during his administration and under his special leadership that a system of county high schools was established. The curriculum of the entire educational system was raised and the State was placed in the forefront of educational progress.

During his campaign for Governor, Comer stood with the leaders of the Prohibition movement whose efforts were being directed towards local or county option. The greater part of the State had already adopted Prohibition and during the last part of his administration a Statewide law was enacted placing Alabama in the “bone dry” column. A child labor law was passed restricting the age limit in the mills and requiring children under sixteen years of age to attend school at least eight consecutive weeks during the school term.

Upon the death of Senator John H. Bankhead, former Governor B. B. Comer was appointed by Governor Thomas E. Kilby to fill the position made vacant pending the Party Primaries of the Spring and the Fall elections. While his services as a Senator covered only eight months, was loyal to the interests of his constituents and by his vigorous personality impressed himself upon his colleagues in that august body.

The Comer Bridge, spanning the beautiful Tennessee River, is so situated that an extended view of the river and the beautiful mountain country for many miles meets the vision. The nearest town to the bridge is Scottsboro, the County seat of Jackson County. The town was named for Hon. Robert Scott, who owned the land on which it was founded. Jackson County as a unit was created by the Legislature December 13, 1819, and is therefore more than 100 years old.

Acquired from the Cherokees

The territory from which it was formed had just been acquired by treaty from the Cherokees, the most cultivated and civilized of all the Southern Indians. The county was named in honor of Gen. Andrew Jackson who had, with his Tennessee troops, assisted by the pioneers of the Territory, troops from Georgia and the few regular army troops, defeated the hostile red men in what is known as the Creek Indian War of 1813-14.

The beautiful elevations are a part of the Cumberland Mountains. Sand Mountain occupies the eastern and southeastern section. Cherokee traditional history holds that their people were the first settlers in the Tennessee Valley with villages extending as far west as Big Bear Creek. Prior to 1650 they withdrew, for some reason, to the east of the Cumberland and Sand Mountains, using the Tennessee Valley as a hunting ground.

The Shawnees took possession of this abandoned territory in 1660, an act that was resented by the Cherokees and in time brought on a war between the two, the Cherokees being aided by the Chickasaws. The Shawnees were expelled from the section about 1721 and driven across the Ohio River with the exception of some bands that found a home with the Creeks. About 1760 the Cherokees began again the formation of settlements in the Tennessee Valley. During the War Between the States federal troops burned the buildings at Bellefonte, which at one time was the County seat. It was following this destructive event that the new court house was built at Scottsboro.

(All biographical and historical data used in this article is from the four volume work, “History of Alabama and Dictionary of Alabama Biography,” by the late Thomas M. Owen.—Editor.)