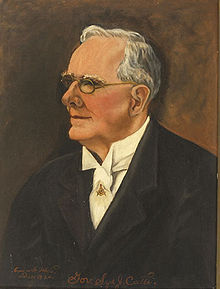 Sidney received his preliminary education in the private schools in Dallas county, Alabama then went three years to the Agricultural and Mechanical College at Auburn, Alabama. He attended Howard College in 1878 and graduated in Lebanon, Tennessee from Cumberland School of Law in 1882 with the degree of LL.B. He began his law practice in Dallas county, Alabama while he attended to his mother’s plantation for three years.

In 1904, he resigned Bethel Baptist at Ft. Deposit church, in a controversy because he did not receive enough from the church for missions and he did not want to attend the State Convention with short collections. The year before he had a candidate for Congress from the 5th Alabama district but was defeated by J. Thomas Heflin. He then entered into farming and mercantile ventures but at intervals, he preached to rural congregations. In 1911 he moved to De Funiak Springs, Florida, and became pastor of the First Baptist church for three years.

Sidney became the State agent for a fraternal life insurance company in Florida and entered the race for Governor of Florida in 1914. He made some American issues in this race as follows: “Nothing in Florida above the nation’s flag; the red school house against the Parochial school; all closed institutions in Florida to be opened by process of law and America for Americans first, last and forever.”

In 1916 the State canvassing board gave him a certificate of nomination for Governor of Florida by the Democratic party as a result of the June primaries and the following November, over the protest of all party politicians, courthouse rings, the Supreme Court decisions and every known political agent and device in Florida, he was elected by a majority of practically ten thousand.

In discussing some of the unusual aspects of his success in the primaries a Florida newspaper said editorially: ” The successful candidate was an entire stranger to the people of Florida when he announced his candidacy. His first announcements were greeted with derision—as a political joke. It is doubtful if there were more than a dozen citizens of Florida who entertained the slightest idea that he had a possible chance. Yet he defeated four of the strongest and best-known men in the State. He had against him not only these four men and their following, but practically the solid liquor influence, office-holding influence, Catholic influence, and the State press. He made the race practically without a campaign fund. Throughout the campaign he boldly denounced from the stump certain things which no candidate for office in Florida had ever dared to denounce, pursuing a campaign policy which had always theretofore been considered equivalent to political suicide. Yet this man, a new comer, virtually a stranger, with no record of public performance to stand upon, with no part in the history of the State, political, commercial or otherwise, has been chosen as its governor. His friends were concerned for his personal safety, and within the State and without they warned him of the possibility of assassination. His fight for the democratic nomination was made with the support of the Guardians of Liberty and a large number of prohibitionists. It cost him to make the race less than half as much as any of his opponents spent.”

As Governor he advocated: Prohibition, Federal Aid Road Act, Inheritance Tax, State Tax Commission, Vocational Education, change in election laws, simplifying the same, taxation of church property with the exception of the church and pastor’s home, opening closed institutions, same school license for public, private and denominational school teachers, drainage of Everglades, increased pensions for old soldiers, Seminole Reservation, a Flag Law for the State, benefit tax on right to hold large bodies of land, bank guarantee fund, laws favoring federation of labor, better shipping facilities for the producer, gross tax receipts on corporations, lowering legal rate of interest, and a new provision in the history of the world whereby a new office is created for the prisoner Icn^wn by the name of “The Friend of the Convicts,” whose duty it shall be to remain in prison, come in contact with the convicts, learn their stories of sorrow, desolateness and woe, form a fiduciary relation with these people to such a degree that this man shall in virtue take their part as an advocate even as the Son of Man came to earth and took the part of a lost and ruined world.

Sidney Johnstone Catts was a member of the Masonic Order, the Woodmen of the World, the Junior Order of American Mechanics, Knights of Pythias and the Guardians of Liberty. He was also a minister of the Missionary Baptist church, in good standing with the local church at Tallahassee, Florida and also a member of the farmers’ organizations of every kind. He had a deep sympathy with the federated societies of labor.

Sidney found his chief recreation in getting up at daylight, working his garden, and was a constant reader; having read possibly all of the literature that is current in the libraries of the State and all private libraries at his disposal. He sometimes read on a dead stretch of eight and ten hours, lying at length upon a couch with one arm thrown over his head and the other holding a book as he absorbed its contents. He was a leader of men and fearless in what he thought was right. Sidney was equally fearless in advocating his denunciations of wrong.

He was abrupt, reserved in manner and hard to make friends with, but once his friend he never deserted those who were tied to him. He was married at the age of twenty-three in Montgomery, Alabama, to Alice May Campbell of that Montgomery She was a daughter of Marcus B. Campbell and Alice May Campbell. Her parents were full-blooded Scotch and descended from Lord Colin Campbell.

Sidney Johnstone Catts’ maternal parentage was of Irish descent. His mother was Adelien R. Smiley whose parents came from Carie Tergus, Ireland, and settled in Edgefield district, South Carolina, before the war of the Revolution.

Captain John Smiley his maternal great-grandfather, was a commander of troops in the State of South Carolina during the Revolutionary War. On his father’s side he is in direct lineal descent from Jacob Catts, the Dutch poet of Holland, who was recognized as the Shakespeare of Holland and went to the court of St. James as a minister plenipotentiary to plead against Catholic persecutions over the Holland Dutch Reform Protestants.

Sidney and his wife Alice May (Campbell) Catts were the parents of eight children. Two children died before 1904. Known children include:

Governor Sidney Johnstone Catts died March 9, 1936, in DeFuniak Springs, Florida and is buried in Magnolia Cemetery, DeFuniak Springs, Walton County, Florida along with his wife and many members of his family. (Note: There are two other Catts girls buried in the same cemetery. These may be their daughters, Ruth Catts Cawthon and May H. Catts or at least some relationship to the family)