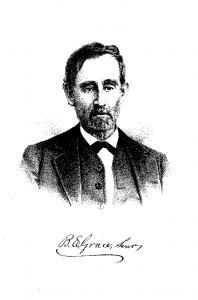 The early days of this century brought forth men of hardy frames, indomitable energy, and undying patriotism. On the 12th of November, 1808, Baylis Earle Grace was born in Abbeville district, South Carolina to James and Mary (Acker) Grace.

His middle name was bestowed upon him by his parents in honor of General J. B. Earle, many of whose descendants lived in Jefferson County. When an infant the parents of Mr. Grace moved to Jackson County, Tennessee, and when he was twelve years of age they removed to Jefferson County, Alabama, and settled near Jonesboro. His father, James had traveled through the area of Jones Valley with Andrew Jackson’s army.

“Mr. Grace entered Alabama at the time it was admitted into the Union and has seen it rise from a wilderness to one of the proudest and richest of the galaxy of Southern States.” There were only a few hundred families in Jones Valley when the family first arrived. In those early days, educational advantages were limited, and Mr. Grace attended school but one year, near the spot where Woodward’s furnace now stands, under the tuition of Thomas Carroll. The schoolhouse was a log cabin without any floor.

Among his schoolmates were several pupils who afterward rose to distinction, such as John W. Henley, the father of Dr. A. T. Henley, and William King, both of whom became distinguished lawyers; Drayton Nabers, the father of Dr. F. D. Nabers, also two daughters of Isham Harrison, Eliza and Laura; the first named became the wife of Dr. B. W. Earle, and Laura married the late William H. Jack, an eminent lawyer of Texas.

Mr. Grace was left an orphan at an early age, and being the only child of a widowed mother, her support fell upon his shoulders. “But he descended from a line of revolutionary ancestors, and the indomitable spirit burned in his breast that his forefathers displayed in their struggles for independence.” His grandfather, Joseph Grace, surrendered his life for his country in the battle of Eutaw Springs. His grandmother, Mrs. Catherine Elizabeth Grace, set fire to her own house rather than allow it to shelter the enemy. Her Spartan courage was mentioned highly by Mrs. Elliott in her work, “Women of the Revolution.”

It was this same hardy courage that fired Thomas Grace with the “pioneer spirit of Daniel Boone and impelled him to carve out a home in the virgin wilds of Kentucky, and inspired Elihu C. Grace to offer five sons to the Southern Confederacy, and has won success in the battle of life for Rev. W. C. Grace, of Tennessee, Colonel Preston Grace, of Arkansas, and other descendants. It was this high sense of justice and right that has prevented the name from ever being stained by crime.

The efforts of Mr. Grace in making his way in the world were successful, and in 1827 he was taken into the circuit clerk’s office at Elyton by Harrison W. Goyne, as his assistant, and transacted most of the business. At the end of the term he was elected to this office by a vote of the people over Hugh M. Caruthers, a very popular man, and was re-elected in 1835 and 1839, but before the expiration of his last term he resigned and moved- to the country at the place known as Grace’s Gap, where the L. & N. road cuts through Red Mountain. During his term of office, “Mr. Grace kept the neatest set of books ever known in the county, and they are now in the archives of the county in the courthouse in Birmingham.”

In 1844 Mr. Grace was elected sheriff of Jefferson County, but as the sheriff can only serve one term he was not a candidate for re-election. When the law was passed requiring the lands to be assessed by sectional divisions, he was appointed by Judge Forrest to make the first assessment, which duty he performed to the satisfaction of all concerned. “In 1859 he was appointed the general administrator and guardian for the county and held the office until 1863. In his public trusts as well as private duties he was the same honest, earnest, faithful man. The people delighted to honor his sterling qualities of head and heart. He never had an enemy. His modesty has often held him back from places of preferment. He was a gentle man.”

His second wife was Miss Ann Eliza Cantley, daughter of Hon. John Cantley, a member of the legislature from Jefferson County. A grandson was the part proprietor and manager of the Birmingham Daily Chronicle. Mr. Grace has by “hard study made considerable literary attainments, and his articles to the press have been widely read and admired. He was one of the first newspaper men of the county and edited the Central Alabamian, the successor to the Jones Valley Times, the first paper published in the county, a file of which is now preserved by the Tennessee Historical Society.

A vein of poetry runs through his nature, and he has often successfully invoked the muse. He was also a musician and has delighted his friends with selections on the flute.

He was often the winner of the beef at shooting matches. His rifle was a very fine one, the gift of an admiring stock drover from Tennessee, who stopped overnight on his way South. It was the custom at these matches to divide the beef into five quarters, the fore and hind quarters, and the hide and tallow made the fifth.”

His eldest son, Rev. F. M. Baylis spoke of him; “My father’s people were Baptist but he was more a man of the world, moralist or rationalist, than a sectarian of any kind. Hunting, politics, and music were his diversions. He was fond of poetry and read Burns, Scott, Campbell, Thompson’s “Seasons,” Young’s “Night Thoughts,” and Shakespeare. Walter Scott’s novels were a treasure in the household. Henry Clay was my father’s political idol in early life, but he drifted into the Democratic and Secession party before the War. My mother read the Bible a great deal, but my father never formed the habit of reading the Bible and was an irregular attendant at church, going more for the sake of oratory than the doctrine.

Mr. Grace was the first person to attach any importance to the Red Mountain as a mineral deposit. He had the first iron made that was ever made from the ore of that mountain, by sending a two-horse wagon load to the puddling furnace of Col. Jonathan Newton Smith of Bibb County, who had it smelted and hammered into bars, and it was pronounced by the blacksmiths equal to Swede iron. He afterward made the first sale of iron ore for manufacturing purposes. The sale was made to Colonel John T. Milner for the use of the Oxmoor Company, and from this land, they drew their principal supply of ore.

He first recognized the abilities of Major Thomas Peters, who came to Jefferson County prospecting after the war, and he took the Major to his home and encouraged him in developing those grand ideas which, now in the full fruition of realization, have challenged the wonder and admiration of the civilized world. “For some years Mr. Grace was the agent of the Thomas Iron Company, of Pennsylvania, and all of their magnificent iron and coal lands, which they are now developing by building furnaces and founding a town near Birmingham, were purchased by him.

It was through his faith in the possibilities of this mineral district and his representations of its unequaled advantages that these Pennsylvania iron kings were induced to invest here. Their investment attracted the attention of other capitalists, and the impetus was given to iron making that has carried the Birmingham district to the first place in the new world.”

Mr. Grace resided one mile from Birmingham and surrounded by home comforts and the amenities of an extended social circle he enjoys life with a zest equaled by few. “He was a living example of the healthfulness of Jones Valley, and his pure and honest life has preserved him to a green old age. He was a firm believer in the great future of this country. He had seen the land for which he gave a few dollars an acre increase in value to $10,000 an acre.

It was his daily custom to ride into the city on business, and he met hundreds of his friends who were glad to grasp his hand and look in the eyes of an honest man-“the noblest work of God.” Of all the men who crowd the busy marts of trade there were none whose memories reach farther back into the annals of the history of Jefferson County. He was a link that binds the past to the present.” Birmingham Illustrated” said: ”