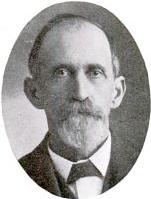 David Alen Aderholt, a real estate dealer, was born in Lincolnton, Lincoln County, N. C, November 25, 1842, (tombstone says Oct. 27, 1841) the son of Frederick William Aderholt and Anna (Baker) Aderholt, the former a native of North Carolina, of German ancestry, and a farmer, who removed to Alabama.

Mr. Aderholt was educated in St. Clair County and enlisted in 1861 as a private in Co. H, 58th Alabama infantry regiment and was successively promoted to the captaincy of his company. From 1866 to 1870 he engaged in a general mercantile business, then he became a real estate dealer; was mayor of Springville, 1878-85; member of the legislature, 1882-83; president of the Springville school board, six years; member of the town council, for three years; trustee of the State normal school, Jacksonville, 1883 to 1891. He was a Democrat; a Mason – (member of Masonic Lodge 280 and Roslin Chapter 88); and a member of Cumberland Presbyterian Church.

“Mr. Aderholt was always interested in the welfare of the community and was one of the organizers of the Spring Lake college at Springville and one of the first in his section of the State to develop and procure iron ore and ship it to Tennessee.

David A. Aderholt married: in 1870, to Amanda Hester Cowden, of Blount County.

They had the following known children:

David A. Aderholt and his wife’s residence in 1921 was Springville, Alabama. He died in April 1925 and is buried in Springville Cemetery, Springville, St. Clair County, Alabama where his wife is also buried. She died in 1929