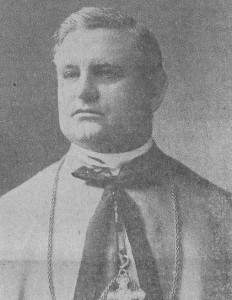 Edward Patrick Allen, D. D., Roman Catholic bishop of the Diocese of Mobile, was born March 17, 1853, in Lowell, Massachusetts, the son of John and Mary (Egan) Allen. His father was a native of Edenderry, Kings County, Ireland.

The Allen, Egan, and O’Connor families suffered severely through confiscation of their property because of their fidelity to the Catholic faith during the religious wars of the sixteenth, seventeenth, and eighteenth centuries. The Most Rev. John Allen, Archbishop to Dublin, who was slain by Silken Thomas, son of the Earl of Desmond, in the council chamber of Dublin, in 1535, was a member of this family. The Egan family was a hereditary guardian of the Brehon law. The only copy of these laws now in existence was preserved in the Egan household. The O’Connors, who claimed direct descent from the chieftains of that sept, were robbed of their patrimony during the religious wars. John Allen came from Ireland and settled in Lowell, Mass., in 1841. He lived there until his death in 1882. He was in business in Lowell until 1865 and then lived on his farm near the city.

Edward Patrick Allen received his early education in the public schools of Lowell, Mass., and in the Lowell commercial college. He entered Mt. St. Mary’s college, at Emmitsburg, Md., and was graduated with honors A. M., 1878. In 1879, he entered the Mount St. Mary’s Theological Seminary to study for the priesthood. He was initiated into minor orders in 1880, ordained deacon in September 1881, and elevated to the priesthood, December 17, 1881, being ordained priest by Right Rev. Thomas A. Becker, of Savannah. He was immediately appointed a professor in his Alma Mater, where he taught English and Greek until the spring of 1882. At this time he was called to the east by the bishop of Boston, Most Rev. John J. Williams, D. D., who appointed him an assistant in the cathedral in that city. Later he was assigned to assist Rev. J. S. Cullen at Framingham and was appointed chaplain of the state reformatory at Sherborn, Mass.

In 1884, at the request of the president and faculty, Father Allen was returned to the staff of Mount St. Mary’s college. He was elected vice-president and treasurer of the college in 1884. and president, June 1885. During his administration, many improvements were made in the college and seminary, and the number of pupils in both departments was greatly increased. The college debt, amounting to sixty-five thousand dollars, was paid and new buildings were erected.

The degree of D. D. was conferred upon Father Allen by Georgetown college in 1889. He visited Europe in that year and Rome in 1892. He was elected fifth Bishop of Mobile in succession to Right Rev. Jeremiah O’Sullivan, D. D., and was consecrated May 16, 1897, in the cathedral at Baltimore, Md., by Cardinal Gibbons who was assisted by Bishop Fitzgerald of Little Rock, Ark., and Bishop Harkins of Providence, R. I. He was installed in his Cathedral Church in Mobile, May 30, 1897.

During his administration, the Catholic population of the diocese increased from 18,000 to 48,000 and the number of priests more than doubled. The diocese was devastated by a hurricane in September 1906, and many churches were totally or partially destroyed. With Father Allen’s guidance, they were repaired and rebuilt. Father Allen resided at 400 Government Street in Mobile, Alabama.

“Deeply concerned for the African American community, he invited the Josephite Fathers to direct the black missions in the diocese, founded St. Joseph’s College in order to “educate young colored men to be catechists and teachers,” and sanctioned the establishment of the Knights of Peter Claver.”

Allen died at age 73 on October 21, 1926, and was buried in the crypt of the Cathedral Basilica of the Immaculate Conception.