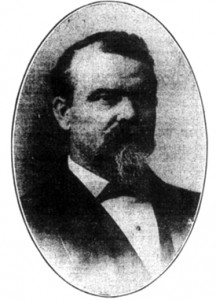 Frank P. O’Brien was one of the best known and most popular citizens of Birmingham. He born in the city of Dublin, Ireland. February 29, 1844. His parents were Michael A. and Mary (Corcoran) O’Brien, natives of Counties Limerick and Mayo respectively.

His father was educated for the priesthood, and for several years taught school in his native country, and was also connected with the Dublin Nation, edited by John Mitchell. In 1848 he emigrated with his family to America and located at Honesdale, Pennsylvania, where he resumed teaching for some time; also engaged in boating, having purchased and run two boats for three years, and subsequently removed to Scranton, Pennsylvania, where he was appointed superintendent of the Diamond Mines.

Frank P. O’Brien attended school from the age of five until fourteen years of age, when he ran away from home, at which period he began to learn the trade of scenic and fresco painter, under the instructions of the celebrated artist, Peter Schmidt, who secured the second prize for merit at Washington for work in the Capitol buildings. Mr. O’Brien followed his trade until 1874, coming to Montgomery,Alabama, in 1859, with Mr. Schmidt, who had contracted to paint the scenic and fresco work of the Montgomery Theatre.

In the spring of 1861 he joined the Independent Rifles, and with other young men went to Pensacola with the Second Alabama Regiment, returning in March, and April 30, 1861, he enlisted in the Montgomery Blues, which company was assigned to the Third Alabama Infantry Regiment, with Colonel Jones M. Withers, of Mobile, as First Colonel, and Tennant Lomax as Lieutenant Colonel, and subsequently for two years was in command of a body of scouts.

At the battle of Little Washington he was wounded, and remained three months in the hospital. Rejoining the company he was again wounded, and subsequently taken prisoner at the second fight of Plymouth, North Carolina, December 12, 1864, and confined until paroled February 1865. Rejoining his regiment he remained in service until the close of the war.

He remained in active business until 1871, when he went to Birmingham, and until 1883 was one of the leading contractors and builders and employed at one time three hundred and fifty men.

Mr. O’Brien was one of the heroes who stood at his post during the terrible cholera epidemic; nursing the sick and alleviating the wants of the needy, until stricken down by the dread disease which nearly cost him his life.

Mr. O’Brien erected some of the most substantial buildings in the city. In 1872 he erected the first place of amusement, Sublett Hall, on Second Avenue, and conducted it as a place of amusement for two years. He superintended the construction of the rolling mills, and also built many of the coke ovens for the Pratt Coal & Iron Company and Alice Furnace Company. He also conducted a planing mill, and was engaged largely in manufacturing sash, doors, blinds, etc., and brought to the State of Alabama the first steam machinery for making brick.

The building known as O’Brien’s Opera House was the most substantial monument to his energy and enterprise. The building was commenced in May 1882, and finished in November of the same year, and was one of the most imposing in the city; its dimensions are 100 x 140 feet, four stories in height, and contained one of the finest appointed opera houses in the South. It had a seating capacity of one thousand two hundred and sixty-six. The other portions of the building were occupied as business rooms and offices. Mr. O’Brien refurnished and enlarged his house the following summer.

Mr. O’Brien was one of the most enterprising and popular men of the city, and as a manager, through his determination to exclude all companies that did not furnish entertainments of an elevating nature, has established the reputation of Birmingham as one of the best theatrical cities in the South. He was vice-president of the Southern Theatrical Circuit, which has twenty-three opera houses and theatres in it.

O’Brien was Jefferson County Sheriff from 1896 to 1900. He ran unsuccessfully for mayor against incumbent George Ward in the 1907 mayoral election. He was elected in the 1909 Birmingham mayoral election and served most of one term as mayor, before his death in 1910. He supported the Greater Birmingham proposal to bring outlying suburbs into the city, but did not live to see it pass in the legislature. He is buried at Oak Hill Cemetery.