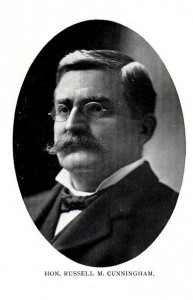 Dr. Russsell McWhortor Cunningham, of Ensley, Alabama., was born Aug. 25, 1855, at Mt. Hope, Lawrence county, and is the son of Moses W. Cunningham, a native of Tennessee, who resided in Lawrence county and his wife Nancy Caroline Russell.

Dr. Cunningham’s education was received in the common schools of the county and at the age of seventeen began teaching school and farming. He began his study of medicine in March 1871, under Dr. John M. Clark, a distinguished physician of North Alabama. In 1874-75 he attended the Louisville Medical college.

In 1878-79 he attended Bellevue Hospital Medical college, New York, where he graduated. He was professor of principles and practice of medicine in the Birmingham Medical college and was appointed physician of the State penitentiary in 1881 and moved to Wetumpka.

In Ensley, he began to compile the first reliable statistics on prison mortality rates in Alabama, and his recommendations concerning health, sanitation, and work hours reduced the death rate among Alabama convicts, who were leased to work in industry, from 18 percent per annum to 2.83 percent per annum by October 1884.

In 1883, when prison reform legislation required him to establish his residence where most state convicts were employed, the Pratt mines, he moved to the Birmingham industrial district. In 1885, he became physician and surgeon at the Pratt mines and at the Ensley division of the Tennessee Coal, Iron, and Railroad Company, the largest industrial concern in the district and one of the major leasers of convicts.

He also became the company physician at the Alabama Steel and Ship Building Company, established a private infirmary at Ensley, served as a county health officer, and held numerous positions of leadership in local, state, and regional medical associations. In October 1894, he and eight other Birmingham physicians opened a private medical school in which he taught physical diagnosis and clinical medicine.

The school in Birmingham set off a rivalry with the previously established public institution in Mobile, a competition that Birmingham ultimately won. In the literature of his profession Dr. Cunningham has written for medical journals and societies various articles and papers, notably upon “Croupous Pneumonia,” “Tuberculosis,” “Morbidity and Mortality of Negro Convicts,” “The General Practitioner in Gynecology,” “The Relation of the Cause to the Prognosis and Treatment of Fracture,” etc.

Dr. Cunningham organized and was master of Florida lodge No. 450, Ancient Free and Accepted Masons, for five years, from 1885; was organizer and high priest for two years of Pratt City chapter No. 108, Royal Arch Masons; was eminent commander of Cyrene commandery No. 10, Knights Templar, for two years; potentate of Zamora temple, A. A. or M. S., one year; and grand commander Knights Templar one year.

For a number of years he was a member of the committee on work in the grand lodge, Ancient Free and Accepted Masons of Alabama, and for two years was chairman of that committee. He was for two years in each position of junior warden, senior warden, deputy grand master in the grand lodge, and was elected grand master in 1900, serving until December, 1902.

Dr.Cunningham has enjoyed the unique distinction of being grandmaster of Masons and grand commander of Knights Templar of Alabama at the same time. Coincident with these social distinctions and professional labors, Dr. Cunningham was active in political life. He represented Franklin county in the general assembly, 1880-81, was senator from Jefferson county, 1896-1900, and was chosen president of the senate in 1898.

He was elected the first lieutenant-governor under the new constitution in November 1902, on the ticket with William D. Jelks. defeating Charles P. Lane, Republican candidate, of Huntsville. On April 25, 1904, when Jelks left the state to recuperate from tuberculosis, Cunningham took over his duties and served almost a year.

While serving as governor, Cunningham attempted to bring greater regulation of railroad rates, an issue that had affected the 1902 election and would reemerge in the 1906 governor’s race. He assisted Jelks in devising reforms in the convict-lease system in what he thought were some of the “best works” of his public career.

A member of the Committee on Temperance in the 1880s and a Baptist, Cunningham supported local option (whereby each county decides whether to support prohibition), later campaigned for a statewide prohibition amendment and endorsed the Eighteenth Amendment to the U.S. Constitution.

On other issues, he expressed an interest inadequate funding for education and in fair and honest elections, and he actively pressed for safety and sanitation inspections of coal mines. Because the new constitution did not allow elected officials to succeed themselves, Cunningham was expected to be the next governor.

He announced his candidacy for the Democratic nomination, but his hopes were not fulfilled. Braxton Bragg Comer, a businessman and textile-mill owner from Birmingham and the sole elected representative on the state’s railroad commission, seized on the regulation issue and announced his candidacy. In 1902, the State Democratic Executive Committee agreed to a direct primary for officials who were elected statewide.

The Democratic primary would soon be the most important election held in Alabama, far more critical than the November election. Cunningham was backed by many of the leading newspapers in the state, whereas Comer enjoyed the support only of the Birmingham News.

Although Cunningham was considered the candidate of the conservative wing of the party, his platform was, in many ways, as “progressive” as that of Comer, who wore that title. Cunningham praised Comer’s work on the railroad commission but reminded voters that he urged reform in that arena as well. Both candidates supported increased spending for education, pensions for the state’s Confederate veterans, and road improvements. Cunningham stressed the continuing need for reform of the convict-lease system, but Comer emphasized railroad regulation to the exclusion of almost all other issues.

In a contest that lasted almost a year, Cunningham spoke in every county in the state and held several debates with Comer. Cunningham favored a stronger child labor law than his opponent, and the Montgomery Advertiser attempted to discredit Comer by pointing out that he employed children in his Avondale textile mill. Even this charge failed to stem the rising popular support for Comer. Cunningham lost the Democratic nomination bid in August 1906, and a new era was launched in Alabama as Comer supporters also won a majority of seats in the state’s legislature.

At the expiration of his term of office Cunningham returned to his medical practice in Jefferson County and worked on the manuscript for his autobiography, in which he stated that losing the governor’s race was the best thing that could have happened to him.

He was a Baptist and a Democrat. On August 13, 1876, he married Sue L. Moore daughter of Judge J. E. Moore, of Franklin county and they had one son. After his first wife died, Cunningham married AnniceTaylor of Birmingham. Russell McWhorter Cunningham died in Birmingham on June 6, 1921 and is buried in Elmwood Cemetery.

Since he was a Grand Master of Masons, his biography and photograph are also included in The Grand Masters of Free & Accepted Masons of the State of Alabama 1811-2011