[Have you ever heard of this romantic Indian legend of Cheaha State Park? Scroll down to watch the film below of Cheaha from 1937] 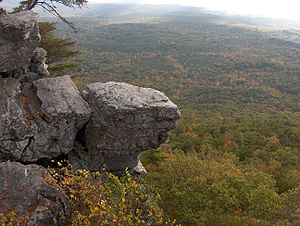 Many years before the white man penetrated the forests of Alabama, there dwelt a happy, thrifty tribe of Indians in the central portion of the present county of Talladega. The chief of this tribe was the great Choccolocco; a man of vast possessions. He had only one daughter, the Princess Talladega, whom he treasured above all possessed.

Talladega, as every princess should be, was the most beautiful maiden in all the realm. Choccolocco, realizing that he could not continuously keep Talladega within the walls of his selfish heart and domain, began to cast about for a suitable mate for his treasured daughter.

Now, in those days, as well as in these, one had only to think a thing, and the world anticipated the unspoken thought, and ran away with it. It so happened that great chiefs, mighty and rich, old and young, from far and near, began to make offers of handsome gifts to the stern old Choccolocco for the hand of his daughter. Some found favor in the sight of Choccolocco,but Talladega said: “Nay. Give me time. The right companion will come along some day, who loves the things that I love, and we can be happy wandering through life together.”

The Building of Cheaha State Park by the CCC

Time passed on, until one dawn of an April day, Talladega wandered down a winding path to the sparkling spring at the foot of the hill. The world seemed lovely in spite of the scheming father. Suddenly she heard a song in the distance. It was beautiful. The song grew nearer and nearer, and more beautiful, until the singer burst into view, as Talladega dipped her earthen pot into the water.

She met the dark eyes of a comely young warrior, and at that moment she knew that in some way their future would be linked together. Thus began, in the spring of that year, an affair which clandestinely grew beyond the imagination of Choccolocco. Each morning a song was answered, a friendship ripened, and a love was strengthened.

The wooing progressed, until one day Talladega, approaching her cabin, heard voices. Her name was mentioned. To her dismay, he realized that Cheaha, an ugly old chief from an adjoining province, was bargaining with Choccolocco. As she caught the glowering eyes of Cheaha, she immediately knew that she would not submit to wedlock with this eagle-eyed suitor.

After Cheaha left, Choccolocco informed Talladega that he was the favored chief, and that she would probably soon follow him to his province. Talladega slept none that night, and soon after dawn she was out awaiting the song of her young lover, Coosa.

It was indeed a sad morning they spent together. Coosa possessed no property, and he was so overcome with the helplessness and pathos of their situation, that he plunged into the woodland, where he wandered up and down the banks of his favorite stream for days. His thoughts were only of Talladega. He could see her reflection in the still waters; hear her voice in the rapids; and to this day the stream that bears her name still echoes the voice, and reflects the beauty of Talladega.

After Coosa had wandered for days, he decided that he could stand it no longer, and he went back to speak to Choccolocco. Coosa found him alone and he immediately stated his business. He told him that he was not a man of property, yet he was young, and taller, swifter and stronger than any warrior of the province; aside from this, he knew where valuable minerals were stored in lands unpossessed, and he would direct Choccolocco to them, whereby he could enrich himself more plentifully than any chief in all the land. In fact, he plead so appealingly, and painted a picture so enticing, that Choccolocco listened with growing interest.

“If you can bring me samples of valuable ores, and assure me of the possibility of ownership,” said Choccolocco “I shall consider you proposition more fully.”

There was never a happier being since the world began than was Coosa at his hopeful remark. Turning he found that someone else had joined them, and from the scowl on his face, he discerned that this was the erstwhile acceptable suitor, who had overheard the latter part of Choccolocco’s remarks.

Cheaha turned without a word. An idea was brewing. He hastened to put it into action. He had brought with him two young warriors, whom he immediately dispatched, one for a famous medicine man of his tribe, and the other to follow Coosa. The medicine man had discovered an herb that would put the strongest of men immediately to sleep, and he could not be aroused until the antidote was administered; that antidote being known to none but the medicine man himself.

Along about nightfall the young warrior who followed Coosa returned with the information that he had pitched camp at the west end of the valley.When Cheaha and the medicine man arrived they found Coosa peacefully sleeping, with arms folded on his breast and his face turned to the heavens.

The medicine man stealthily crept to the sleeping Coosa and quickly administered the drug. When he assured Cheaha that the drug had taken the desired effect, Cheaha cruelly turned on the medicine man and killed him on the spot.

In the meantime Choccolocco, becoming disgusted at the delay of Coosa, ordered wedding preparations for Talladega and Cheaha.

Talladega had discovered her sleeping lover, and made many secret visits to him whenever chance permitted. She became so depressed and unhappy as the wedding day approached, that Cheaha decided that it would be wise to tell Talladega that Coosa could never be awakened. Talladega said nothing.

She only sat motionless and gazed into space.

Although the drug was so powerful as to keep Coosa always sleeping, it also carried the power to make him grow, and while lying there sleeping, he has grown through the centuries until the mighty figure has become a great giant, now forming a mountain many miles long, where he can be seen form many roadsides. Mother Nature has lovingly covered him with earth, to protect him from the cold. She has planted trees and shrubs to shield him from the hot summer sun, and she has scattered flowers here and there, and each year birds flock to the Sleeping Giant to herald the coming of Spring. And there he lies, still dreaming of his beloved Talladega, “The Bride of the Mountain.”