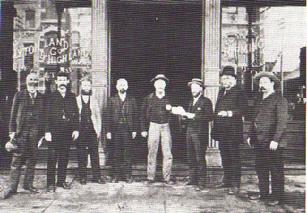 Jefferson county was created by an act of the legislature December 13, 1819. The territory from which this county was formed was taken from Blount County. Since 1890, however, a portion of Jefferson has been annexed to Walker, and a part of Shelby to Jefferson.The county has a total area of 719,360 acres, or 1,124 square miles.

The name was given to this county in honor of Thomas Jefferson, third president of the United States.

It is situated in the north central portion of the state, on the “southern extension of the Appalachian system and in the center of the rich iron, coal, and limestone belt of the south,” it is bounded on the north by Walker and Blount, on the east by St. Clair and Shelby, on the south by Tuscaloosa, Shelby and Bibb, and on the west by Tuscaloosa and Walker Counties.

The county is divided almost in half by a long narrow valley ranging from four to twelve miles in width, the upper part being known as Jones’ Valley, the lower half as Roup’s Valley. Northwest of this valley, are the “coal measures of the great Warrior field,” (q. v.), and on the southeast is the Cahaba field (q. v.).The principal drainage is into the Little Cahaba, Warrior, and Locust Fork Rivers.

The earliest settlers of Jefferson County say that the Indians did not use this area to live in, but that it was used by the Creeks, Choctaws and Cherokees as a hunting and ceremonial ground.

Scattered throughout the county are some evidences of aboriginal occupancy, though located as the territory is away from the more thickly peopled centers, these remains are not extensive. A group of mounds is to be found in T. 17 S. R. 1. W., four miles north of Birmingham. A large quadrangular mound a few miles from Elyton. Mounds and “furnaces” on Village Creek, were noted many years ago, as well as those near old Jonesborough (southwest from Bessemer), on Sec. 8, T. 19 S., R. 4 W., known as the Talley mounds. Indian graves have been found near Bullard’s Shoals on Valley Creek and on Red Mountain near Red Gap, in Sec. 21, T. 19 S., R. 4 W. opposite the Thomas McAdory place.

The earliest pioneers came to Jefferson County about 1815, and settled in Jones’ valley, the name being given in honor of one of the first settlers, John Jones. The first white child born in the county was Moses Field. Settlements were soon made at Village Springs, Turkey Creek, and Elyton.

The first regular term of the circuit court was held at a place called Carrollsville. In 1821 the seat of justice was removed to Elyton.

A company was raised in Jefferson County for the Seminole War of 1836, with James McAdory as Captain. This organization went to Florida and all but a few of its men returned, those not returning having died of disease.

Between the years of 1836 to 1861 the county increased in population and prosperity.

About 1823 a company was formed to make iron. The company secured the cooperation of Mr. Hillman of New Jersey, and “on a bold little stream which runs across Roupe Valley and empties its water in Shades Creek, near its mouth, he erected his little furnace, and with a large hammer propelled by water, hammered out a sufficient quantity of the best kind of tough metal to supply the county for some distance around.”

Jefferson County furnished its full quota of men to the Confederate Army.

The county site was changed from Elyton to Birmingham in 1871, the court house was burned in 1870 at the former place.